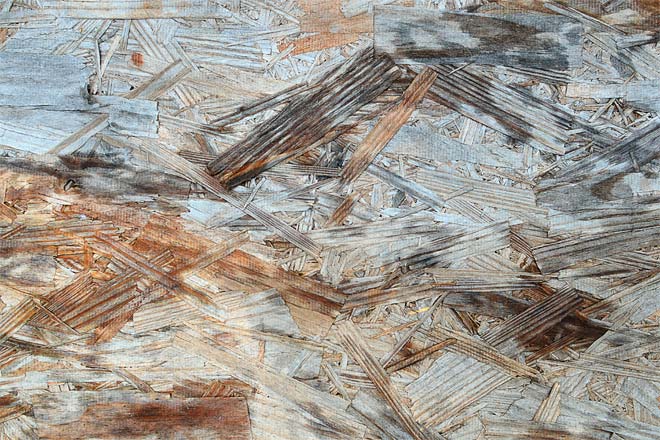 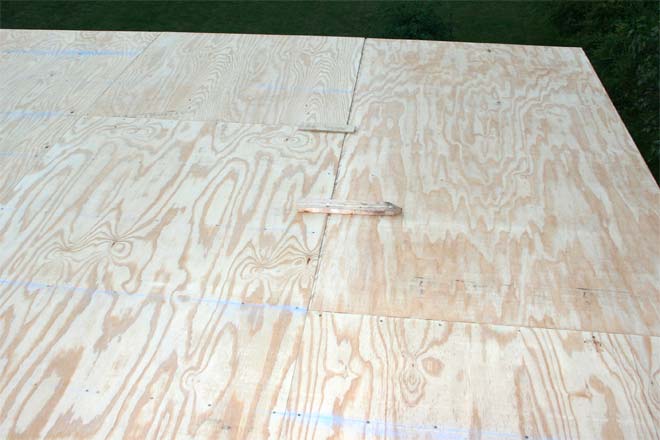 While OSB (Oriented Strand Board) is generally cheaper than plywood, it is heavier and not as stiff as plywood and can result in soft squeaky floors under weight. The biggest complaint against OSB is that it doesn't handle moisture very well so it is more suited for indoor use. Moisture also affects the strength of plywood; so while exterior glued plywood can be used outdoors, it works best when moisture content remains low. OSB has over 70% market share for structural panels. 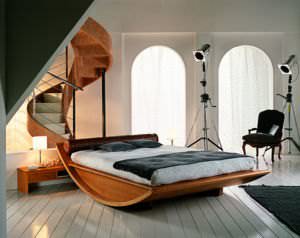 A bed made of Plywood and solid wood by Mazzali

Both plywood and oriented strand board (OSB) are equal in strength and durability. This comes as a surprise to many consumers because OSB looks simply as if lots of pieces of wood were glued together. Building codes recognize both plywood and OSB to be alike in their properties and use the phrase "wood structural panel" to describe them.

However, plywood subfloors are stiffer than OSB by about 10%. As a result, OSB floors are more likely to

Cost of Plywood vs OSB

OSB is cheaper than plywood by about $3 to $5 per panel. For a typical 2,400 sq. ft. home, OSB is about $700 less expensive compared with plywood if used as the subfloor, sheathing, and roof decking.[1]

Both plywood and OSB are used for sheathing roofs, walls and subfloors. They work equally well for these uses, are just as easy to drill into and have equivalent ability to hold nails. However, OSB is generally considered less resistant to water (it swells in thickness when exposed to moisture) and some people prefer plywood for roofs and subfloors. The Miami-Dade County Board of County Commissioners banned OSB for use as roof sheathing after Hurricane Andrew destroyed thousands of homes in 1992.[2]

Some builders find OSB panels easier to use because they have pre-printed gridlines to facilitate measuring, marking, cutting, and fastening. Plywood manufacturers have also introduced grid-marked sheathing, and it is advisable to use that because it speeds installation.

OSB panels can be manufactured in lengths up to 16 feet (or sometimes even higher), while plywood is generally limited to 8 to 10 feet. So OSB is preferable for applications where longer or wider panels are required.

It should be noted that some OSB manufacturers use advanced technology to make higher quality OSB panels, including more moisture-resistant products. These are more expensive than traditional oriented strandboards but may well be worth the price given their durability and performance.

As OSB is cheaper than plywood and has the strength and durability of plywood it is becoming more widely used than plywood. OSB was introduced in the 1970s and steadily gained market share from plywood, surpassing plywood in production in 2000. Today OSB has 70-75% market share and plywood has about 25% share.

Plywood is porous and is susceptible to damage when exposed to water for longer time. OSB is not water resistant and hence cannot be used for exterior projects.

OSB can be made from small diameter trees such as Poplar that can be farmed but plywood requires larger diameter trees from old-growth forests. On the other hand, OSB releases more formaldehyde (which is a carcinogen that is off-gased) than plywood.

Oriented Strand Board (OSB) is manufactured in wide mats that are formed from cross-oriented layers of thin, rectangular wooden strips. These layers are bonded using wax and resin. The layers are formed by shredding wood into strips. The strips are sifted and oriented in belts or wire cauls. The mat is formed in a forming line. The layers can vary in thickness to give different finished products.

Plywood is made from good log called peelers. Thin layers are peeled from the wood by rotating it along its horizontal axis. The sheets of veneer thus obtained are cut to the desired dimensions, dried, patched, glued together and then baked in a press at 140 °C (284 °F) and 1.9 MPa (280 psi) to form a plywood panel.