World War I (a.k.a the First World War, the Great War, the War To End All Wars) was centered on Europe. The world warring nations were divided into two groups namely ‘The Central Powers’ and ‘The Allied Powers’. The central powers group consisted of Germany, Austria-Hungary, Turkey and Bulgaria. The Allied powers group consisted of France, Britain, Russia, Italy, Japan, and (from 1917) the U.S.

Causes of the War

This video from Yale explains the events that led to World War I:

The Versailles Treaty signed at the end of World War I not only lay the moral blame of the conflict on Germany but also forced the Germans to make huge payments to the victors of the war. France and Britain needed these reparations payments in order to pay down their own debts. But they were highly onerous, arguably unjustifiably so, and were deeply unpopular in Germany. Hitler seized on this growing resentment and promised to "undo this injustice and tear up this treaty and restore Germany to its old greatness". In fact, the payments demanded were so large that Germany was able to repay the final installment of interest on this debt only on October 3, 2010.[1] The following causes of World War II are generally acknowledged:

The following documentary delves into the causes of World War II:

1919 A formal state of war between the two sides persisted for another seven months, until signing of the Treaty of Versailles with Germany on 28 June 1919

The war that broke out in 1939 was a war for the European balance of power. The immediate cause of the conflict was the German demand for the return of Danzig and part of the Polish ‘corridor’ granted to Poland from German territory in the Versailles Treaty of 1919. Poland refused to agree to German demands, and on 1 September 1939 overwhelming German forces launched the Polish campaign and defeated her in three weeks. Russia also invaded eastern Poland. Poland thus got divided into two parts. In March 1939 Britain and France had guaranteed Polish sovereignty, and in honor of that pledge first demanded that German forces withdraw, and then on 3 September declared war on Germany. America was committed by the Neutrality Acts of 1935 and 1937 of non-intervention in overseas conflicts.

This video presents a concise history of the events of World War II: 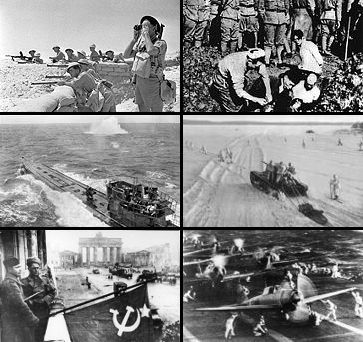 The entry of the USA signaled a change in the political balance of the war of great significance. German forces in Stalingrad surrendered in January 1943and by May 1943 Italian and German forces finally surrendered in Tunisia, enabling the Allies to mount the invasion of Sicily and then Italy. Italy sued for an armistice in September 1943.

American economic might and political interests helped to bind together the different fronts of conflict, while America's worldwide system of supply and logistics provided the sinews of war necessary to complete the defeat of the aggressor states. A major intelligence deception operation and declining air power weakened the German response and by September 1944 German forces had been driven from France.

This is actually really helpful if you'r learning about the ww1 and ww2- it makes things a lot easier. Thxs

this helped a lot

Genocide by Germany, was carried out on more than those listed.