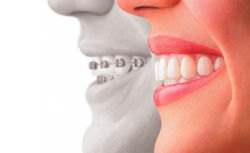 Treatment with traditional braces usually begins when x-rays, photographs and molds are taken of the teeth. These models are used to create the treatment plan. Metal rings known as bands may be placed on the back molar teeth for additional support. Then metal brackets are attached to the teeth with bonding cement, and wires are attached to the brackets with elastic bands. The wire is replaced and tightened every few weeks to move the teeth into place.

Invisalign treatment also begins with x-rays, pictures and impressions taken of the teeth. These are used to create a digital 3D image to plan the treatment. Clear, plastic aligners are then custom-made for the patient. Aligners should be worn at least 20 hours a day but can be removed when eating or brushing teeth. A new aligner is used every two weeks.

The duration of orthodontic treatment varies depending upon the severity of the problem. In general, braces and Invisalign tend to take roughly the same amount of time and have similar effectiveness for similar corrections, but treatment with Invisalign has been found to be faster in some instances.[1]

A study comparing outcomes for Invisalign and traditional braces concluded that "conventional fixed appliances achieved better results in the treatment of Class I mild crowding malocclusions". Another study found that

Invisalign was especially deficient in its ability to correct large anteroposterior discrepancies and occlusal contacts. The strengths of Invisalign were its ability to close spaces and correct anterior rotations and marginal ridge heights. Invisalign patients finished 4 months sooner than those with fixed appliances on average.

According to the Journal of Clinical Orthodontics in 2008, the average cost of a set of adult braces is $4,800. Invisalign cost an average of $500 more for a year’s worth of treatment than traditional braces, but can range from $3,500 to $8,000 depending on the duration of treatment and the severity of the problem being corrected.

Some insurance policies cover braces, but the coverage varies greatly between plans. For example, some insurance companies may cover 50% of the costs, but only up to a lifetime maximum of $1,000-$1,500. Insurance companies typically do not distinguish between braces and Invisalign — they are both considered equivalent orthodontic treatments.

Metal braces can lead to irritated cheeks and gums and cause pain and pressure whenever they are tightened. Invisalign braces have smooth edges, preventing them from catching on a patient’s cheek or gums. However, they still cause a little discomfort every two weeks when a new set of Invisalign braces is worn. Another advantage of Invisalign aligners is that they are removable so patients can brush their teeth and are not restricted in the type of food they can eat during treatment. Invisalign aligners also The aligners apply less force per week and cause less pain than do fixed appliances (traditional metal braces).

There are no such restrictions with Invisalign because the aligners are removed while eating.