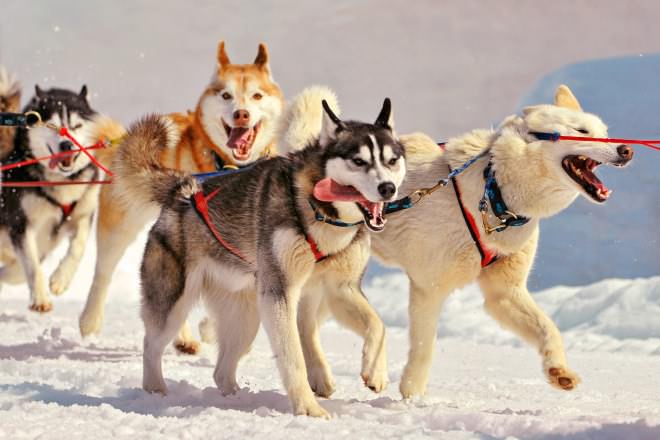 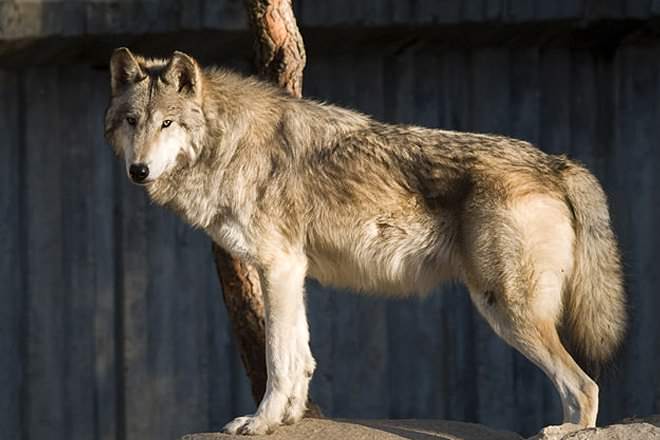 Dogs and wolves are actually the same species. Their physical appearance is similar but their instincts, disposition and temperament are widely different.

The gray wolf, or simply the wolf is the largest wild member of the Canidae family. The dog is the domesticated form of the gray wolf. Genetic drift studies and DNA sequencing confirm that domestic dog shares a common ancestry with the gray wolf. Eurasia and North America used to hold most of the world’s wolf population but the numbers have begun to dwindle due to human encroachment. Dogs are commonly seen in any place that is inhabited by people.

Dogs have relatively smaller skulls with varying muzzles, physically smaller brains, smaller teeth and varying leg lengths as compared to wolves. Smaller brains require less calories for dogs to survive. The paw of a dog is half the size of that of a wolf, and some dog's tails curl upwards, unlike that of a wolf. Dog teeth have less complicated cusp patterns and a much smaller tympanic bulla as compared to wolves.

Wolves have larger, broader skulls with a longer muzzle, physically larger brains, larger teeth and legs. They have a narrow chest with forelegs pressed into it. Elbows point inwards and feet point outwards. Also, wolves have a pre-caudal gland at the base of their tail used to release a pheromone onto another wolf, marking that wolf as a member of a particular pack. This gland is vestigial in dogs and functions only minimally in dogs.

[When we domesticated the wolves, they...] changed in body and temperament. Their skulls, teeth, and paws shrank. Their ears flopped. They gained a docile disposition, becoming both less frightening and less fearful. They learned to read the complex expressions that ripple across human faces. They turned into dogs. Dogs were the first domesticated animals, and their barks heralded the Anthropocene. We raised puppies well before we raised kittens or chickens; before we herded cows, goats, pigs, and sheep; before we planted rice, wheat, barley, and corn; before we remade the world.

Dogs have been domesticated for a very long time now, and understandably more responsive to domesticating techniques than wolves. Dogs respond to the voice; wolves to hand signals. The dog has lost some of its hunting ability because of domestication. But dogs can often read facial expressions of their human masters.

The wolf is a natural hunter. Wolf teeth are designed for hunting. Wolves have stronger molars than dogs, enabling them to crush large bones. Wolves could prey on little children. Dogs, on the other hand, are very friendly and playful towards children. Feral dogs have been known to kill small children and attack adults.

According to National Geographic's award-winning show, Dog Whisperer with Cesar Millan, humans need to dominate their pet dogs to get them to behave. The logic was that dogs are descended from wolves, and wolves live in hierarchical packs in which the aggressive alpha male rules over everyone else. However, many experts say Millan's philosophy is based on now-debunked animal studies and that some of his techniques - most famously the alpha roll, in which he pins a dog on its back and holds it by the throat - are downright cruel.

Most domestic dogs are sexually mature by the age of 6 to 12 months (some large breeds take slightly longer). Wolves reach sexual maturity after two or three years; that's when they leave their pack in search of a mate. Female wolves come into season or heat only once in a year, while domesticated female dogs heat two times a year. Only the alpha female wolf is allowed to breed. There is no such hierarchy or difference amongst dogs.

Wolves are social and live in packs. They need fenced yards and constant monitoring. Dogs generally live by themselves, and most need no containment. Wolves are generally more intelligent and more aware of their environment as compared to dogs. But when it comes to sociability, dogs are generally more sociable with animals and sometimes with other pets as well. It is almost impossible to house train a wolf. Dogs, because they're domesticated, can be trained with relative ease to follow commands and perform various tricks.

Scientists have found some key 'friendliness' genes in dogs that distinguish them from wolves. A study published in July 2017 concluded that there are genetic similarities between domesticated dogs and humans with Williams-Beuren syndrome (WBS), a multisystem congenital disorder characterized by hypersocial behavior.

...structural variants in GTF2I and GTF2IRD1, genes previously implicated in the behavioral phenotype of patients with WBS and contained within the WBS locus, contribute to extreme sociability in dogs. This finding suggests that there are commonalities in the genetic architecture of WBS and canine tameness and that directional selection may have targeted a unique set of linked behavioral genes of large phenotypic effect, allowing for rapid behavioral divergence of dogs and wolves, facilitating coexistence with humans.

Although dogs fall under the category of carnivore, they are largely omnivores and can digest a wide variety of foods like vegetables, grains, fruits, plants and meat. Wolves primarily feed off meat and even fish, and attack medium to large sized ungulates with their hunting prowess.

To say that dogs have lost there ability to hunt or do not form packs is inaccurate. Wild dogs live in packs just as wolves and they are arguably the most efficient cooperative hunters among all animals. Domestics dogs will also form packs. My two German Shepherds certainly have formed their pack with me as their leader. and domestics dogs will form hunting packs when they get lost or get dumped by their owners. They will hunt when they are hungry.

Dogs are a little different from wolves but they still have some wolfy abilities!

"A wolf's muzzle is longer" Than what? A Borzoi? Nope. Bigger feet? than a St. Bernard? Nope. Wolves are bigger....nope. Faster? Nope. Stronger? No.

Dogs are dogs. Wolves are dogs. DNA shows it. All breeds of dog have differences. Jack London lied.

Wolves aren't as small as people think. Average weights from arabian to alaskan wolves is 30 - 176 pounds. It is not uncommon for large wolf subspecies to weigh 200lb. Wolves have a very light build, so even though English Mastiffs can weigh 250 lbs doesn't mean they are bigger, just that they are very heavily built. If you don't belive my info, look up wolves of Alberta on bing. They are HUGE. I love dogs alot, and I loves wolves too, but dogs are my favorites.