An employee works directly for a company or another person and answers to an employer/manager. An independent contractor may work for a company or another person (or multiple companies/people) and accept direction, but this worker ultimately has more control over the work he or she accepts and how, when, and where it is produced. Employees often stay with one employer for an extended period of time, while an independent contractor will usually only work for a company on a single project or for a short time, though there are exceptions. In the United States, freelancers, sole proprietors, and independent contractors are all considered self-employed and therefore subject to self-employment tax. Employers must withhold a portion of their employees' salaries/wages for payroll taxes.

Who is an Employee?

Who is considered an employee and who is considered an independent contractor ultimately comes down to the law, particularly tax law. For employers, it can sometimes be difficult to determine whether the person they have hired is an employee or an independent contractor, with the U.S. Department of Labor saying that nearly 30% of employers incorrectly classify workers. However, it is hugely important that employers figure this out accurately, as not doing so may result in payment of back taxes, fines, and worker reimbursement. For workers, accurately defining their work type determines whether they are employees protected under the Fair Labor Standards Act or independent contractors who are not under such protections.

The IRS has a 20-point list to help employers determine whether someone they are working with is an employee or an independent contractor. These 20 points come under three main categories of common law rules:

It is also important for employers to learn their state's laws on independent contractors, as they may vary slightly from federal rules. This will matter for state and local taxes, as well as worker safety rules.

Typically, an employee will have the following characteristics:

In the past, there have sometimes been differences between independent contractors, freelancers, and those considered "self-employed," but the lines between the concepts have blurred over time or been erased entirely. Today, these labels are often used interchangeably, and the IRS classifies all as self-employment.

Who Is An Independent Contractor?

Self-employment has decreased in recent decades, particularly in the agriculture/farming industry. However, self-employment has sometimes increased in other industries, especially with the widespread adoption of the internet, which often provides an outlet for people to market their skills. The effects of the 2008-2009 global recession, such as high unemployment rates and decreased hours/wages, have also led some to become independent workers in an effort to take job security into their own hands. Of course, not all are able to regularly secure jobs as independent contractors. 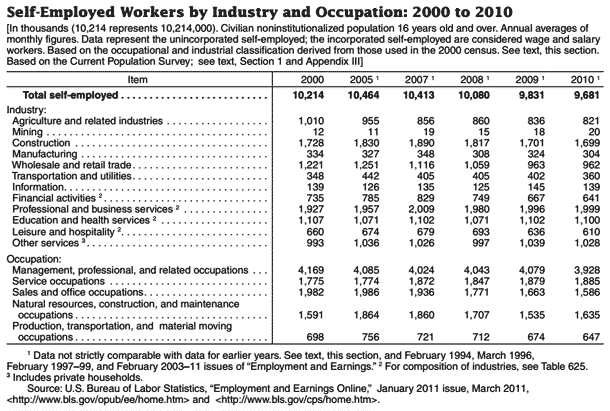 Typical characteristics of an independent contractor include:

In most cases, self-employed workers make more than employees in a comparable position in any given year. Their work lives are very different, however, and contractors must cover many expenses that employees do not have to consider, thus easily explaining this difference in earnings. It is difficult to determine who earns more by employment type and is therefore more reliable to look at industry.

Independent contractors need to charge more per hour than an employee is paid per hour. Contractors must charge more to accommodate the fact that they pay both personal income tax, as well as self-employment tax; cover all of their own insurance costs; and manage their own retirement plans.

Employers cover payroll taxes by withholding small percentages of their employees' income, which they then use to pay the U.S. government. The withheld amount goes toward funding Social Security and Medicare, as well as federal and state unemployment insurance, and sometimes state-based insurance services, like workers' compensation.

Self-employed workers must not only pay income tax, but also cover payroll taxes by way of Schedule SE (Form 1040). This is known as self-employment tax. Some wrongly believe that the effective tax rate for independent workers is much higher than it is for employees, but after deductions reduce taxable income for the self-employed, the effective tax rates of the self-employed and the traditionally employed are comparable. The amount independent workers should set aside for tax varies depending on their earnings and work-related expenses, but they should estimate their tax and pay toward it each quarter.

Independent contractors are more likely to be audited than employees because it can be easier for contractors to cheat the system through self-reported expenses and deductions. The chances of being audited are still slim overall, though — a less than one percent chance. Middle income earners are least likely to be audited, meaning low-earners and those who make over one million are generally under closer scrutiny.

Vacation time is very different for employees and independent contractors. In the United States, which is one of the only nations in the world without federally mandated vacation time, the self-employed may have greater freedom to take a day off when sick or to take a trip somewhere. However, this is not paid leave, and many independent workers may feel pressure to remain on the job as much as possible.

For employees, hours vary depending on the type of work and sometimes within a job itself, but they are generally more stable for the full-time employed. Larger companies may give paid leave and/or paid vacation time or unpaid time off.

Employees have more predictable work lives and protections, and sometimes work fewer hours, than independent contractors do. Self-employment is stressful. Still, the self-employed are much more satisfied with their work. In a 2009 survey, Pew Research found 95% of self-employed workers were completely or mostly satisfied with their jobs compared to 89% of traditional employees. Far more employees reported working for money (50%) than independent workers (38%), who often reported working because they wanted to (32%), or at least equally for both reasons. Other studies have found even higher job satisfaction among the self-employed.

Employees are heavily protected by labor laws and, in some cases, by labor unions. Independent contractors are not protected under most of these laws and may find themselves injured on a job, but without recourse; this can result in expensive and time-consuming lawsuits.

Laws vary by state, but most tie labor safety laws to a legal doctrine regarding "superiors," or bosses. Since self-employed independent contractors are considered free agents, they aren't seen as having a superior, thus labor laws fail to protect them. Some states have additional or modified protections, however, known as a peculiar risk doctrine; California is the main state with this doctrine. (Also see Workers' Compensation.)

Though the Affordable Care Act has sought to insure more people in the U.S., health coverage remains closely tied to employment, particularly when it comes to affordability and quality. Employer-sponsored health insurance, which is usually connected to full-time jobs in larger companies, is often more affordable because employers cover a sizable portion of the costs; the plans usually offer better coverage for the cost as well.

Employees are covered by unemployment insurance when they lose their jobs through no fault of their own (e.g., company downsizing). These benefits allow a person to look for new work without having bills loom over them in the process. How long someone can receive unemployment insurance varies by state, but most states honor claims for three to six months as of 2013. Prior to 2013, many states approved claims for much longer.

Independent contractors are not covered by unemployment insurance because they are their own "employers" and are therefore responsible for themselves. With independent contractors on the rise in some industries in recent years, this means there are more "noncovered" workers. This can matter more in some industries, like construction and real estate, than in others. With economies ever-changing, employees who are laid off may now be eligible for self-employment assistance, a government program that aims to help the unemployed start their own business. This is a state-based program, and not all states offer it. State unemployment insurance agencies and websites will be able to tell an unemployed person whether the program exists in his or her location.

Closely related to how safety regulations are handled differently for independent contractors than for employees, workers' compensation coverage generally does not apply to independent contractors, but sometimes may, depending on the state. To learn how this works in the State of New York, for example, watch the following video.

Many employees are familiar with and use company-run 401(k)s, some of which employers match contributions to up to a certain amount each year. Self-employed workers must completely manage their own retirement funds, usually by contributing to a variety of IRA types. (Employees also use IRAs when their employers offer no retirement or pension plans.) In Canada, RRSPs are an option.

Self-managing retirement can be difficult for some, and many Americans appear not to do it well, be they employees or independent contractors. The average American has less than $40,000 saved for retirement, and 28% of self-employed workers say they aren't saving at all.