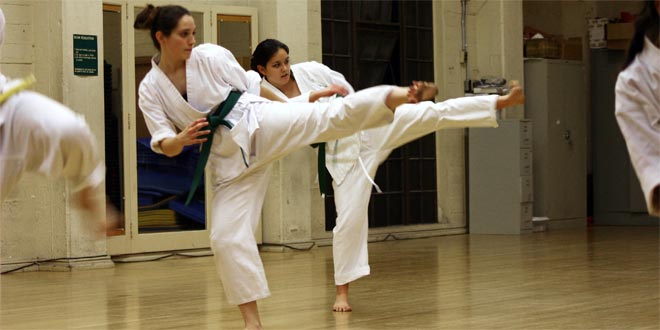 Karate and Kung Fu are different forms of oriental martial arts. Karate was developed in what is now Okinawa, Japan, and Kung Fu in China.

Karate is a form of unarmed Japanese martial art developed from fighting methods from the Ryūkyū Islands in Okinawa, Japan. Kung fu comprises a number of fighting styles that have developed over the centuries in China. It is also a form of exercise with a spiritual dimension stemming from concentration and self-discipline. 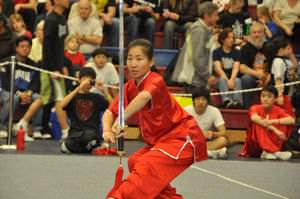 Karate is primarily a striking art, with punching, kicking, knee/elbow strikes, and open-handed techniques. The movements are crisp and linear.

The fluid, circular movements in Kung fu are often imitations of the fighting styles of animals, initiated from one of five basic foot positions: normal upright posture and the four stances called dragon, frog, horse riding, and snake. 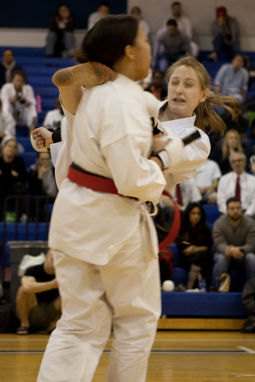 Contestants in a Karate tournament.

The traditional wear for Karate is a white uniform called a gi, with has a light, loose fitting. Due to the nature of Karate training which emphasizes striking, kicking and a limited range of standing throws, the karategi has evolved so as to maximizes mobility and speed. Most quality karategi are cut from a light canvas-like cloth which will stand up to a considerable amount of abuse without restricting the mobility. Different styles of Karate have slightly different uniforms though all share the same basic design, differing only in the lengths of sleeves, legs and the skirt of the uwagi (jacket). Many karate practitioners tend to wear their obi (belt) much longer than practitioners of judo and other martial artists. The color of the belt varies, depending on the rank. Black belt is the highest ranking belt. Karatekas generally practice barefoot.

Kung fu uniforms vary a lot in color, style and material. Most uniforms have tops with Chinese style buttons, unlike the overlapping tied-up fronts of a karategi. As opposed to the consistent white karategi, Kung fu uniforms come mostly in fabrics like satin in a variety of bright colors. Chinese martial arts schools in Asia do not show rankings in uniforms. Kung fu practitioners often wear shoes with the uniform.

The meaning of the term kara te is "empty hands." It refers to the fact that Karate originated as a system of self-defense which relied on the effective use of the unarmed body of the practitioner.

In Chinese, colloquially, kung fu (or gongfu) refers to any individual accomplishment or cultivated skill obtained by long and hard work. It also refers to the form of martial arts.

According to legend, the evolution of karate began over two thousand years ago, in fifth century BC when Bodhidharma (Indian Buddhist monk) arrived in Shaolin-si (small forest temple). From there it appeared in Okinawa, a Japanese Island.

As martial art, kung fu can be traced to the Zhou dynasty (1111–255 bc) and even earlier. As exercise it was practiced by the Daoists in the 5th century B.C.

please get it right for once. kungfu just means a "a man with substancial training or work" , hence it encompasses tens of thousands of style of martial arts, thus it includes karate also.
Example, a karateka went to china say 300 years ago, he would be considered a kungfu man. Kungfu connoisseur at the time would know the karateka 's movements resemble to a form of kata practiced in Shiaolin temple in China-thus people would say the man's kungfu has some leanage.
Since all martial arts originated from Shaolin temple which spread to China Korea Japan, inevitably a small Shiaolin branch went to an island in Japan; hence karate can not be used to include kungfu, the term kungfu is all inclusive and karate is not an exception. kungfu is a generic term to mean "work" for short, it's referring to any kind of style dating back to thousands of years. in sort, karate is a kungfu(work) style of the shaolin temple thus very specific. So, karate is Zenist kungfu, taichi is Daoist kungfu, etc.

Well that explanation is a little simplistic and could be said the other way around too. Karate just means an empty hand, so technically kungfu when practiced without a weapon is simply another form of karate. And the who is to say when someone has trained enough to be considered "enough experience" so there is no kungfu at all.

Notice how Karate is so much more common in the USA than Kung Fu is? Karate preaches a very small number of blocks and punches, and a small number of kicks. Every Karate style should be proficient in the crescent kick, spinning reverse back kick, front kick, side kick, and roundhouse kick. Whereas Kung Fu has many basic styles(tiger, crane, snake, eagle, dragon, praying mantis) and whereas Kung Fu has many techniques within each style; the secret of the Karateist is to be highly proficient in strong, fast kicks, punches, and blocks which all, in all, constitute just a small number of techniques and therefore not to be bound to rely on many, many techniques(as in Kung Fu), of which some techniques can be forgotten, take too long to remember in a real fight situation, slow up a person trying to remember in a fast moving fight situation, etc.

Why do some people say things like "kung fu fighters are faster than karate and so kung fu is better martial art" ?
Speed doesn't come from the martial art itself, it depends on the fighter who's using the martial art.....
And there is also a comment who said karate is not good for self defense.... but it actually depends on 'speed' and 'experience'.....
By the way kung fu is more popular and is more used often in movies.....