With 48% of Medicare beneficiaries subscribed to Medicare Advantage plans as of 2022, these private insurance alternatives are very popular and are among some of the most highly-rated health insurance plans in the U.S.

Original Medicare covers hospital care (Part A) and medical care (Part B). Prescription drug coverage (Part D) must be covered out-of-pocket, with separate private insurance, or with the help of Medicaid.

Medicare Advantage is legally required to cover everything covered by traditional Medicare, which is usually called "Original Medicare." Moreover, some Medicare Advantage plans may also offer other benefits. These plans typically include prescription drug coverage, for example, and may include vision, dental, and hearing care. Some even include benefits such as gym membership. However, benefits vary significantly between plans.

Watch the video below to learn more about how Medicare Advantage differs from Original Medicare and Medicare supplementals, such as Medigap.

While most doctors and hospitals accept Medicare, a small percentage (roughly 4%) refuse Medicare beneficiaries. And nearly 30% have reported experiencing difficulty in finding a doctor who would accept Medicare.

Cost of Medicare vs. Medicare Advantage

Medicare members pay standard rates for services, regardless of where they live. While Medicare Part A (hospital insurance) is usually covered for free by the government, Part B (outpatient medical coverage) costs $164.90 per month — or more if the individual’s annual income is greater than $97,000 (or $194,000 if married). Benefits kick in after a deductible of $226 per year. In addition to the premium and deductible, there is coinsurance of 20%, i.e., members must pay 20% of medical costs for all services covered by Parts A and B, such as extended hospital stays. Home health care services and hospice care are covered for free. Part D, which covers prescription costs and is bought through a private insurer, varies in cost from plan to plan, but according to CMS (Centers for Medicare & Medicaid Services), the average cost in 2023 is $31.50 per month.

With Medicare Advantage, you pay at least the premium you would pay for Medicare Part B. As described above, this is $164.90 per month for 2023 (or higher for people whose 2021 income was greater than certain thresholds). 69% of Medicare Advantage enrollees do not pay any supplemental premium over and above this Part B premium. Other members pay a monthly premium for prescription drug coverage. Premiums tend to range from $30-$65. This can be less than the cost of traditional Medicare, plus a Part D plan, plus Medigap coverage, but costs vary from plan to plan. 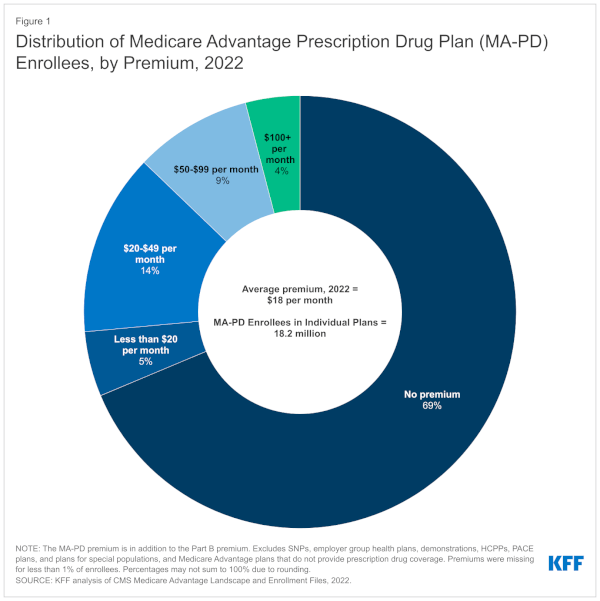 In addition to premiums, other costs for any health insurance plan are deductibles, copays and coinsurance. Medicare Advantage plans have set copays with doctors but may have higher copayments for expensive care, such as hospitalization or chemotherapy. Plans vary in the copays, deductibles and coinsurance they charge enrollees. It is very important to understand these out of pocket costs and make sure you are comfortable with the risks of these costs before signing up.

For Part A and Part B of Original Medicare, members must pay 100% of their healthcare costs before reaching their deductible. The deductible for Part A (hospital insurance) in 2023 is $1,600 per benefit period. A benefit period starts the day you're admitted as an inpatient at a hospital or skilled nursing facility, and ends when you haven't gotten any inpatient care for 60 days in a row. Depending upon when and how often you get hospitalized, you may pay the Part A deductible more than once per year with traditional Medicare. The deductible for Medicare Part B (outpatient services) is $226 per year. Medicare Part D (drug coverage) deductibles vary by plan and pharmacy.

Deductibles for Medicare Advantage also vary by plan. You can go to Medicare's plan comparison website to see various plan options and their respective premiums, benefits and out of pocket costs such as deductibles, copays and coinsurance.

Medicare enrollees pay 20% of costs after they reach a deductible. For inpatient hospital stays, members must pay a $1,600 deductible for the first 60 days, and then $400 of coinsurance/copay per day until day 90. After day 90, members can have another 60 days at $800 per day in their lifetimes, after which they must pay all costs. 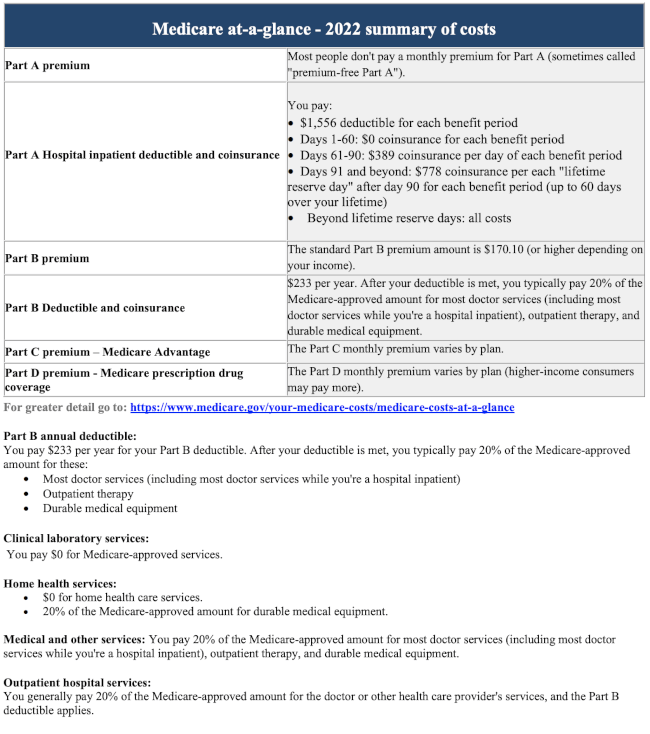 Some who have Part D (prescription coverage) must also pay a deductible, which varies by Part D plan. After the deductible has been paid, members may either have a copay program, where they pay a flat fee for each drug, or coinsurance program, where they pay a percentage of the cost. However, members may face the “donut hole”: after the total cost of drugs exceeds $2,850 in a year, members must pay 47.5% of the cost of brand-name drugs and 79% of the cost of generic drugs. Once the cost of drugs has exceeded $4,550, Medicare kicks in again, with 95% of drug costs covered.[1]

Under Medicare Advantage, tests and procedures must also be deemed necessary by the private insurance company, rather than simply the physician, or else the expenses must be paid out of pocket. Just as monthly premiums vary between Medicare Advantage plans, the deductibles and out-of-pocket costs also vary, so subscribers should be sure to check each individual plan and see exactly which drugs and procedures it covers and how much it will cost. However, it should be noted that Medicare Advantage cannot charge more than Original Medicare for services such as chemotherapy, dialysis, and nursing facility care.

Changes to Medicare Under the Affordable Care Act

In the past, government subsidies kept Medicare Advantage costs and premiums deceptively low. Some of these subsidies have been cut under the Affordable Care Act, partly because Medicare now covers many of the extra preventive services that were previously only covered by Medicare Advantage plans.[2] In response, private Medicare Advantage insurers may keep plans mostly the same, raise premiums, or cut certain benefits, such as vision or dental.[3]

Finally, all tests and procedures carried out on a Medicare Advantage plan must be deemed necessary by the insurance company, not merely the physician, to be covered. This can slow down payment and leave individuals with higher out-of-pocket costs if the insurer decides that a treatment is unnecessary.

Medicare Advantage plans are highly popular, particularly in the states of Hawaii, Minnesota, and Oregon. In at least one survey, users rated Medicare Advantage more favorably than any other type of health insurance or health assistance program in the U.S. 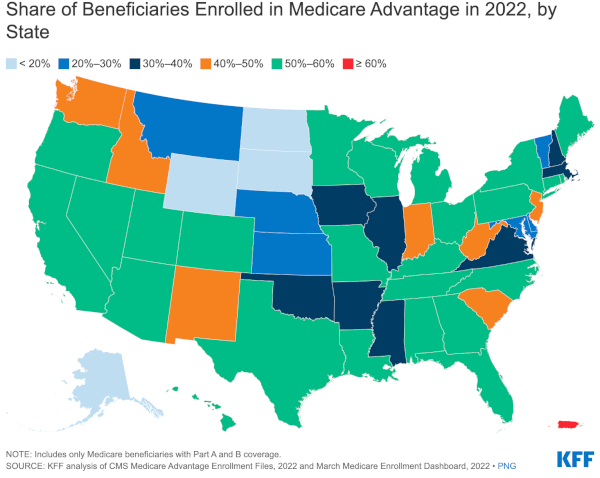