For people who prefer smaller phones, Apple released the iPhone SE on March 21, 2016. The new iPhone SE uses the same 64-bit A9 chip as the iPhone 6s, and offers most of the same features and capabilities of Apple's flagship phone in a smaller size.

The biggest difference in the two models of iPhone is the size. The iPhone SE has a smaller 4-inch display with a resolution of 1136 x 640 pixels compared with the iPhone 6s' 4.7-inch 1334x750 pixel display.

Both phones have a Retina display with a pixel density of 326 ppi (pixels per inch). The iPhone 6s has a significantly better contrast ratio of 1400:1 compared with the iPhone SE's 800:1. Theoretically this means a better picture quality for the iPhone 6s but in practice — for most people and for most pictures — the picture quality will be indistinguishable.

Another subtle difference in the displays for the iPhone SE and the iPhone 6s is dual domain pixels. The iPhone 6s display uses dual-domain pixels, which provides a wider viewing angle for the screen. In practice, this means an iPhone 6s user can view the contents of her phone at a sharper (wider) angle away from the device than an iPhone SE user would.

The iPhone SE offers great performance because it sports the newest Apple A9 chip, 2GB of RAM and several internal upgrades. The following scores on Geekbench benchmarks confirm this. More information about performance parity with the iPhone 6s can be found in this article. 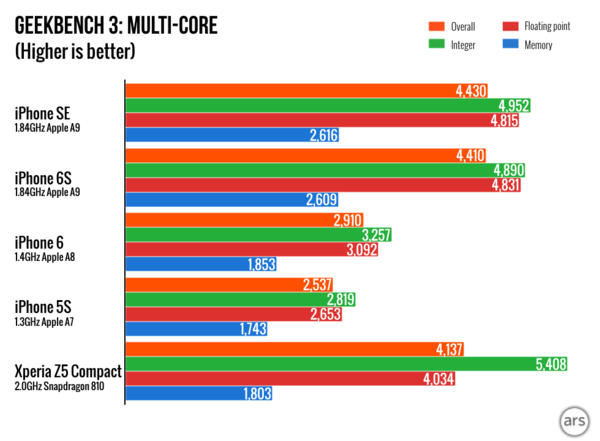 Fans of the smaller phone form factor rejoiced when Apple released the iPhone SE. Apple was lat to the party with larger phones. The iPhone 6 was Apple's first 4.7-inch phone and the iPhone 6 Plus was the company's first 5.5-inch phone. Both were released in the fall of 2014, at a time when Android rivals were doing pretty well in the market and demonstrated the need for larger phones. Apple resisted the idea that people wanted large phones but eventually succumbed to market forces.

The relative size of the iPhone SE (top) compared with the 6s (bottom).

There remains a significant market for smaller phones, however. In 2015, Apple sold 30 million iPhone 5s phones, which have 4-inch displays. The iPhone SE targets this market.

With a weight of just under 4 ounces and dimensions of 4.87x2.31 inches, the iPhone SE is definitely more pocket- and small-hands-friendly than the 5.04-ounce iPhone 6s, which measures 5.44x2.64 inches. Curiously, the iPhone SE is slightly thicker (7.6 mm) compared with the slimmer iPhone 6s (7.1 mm). 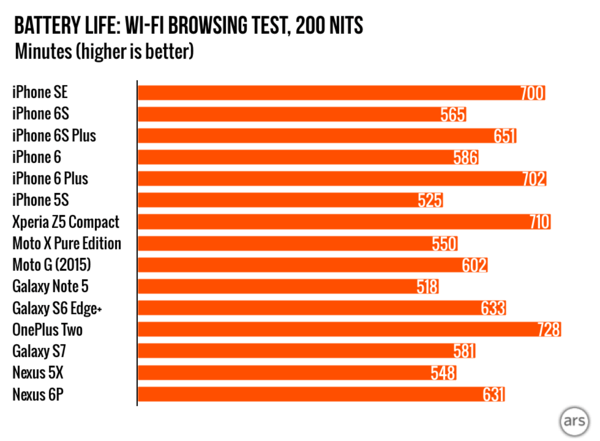 A comparison of the battery life of various iPhone models reveals that the iPhone SE has the best battery life. Image courtesy Ars Technica.

Both phones support LTE band 12, which is used by T-mobile and is a significant factor for T-mobile customers to consider, given the carriers very spotty LTE coverage when a device does not support band 12.

The flagship iPhone 6s also offers better Wi-Fi connectivity than the iPhone SE. While both phones support 802.11a/b/g/n/ac, the 6s uses MIMO for better throughput. The iPhone SE does not support MIMO.

The iPhone SE has all the sensors that the 6s has — fingerprint reader, 3‑axis gyro, accelerometer, proximity sensor and ambient light sensor— except the barometer. While the barometer is not widely used in apps, it is useful for calculating altitude. When an emergency call is placed to 911 using a smartphone, the Enhanced 911 protocol may be used. Smartphones send all sensor data — including barometer/altitude data — to the emergency dispatch.[1]

The barometer is also used by some apps for other use cases e.g. to figure out how many flights of stairs climbed, for indoor mapping, and crowdsourced weather forecasting.