HIV, or Human Immunodeficiency Virus, affects a person's immune system. If an HIV infection is left untreated, the immune system deteriorates and becomes increasingly susceptible to common viral and bacterial infections. AIDS, or Acquired Immune Deficiency Syndrome, is the final stage of HIV disease; it is characterized by a severely compromised immune system, as measured by the count of CD4 cells in the body. In recent years, HIV treatment has progressed to a point that a person infected with HIV — commonly known as being "HIV-positive" — can stay healthy without the infection progressing to the AIDS stage. There is no certain cure for HIV or AIDS at this time, but there are proven ways to prevent the spread of the virus and to slow the progress of HIV in those infected.

Relationship Between HIV and AIDS

As its name suggests, HIV is a virus that attacks the immune system, most notably the T-cells and CD4 cells, which fight other viruses in a healthy body. However, unlike common cold or flu viruses, HIV remains active in the body for life, often whittling away at the immune system until it can no longer function. At this point, the body is very susceptible to other illnesses, be they viral, bacterial, or cancerous.

HIV has three stages: acute infection, clinical latency, and AIDS. Each stage is related to a patient's CD4 count, or how many infection-fighting cells remain in the body. With proper, modern medical treatment, many people who are HIV-positive can live for decades in the clinical latency stage of the virus and therefore never develop AIDS. Without treatment, an HIV infection will progress to AIDS in about 10 to 12 years, which will lead to death.

The video below further explains the relationship between HIV and AIDS.

How HIV is Transmitted 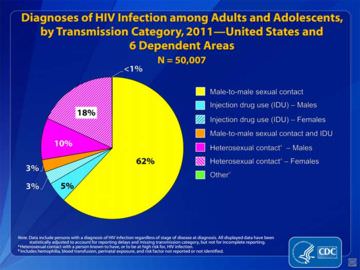 Click to enlarge. HIV transmission by category. Screenshot from a CDC presentation.

HIV is most commonly transmitted through sexual contact with someone who has HIV and through the sharing of needles with someone who has HIV, but the virus can be contracted in other ways. HIV specifically spreads through certain body fluids, including blood; pre-seminal fluid, semen, vaginal fluids, rectal fluids; and breast milk. For infection to occur, an infected person's body fluid must come into contact with an area of an uninfected person's body that can receive the virus, such as a mucous membrane (found in the vagina, rectum, opening of the penis, and the mouth), damaged tissue (e.g., a cut or similar wound), or — in the case of needle sharing — directly into the bloodstream.

There are numerous other ways one might contract HIV, but they are usually very rare in developed countries (e.g., via blood transfusion). Other factors may also increase the likelihood of infection when coming into contact with the virus.

Preventing the Spread of HIV

In the U.S., the FDA has approved Truvada as an HIV preventative for high-risk groups, namely men who have sex with other men. The drug is made up of a combination of antiretrovirals: Tenofovir and Emtricitabine. To learn more about Truvada, see this New York Times Q&A.

One out of every six people who has HIV does not know he or she is infected. HIV symptoms can be subtle, even to doctors, which is why regular HIV testing — once or twice a year — is so important. Some will experience severe flu-like symptoms at HIV's onset (2-4 weeks into the infection), but others will experience no symptoms at all. This is very dangerous, as the second stage of HIV — clinical latency — is generally asymptomatic, meaning it can be all too easy for patients go from feeling fine to suddenly discovering they are sick with AIDS, the final stage of HIV. AIDS goes on to make patients very susceptible to other illnesses, which is why it is so deadly.

Many are afraid of finding out whether they might have contracted HIV, but it is more dangerous not to find out. Early detection of the disease is paramount. The only way to know for sure, one way or the other, is to get tested.

Getting Tested for HIV 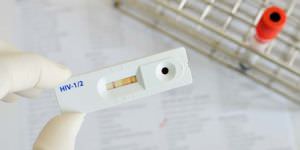 Blood tests and oral swabs are quick, easy, and inexpensive ways to test for HIV/AIDS.

An HIV test can be done with an oral swab or with a blood sample; in rare cases, a test is performed on a urine sample.

Those in the U.S. can use AIDS.gov's service locator to find nearby clinics and care centers that will provide HIV testing. Furthermore, the FDA has approved one type of at-home rapid HIV testing kit, which can be bought from many pharmacies or from Amazon. 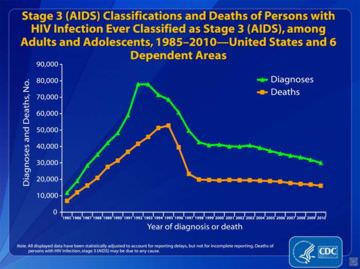 Click to enlarge. HIV transmission by category. Screenshot from a CDC presentation.

Treatment for HIV varies slightly depending on the stage of the disease. When HIV is detected in its early stages, either the acute infection stage or the clinical latency stage, it is possible for a person who is HIV-positive to live for many decades.

Antiretrovirals are the primary form of HIV treatment. They do not cure patients of the disease, which remains in the body for life, but rather hold the virus at bay by slowing its progress. There are many different kinds of antiretroviral drugs that work in slightly different ways, but all with the same purpose: slowing the disease's progression. Sometimes multiple antiretrovirals are prescribed in what is known as combination therapy.

While alternative healing therapies, like acupuncture, abound, but there is no solid evidence to suggest they offer a cure or work as well as antiretrovirals. This does not mean they cannot provide other therapeutic relief, only that they should not be used as a substitute for conventional medicine.

There is no known, consistent cure or reversal for HIV/AIDS. However, there are some notable cases of "functional cures." Functional cures are cases where the virus is not removed from the body but is essentially made dormant in such a way that it no longer affects quality of life in any way.

Some examples of functional cures do exist:

Outside of functional cure examples, there are also people who appear to be immune to HIV infection. It is possible that studying these individuals will lead to a cure or other functional cures.

Many myths persist about HIV, how it is spread, and how it might be treated.

For the dispelling of more common myths, see this page on WomensHealth.gov.

How Common Is HIV?

HIV is a global disease that affects all demographics, both directly and indirectly. Over 35 million people, the majority (70%) of whom are in Sub-Saharan Africa, live with the virus today. HIV is deadliest in impoverished nations where access to care is difficult or impossible. In 2012, over 1.5 million died from AIDS; most were children in Africa. Since the pandemic began, AIDS-related illnesses have taken the lives of 36 million people.

Click to enlarge. The prevalence of HIV across the world, as of 2009. 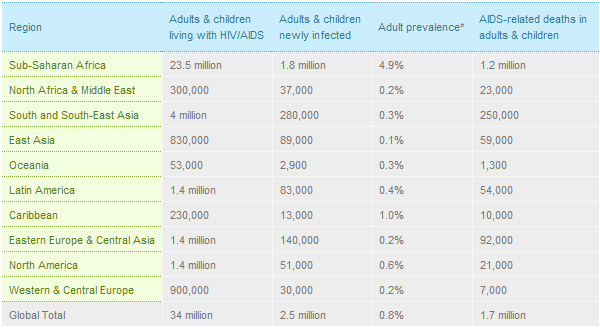 The first reported case of HIV/AIDS was in 1981. To learn about the history of HIV/AIDS, see this timeline.

Many celebrities, politicians, and artists have lived with HIV. See Wikipedia for an expansive list of notable HIV-positive people.