Plant and animal cells are both eukaryotic cells, so they have several features in common, such as the presence of a cell membrane, and cell organelles, like the nucleus, mitochondria and endoplasmic reticulum.

Plants are autotrophs; they produce energy from sunlight through the process of photosynthesis, for which they use cell organelles called chloroplasts. Animal cells do not have chloroplasts. In animal cells, energy is produced from food (glucose) via the process of cellular respiration. Cellular respiration occurs in mitochondria on animal cells, which are structurally somewhat analogous to chloroplasts, and also perform the function of producing energy. However, plant cells also contain mitochondria.

All animal cells have centrioles whereas only some lower plant forms have centrioles in their cells (e.g. the male gametes of charophytes, bryophytes, seedless vascular plants, cycads, and ginkgo).

A lysosome is a membrane-bound spherical vesicle which contains hydrolytic enzymes that can break down many kinds of biomolecules. It is involved in cell processes,like secretion, plasma membrane repair, cell signaling, and energy metabolism. Animal cells have clearly defined lysosomes. The presence of lysosomes in plant cells in under debate. A few studies have reported presence of animal lysosomes in plant vacuoles therefore suggesting plant vacuoles fulfilling the role of the animal lysosomal system.

Pictures of plant and animal cells 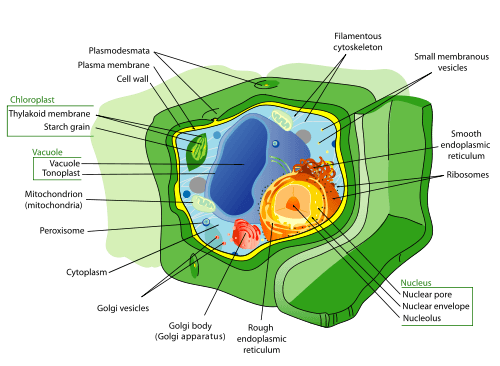 Structure of a Typical Plant Cell (click to enlarge) 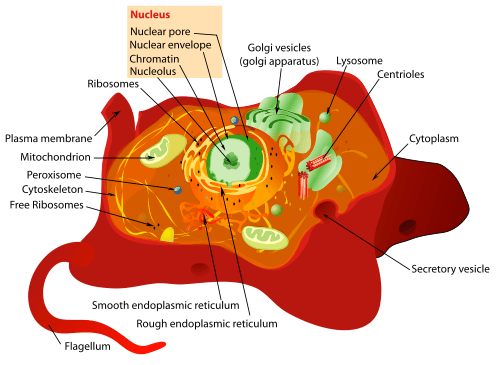 Structure of a Typical Animal Cell (click to enlarge)

This video summarizes the differences between animal and plant cells:

For a more in-depth look at the differences between plant and animal cell organelles, see this video.

This is a picture of the various types of plant cells, including xylem, phloem, sclerenchyma and collenchyma.

thank you so much buddy!!!! this will be very helpful in my assignment... thanks a lot God Bless

helped me a lot seriously!!!!!

Essay complete! Thanks so much!

helped me TONS with my science review(: thanks!

thank you so much! u made my biology project MUCH easier! :D