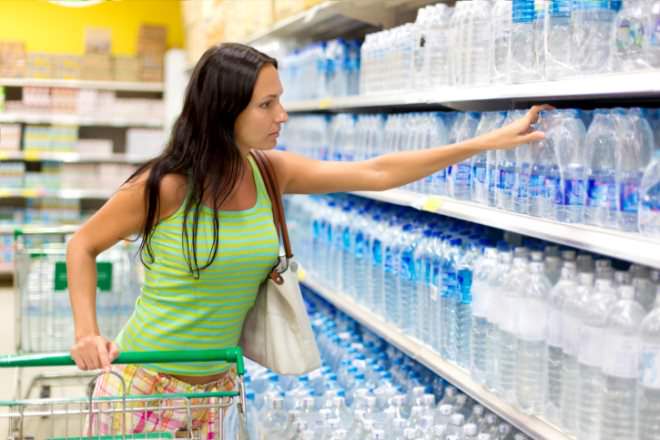 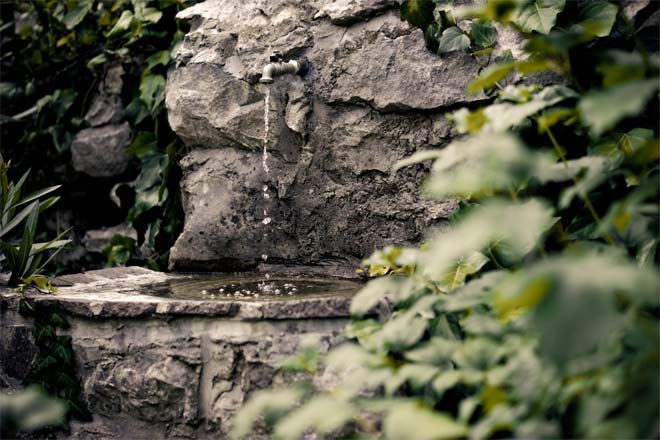 While bottled water has a “healthy,” “pure” image, it is less regulated than tap water and significantly more expensive. Tap water is stored in reservoirs and carried into homes and offices through pipes; it is managed by local municipalities. Bottled water is packaged in plastic bottles and sold in stores. It includes water used in water coolers.

Tap water, which can be hard or soft, goes through many stages of processing. First, all dirt and other particles are removed through coagulation. Alum and other chemicals are added to attract the dirt particles, which then sink to the bottom. The water then passed through filters and layers of sand, gravel and charcoal to remove even smaller particles. A small amount of chlorine is added to kill any bacteria or micro-organisms and placed in a closed tank or reservoir. It is then carried to homes through pipes.

Water bottles are made from virgin petroleum, a fossil fuel, and fossil fuels are burned in order to fill and distribute the bottles. Some bottles need to be shipped internationally. According to Food and Water Watch, the plastic in these bottles needs up to 47 million gallons of oil per year to produce. According to the Container Recycling Institute, less than 20% of bottles are recycled, and bottled water produces up to 1.5 million tons of plastic waste each year.

Costs vary depending on the state and brand, but bottled water can cost 1000 times more than tap water. Most municipal water costs less than 1 cent per gallon, while a bottle of water typically costs over $1 for 20 ounces.

The Environmental Protection Agency regulates tap water, while the FDA regulates bottled water. However, FDA regulations do not cover water that is packaged and sold within the same state, and so 60 to 70% of bottled water, including water-cooler water, is fairly unregulated.

Bottled water has to meet less strict regulations than tap water. This means that it can contain bacterial or chemical contaminants, including carcinogens, that exceed industry standards. A study by the NRDC found in 1999 that two brands were contaminated with phthalates, one exceeded EPA standards for tap water.

Scientists have also suggested that plastic bottles may leak plastic into water when stored in hot or warm temperatures.

Tap water must be inspected daily, and contains trace amounts of chlorine to kill bacteria.

Microplastics were found in 93% of bottled water tested in a global study conducted by the non-profit Orb Media in 2018.

The complete official report of the study is here. In their article about the study's findings, Orb Media compared the results of the 2018 bottled water study to their 2017 study of plastics in tap water and tried to answer the question of which is safer:

Results from the study for specific brands of bottled water can be found here.

Flint, Michigan and Other Areas in the U.S.

In late 2015, the Flint water crisis came to light. It was revealed that water piped into homes in Flint had significantly elevated levels of lead. In early 2016, as more journalists explored the story, it was revealed that Flint is by no means the only city suffering from the problem of lead poisoning. The New York Times reported that elevated levels of lead were found in children in New York, Pennsylvania, Detroit and Iowa. The Guardian went even further, blaming systematic corruption and reported that

Water authorities across the US are systematically distorting water tests to downplay the amount of lead in samples.

So while tap water is supposed to be regulated and safe, it is always possible —though unlikely— that your local water authority has been downplaying the levels of lead in the water supply. Another consideration is the piping in the house itself. While the water mains may have uncontaminated water, tap water could still be contaminated with toxins from plumbing in the house. It is not a bad idea to use a water test kit ($25 on Amazon) if you can afford it and if you have doubts about the quality of tap water in your house.

In 2006, Americans drank 8 billion gallons of bottled water. Another study in 2010 suggested that people spend between $50 and $100 billion on bottled water each year.

Much of bottled water's popularity comes from the perception that it tastes better. However, in blind taste tests, people cannot tell bottled water from tap water and, in some cases, prefer water from the tap. For a small scale experiment on this, see this video.

In March 2016, the Associated Press released results from a poll that found

No need to worry in Iceland. Only stupid people buy bottled water here ;)

i just know that about 6 years ago (2007?) the tap water started to taste soooo bad that I was forced to get a brita! I would gag first thing in the morning because of the chlorine...why?

Tap water is gross. It is filled with many different pollutants and chemicals including fluoride. Seriously go to Home Depot and grab a test kit and have your water tested they do it for free. I agree with the user about paying too much for a bottle of water and also with the gentleman's statement about the plastic bottles and the environment. There are alternatives to paying high prices for clean water as well as plastic alternatives. I myself stick with distilled water. It tastes great to me and it's much better for mens urinary tract health.