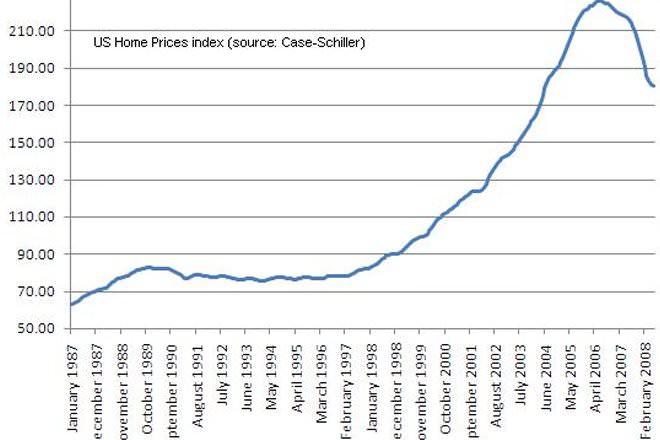 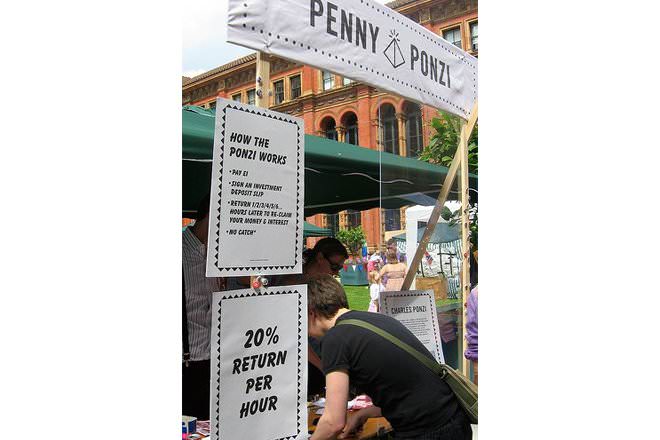 An economic bubble is a situation in which people trade in products or assets for amounts significantly larger than their intrinsic values. There is no fraud. On the other hand, a Ponzi scheme is a fradulent investment scheme that promises to offer investors incredibly high, and often risk-free returns. These returns are seldom actually paid out. Instead, the managers of the scheme convince investors to stay invested. If investors do want to take money out, they are paid using money from other investors. There is no actual investment made so there is really no return generated for the investors. 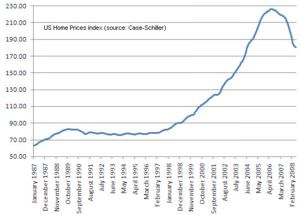 Case-Shiller Index showing the Bubble in the US Housing market in the previous decade.

The first known “bubble” occurred in the Netherlands in the early 1600s, when the cost of tulip bulbs rose to more than 10 times the annual income of a skilled craftsman. The term “bubble” was first used in the 1710s to refer to the British South Sea Bubble: the South Sea Company was given a monopoly over trade in Spain’s South American colonies, and speculation in the company’s stock led to the financial ruin of many investors.

The Ponzi scheme is named after Charles Ponzi, who used the technique in 1920. Although the Ponzi scheme existed for many years before this (and is referenced in the Dicken’s novel Little Dorrit), Ponzi’s scheme took in so much money that it became famous throughout the United States. He promised clients 50% profit within 45 days, or 100% profit within 90 days, by buying discounted postal reply coupons in other countries and redeeming them in the US. At its peak, Ponzi made $420,000 ($4.59 million in modern terms), and when it collapsed, his investors lost about $20 million ($225 million in modern terms).

Economists are unsure why bubble occur, but some suggest it may be because of price coordination and emerging social norms, where people lose sight of the intrinsic value and take the inflated value as default. Markets and people are described as getting "carried away" and overvaluing certain commodities or asset classes. Social proof (or "herd mentality") is often the reason many investors pay high prices for assets during a bubble.

Bubbles always end up bursting but how or when bubbles burst is also unclear. When a bubble is inflating (prices are rising), there is always a set of investors who recognize that it's a bubble. However, it is difficult for them to profit from this insight because it's hard to predict when the bubble will burst.

A Ponzi scheme usually entices new investors by offering returns other investments cannot guarantee, such as abnormally high or unusually consistent returns. For the scheme to keep going and pay out the returns that are promised, an ever-increasing flow of money from new investors is required.

One reason that the scheme initially works so well is that early investors, those who actually got paid the large returns, commonly reinvest their money in the scheme (it does, after all, pay out much better than any alternative investment). Thus, those running the scheme do not actually have to pay out very much (net); they simply have to send statements to investors showing them how much they earned by keeping the money, maintaining the deception that the scheme is a fund with high returns. When an investor wants to withdraw, promoters try to dissuade them by offering them higher returns for different, longer-term investments. When that fails, withdrawals are processed promptly so investors believe that the fund/scheme is solvent.

Ponzi schemes inevitably collapse, either when the promoter flees with all the investors’ money, when investments slow and the promoter is unable to pay out to investors, or when market forces drive investors to withdraw funds from the scheme. 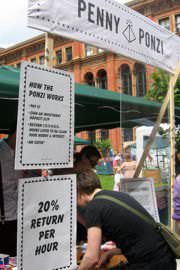 A self-proclaimed Ponzi scheme in action

Bubbles are difficult to prevent, as it is difficult to observe intrinsic values in real-life markets, and so they are usually only identified in retrospect. Even if a bubble is identified, attempts to “prick” them are dangerous, as it can cause a financial crisis.

As Ponzi schemes grow, they usually attract the attention of the authorities and are shut down before they can collapse. Christopher T Marquet's Report on Ponzi scheme reveals that the average rate of return was 282% and many perpetrators claimed “guaranteed” or “risk free” returns, while one of the most successful hedge funds in the world, SAC Capital Advisors, boasted annualized returns of 27 percent from 1996 through 2009.

Modern examples of economic bubbles include the US housing market, the cost of higher education, and the Dot-com bubble.

There are many modern examples of Ponzi schemes, including ones run recently by Bernie Madoff, Scott W. Rothstein, Allen Stanford and James Nicholson, among others.