Fraudulent pyramid schemes — like Ponzi schemes — are illegal but often try to disguise themselves as MLM (multi-level marketing) programs. Traditional MLM programs are legal because there is a real product that is being sold through the channel.

Definition of MLM and Pyramid schemes

Multi-level Marketing (MLM) is a marketing strategy designed to promote their product by through distributors, offering multiple levels of compensation.

Pyramid schemes are, however, fraudulent schemes, disguising as an MLM strategy. The difference between a pyramid scheme and a lawful MLM program is that there is no real product that is sold in a pyramid scheme, and commissions are based only on the number of new individuals one introduces into the scheme.

The main idea behind the MLM strategy is to promote maximum number of distributors for the product and exponentially increase the sales force. The promoters get commission on the sale of the product as well as compensation for sales their recruits make Thus, the compensation plan in multi-level marketing is structured such that commission is paid to individuals at multiple levels when a single sale is made and commission depends on the total volume of sales generated.

In the case of pyramid schemes, money is charged simply for enrolling other people into the scheme and no real product is actually sold. Only a few people (those who are involved in starting the scheme) make money, and when no new individuals can be recruited, the scheme fails and most of the promoters, except the top ones lose their money.

The Federal trade Commission (FTC) has set guidelines that help consumers discern legitimate plans from illegal ones. The difference between MLM and pyramid schemes under these guidelines are as follows: 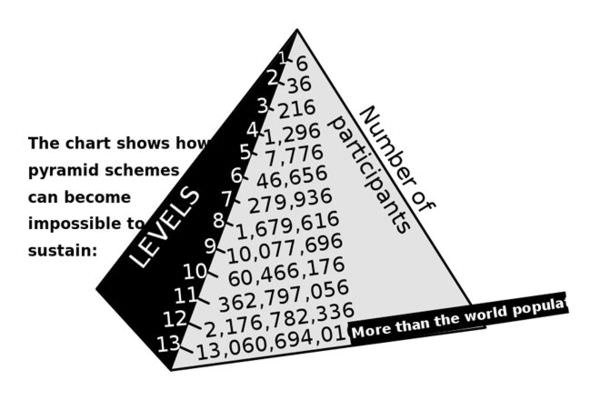 Pyramid schemes quickly become unsustainable because there aren't enough people in the world to support it.

Regardless of legal status, it is very important to note that a lot of people have lost money participating in MLM companies. Even for MLM companies that are legal, the bulk of the profits (if any) come not from selling products but from recruiting other members. This was covered well in this segment of HBO's Last Week Tonight:

Before joining a multi-level marketing company, you should try and meet former members/distributors and learn from their stories. The Internet is full of these stories and there are also support groups where people meet to warn other potential members.

MLM strategy has different compensation plans which differ slightly based on how the commission is distributed among promoters. The plans include Unilevel, Stairstep Breakaway, Matrix, Binary and Hybrid plans.

The Unilevel model is the simplest one. The design is such that a person can recruit unlimited “frontline” distributors for the product. The frontline distributors are encouraged to recruit more distributors, and thus the cycle continues. Commissions are paid up to seven levels deep.

The Stairstep Breakaway model is designed to encourage individuals as well as group sales. In this model, a group leader is assigned with multiple recruits under them. The goal is to achieve as set of volume of sales in a set time. Once that it achieved, the distributors move to a higher commission level. This pattern continues up to a certain limit, after which the distributor breaks away and this pattern of commission ceases. From this point onwards, other commissions and incentives are provided to the representative.

Matrix models are similar to the first type, except that a limited number of distributors can be sponsored at any level, and once that preset number is reached, another matrix can be started.

Hybrid models, as the name suggests, combine any of the above mentioned compensation plans.

The models include in the Pyramid Scheme include 8-ball model and Matrix scheme. In The 8-ball model each person has to recruit two people into the scheme. These people have to pay a sum to enter the scheme called a “gift sum”. The captain or the person at the top receives the gift money from 8 people before exiting the scheme. The remaining people move up the scheme, and this pattern continues as more people are recruited into the scheme.

Matrix scheme is also a pyramid scheme except that people are required to pay for a product in advance and wait in a queue in order to enter the scheme. When the recruited person further recruits a certain number of people, he or she receives a product like a camcorder or television that is worth much less than the money paid, and exits the scheme. This scheme collapses when no more people are willing to pay and join.

One of the recent examples of a pyramid scheme is Malaysian SwissCash. Examples of MLM companies include Amway, Mary Kay, Max International, Herbalife, Kyani, Le-vel, Nu Skin and Jusuru.