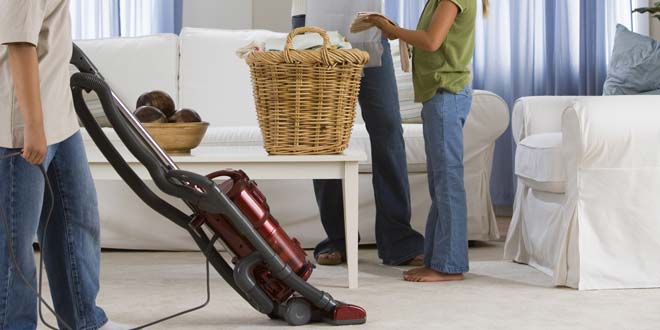 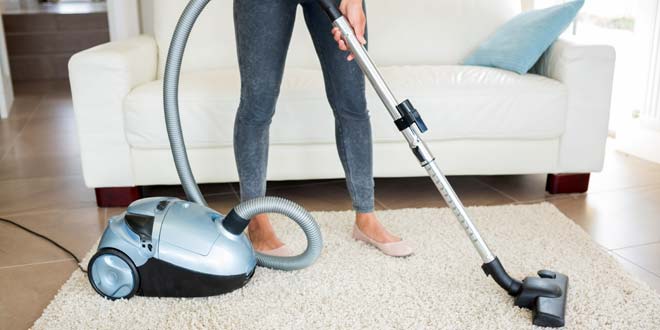 An upright vacuum cleaner tends to clean carpets more thoroughly and is easier to store, but a canister vacuum cleaner is quieter and may feel more portable, allowing for easier and more frequent cleaning of hard-to-reach places. Both types of vacuums are similarly priced, with low-end (~$50) and high-end (~$1,000+) models available.

A canister vacuum consists of a wheeled body that is attached to a vacuum wand and power head via a flexible plastic hose. The canister portion of the vacuum contains the main motor, filter, and any dust bags; depending on the model, the power head may also contain a smaller motor. Canister vacuums usually feel lighter to use, as a user only needs to move the wand and power head during cleaning. Additionally, the wheels on the canister body make it easy to drag the vacuum around a room.

In an upright vacuum, the motor, filter, any dust bags, and the power head are all part of one unit, which users push in front of themselves during cleaning. This all-in-one design means that uprights often feel much heavier, but with their weight tends to come additional power that deep cleans carpets. There is one downside to the greater power, however: uprights are also generally much noisier than canister vacuums. Even so, quieter designs are around if one looks for them.

Depending on the model of vacuum, a number of other features may be available on either an upright or a canister vacuum. Some other common design features include suction control, cleaner height adjustment (allowing one to clean bare floors differently from the higher shag of carpet), power head lighting for greater visibility in dark corners and under furniture, and retractable cords.

Many vacuum cleaner manufacturers list amperage (input power) in their marketing to imply that the higher the input, the more powerful the vacuum. However, according to EnergyStar.gov, "there is minimal correlation between power and cleaning performance." Suction power, the efficiency or inefficiency of the vacuum's parts (whether they fit closely enough together so as not to disturb suction), and cleaning head design are more important.

According to a 2014 Consumer Reports review, the all-in-one design of upright vacuums performed better during tests, sucking up more dirt and pet dander. Additionally, high-end uprights tended to be worth their expense, outperforming cheaper models.

A 2012 Australian study found that some vacuums, particularly older models, may do more harm than good, releasing dust, allergens, and bacteria back into the air.[1] The researchers also found high-efficiency particulate air (HEPA) filters to be less effective than generally marketed; this was also noted in the 2014 Consumer Reports testing. However, HEPA filters were better than regular, non-HEPA filters, meaning it is still worth the (small) extra expense to buy a vacuum with a HEPA filter.

If maximum cleanliness is of concern due to health conditions, such as asthma and/or allergies, a bagless vacuum may not be the best option, even though bagless vacuums are the most common type of vacuum available in the U.S. While replacing vacuum bags is an inconvenient, ongoing expense, cleaning the dust container of a bagless machine can be messy and re-release allergens.

In general, upright vacuums weigh more than canister vacuums. According to Consumer Reports, high-end upright models can weigh as much as 20 lbs (9 kg). The power head, wand, hose, and canister of canister vacuums can actually weigh just as much, but a canister vacuum's design often makes it feel less burdensome and makes cleaning tight areas, such as corners and under furniture, relatively easy. Those with back pain may find uprights particularly difficult to maneuver, as they require a forward-and-back, pushing/pulling motion to operate.

Even so, pulling a canister unit can be awkward and may take more (human) energy and coordination. There's a possibility that a piece of furniture can be the victim of a pull on the canister, leaving a dent or a nick. Also, the use of a canister vacuum on a bare floor versus a carpet requires manually changing the unit’s head. On uprights, switching floor "modes" is often as simple as pushing a button on the handle.

Uprights are relatively compact compared to canister vacuums, which are bulky and oddly shaped. Those in apartments or other tight living quarters will likely prefer uprights for this reason.

If noise levels are a concern, a canister vacuum is usually much quieter. While some quieter models exist, uprights are sometimes noisy enough to warrant hearing protection.

Accessories for Carpets and Rugs

Typical canister units are equipped with a number of tools, such as a crevice nozzle, upholstery brush, and at times the mechanized brush, as found with upright units, to improve work with carpets and rugs.

Upright models have motorized brushes and can be more efficient at cleaning thicker carpets and even rugs. Further, using an upright vacuum makes transitions from bare floors or carpets much smoother when controlling the unit with a foot.

If a home does not have carpeting, a canister vacuum may be a better option, especially if it is a unit with straight suction as opposed to one with a revolving brush head. The motorized revolving brush design is better for cleaning carpets and area rugs.

Some of the best selling brands in vacuum cleaners are Hoover, Bissell, Oreck, Dyson and Dirt Devil. Most of these brands specialize in uprights but also offer a small and growing selection of canister vacuums.

Canister vacuums are not as popular as uprights in the U.S. Chart from 2011 EnergyStar report.