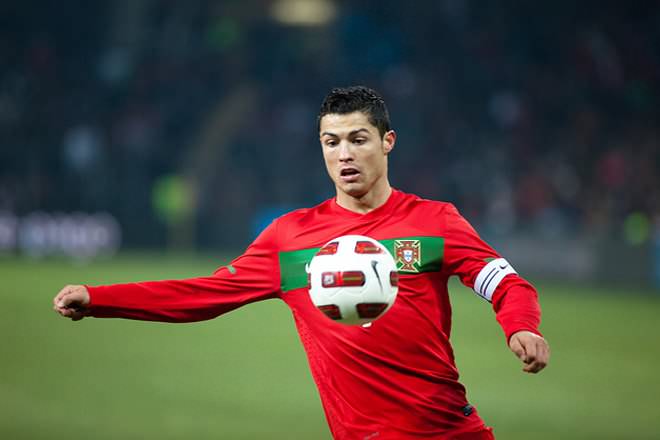 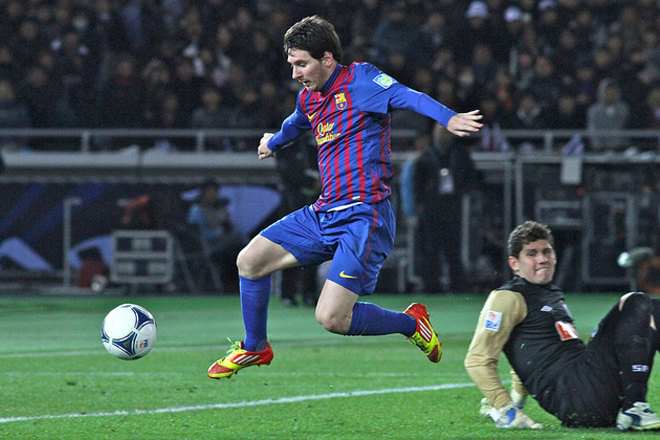 Cristiano Ronaldo, a Portuguese footballer and striker for Real Madrid, and Lionel Messi, an Argentinean forward for Barcelona are two of the greatest footballers (soccer players) of our time. Ronaldo is the older of the two, has played in more games and scored more goals than Messi. 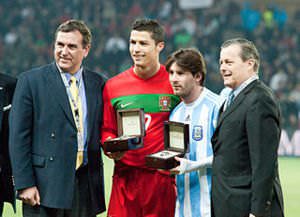 Ronaldo was born in Funchal, Madeira, in Portugal, on February 5th 1985. He began playing football at age 8, when he joined amateur youth team Andorinha. In 1995, he signed with the local club Nacional, and was then signed by Sporting CP.

Messi was born in Rosario, Argentina, on June 24th 1987. He started playing football at age 5, when he joined a local club coached by his father. He moved to Newell’s Old Boys in 1995, but at age 11, he was diagnosed with a growth hormone deficiency. The sporting director of FC Barcelona, Carles Rexach, became aware of his talent and gave him a trial with the team, offering to pay his medical bills if he moved to Spain. He moved to Barcelona with his father and enrolled in the club’s youth academy.

Ronaldo becgan his adult career with Sporting CP in 2002. He was signed by Manchester United in 2003, after which he won the FA Cup. He is the captain of the national Portugal team and has played in the team since 2003. In 2009, he transferred to Real Madrid, his current team.

Ronaldo is a fast striker who scores with his head and both feet.

Messi has a lower center of gravity than most players, allowing him to change direction quickly and evade tackles. He uses short bursts of acceleration on the field and is predominantly a left-footed player. He plays a free attack and a playmaking role, and is known for his finishing, his pace, dribbling, vision and passing ability.

In his first team, Sporting CP, Ronaldo scored 3 goals. He scored 84 goals during his 6 years at Manchester United, and has scored 112 goals for Real Madrid. He has scored 35 goals for the national Portuguese team. 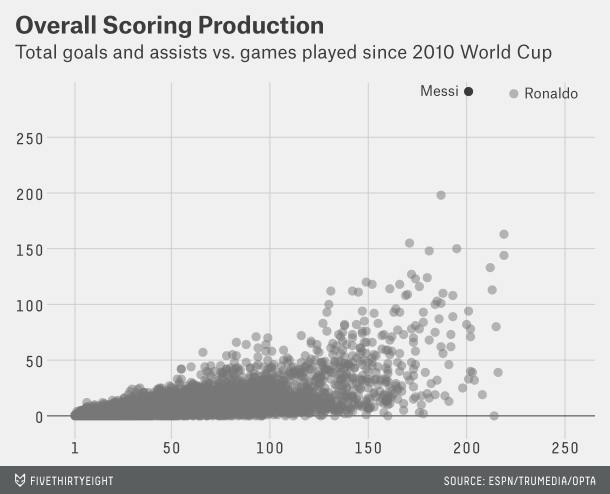 While both Messi and Ronaldo are known for scoring goals, they also frequently assist their teammates. However, Messi has more assists than Ronaldo. 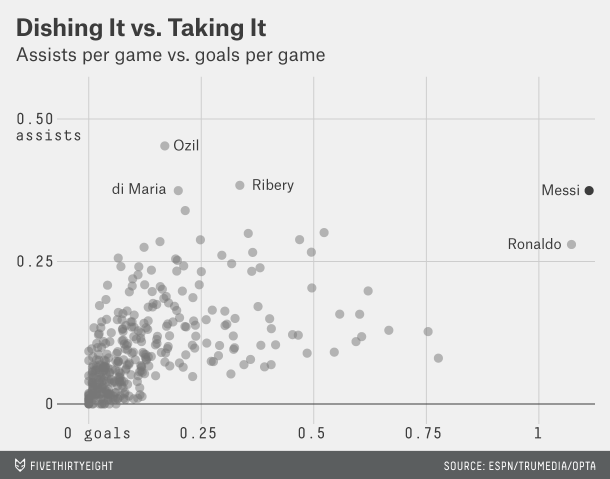 Many goals Messi and Ronaldo have scored are the stuff of legend. Nevertheless they have had their fair share of misses. This is a compilation of some of them:

Messi and Ronaldo have done exceedingly well playing for Barcelona and Real Madrid respectively. But their record for their national teams has been mixed. Messi is the highest scorer for Argentina with 55 goals in 113 matches, which also makes him the highest-capped player for Argentina. However, success has eluded Messi and the Argentine national team when it comes to victories in the World Cup or the Copa America. In fact, after a penalty shoot-out loss to Chile in the 2016 Copa America in which Messi missed a penalty shot, he announced that he would end his international career playing for Argentina.

Cristiano Ronaldo is likewise the top goalscorer and highest capped player for Portugal, with 60 goals in 130 games. But Portugal has failed to win any world cups or UEFA European Football championships with Ronaldo on the team.

Ronaldo sparked controversy by comparing his contract with Manchester United to slavery.

Messi was accused of racism by Royston Drenthe in 2012. Drenthe claims that Messi called him “negro” during play.

Ronaldo became a father on 3rd July 2010 and his son, Cristiano, is in his custody. Since the start of 2010, he has been dating the Russian model Irina Shayk. He visited Indonesia to raise money for reconstruction after the 2004 earthquake and tsunami, and he has also donated money to hospitals and to fund treatment for a young boy in Madeira. He

Messi is dating Antonella Roccuzzo. She is expecting their first child in September 2012. Messi established the Leo Messi Foundation in 2007 to support access to education and health care for vulnerable children. He is a goodwill ambassador for UNICEF.

“I don't consider myself as the best player in the world. I'm not obsessed with individual titles. I'm much more interested in being part of a team which wins trophies.” – Cristiano Ronaldo.

“Something deep in my character allows me to take the hits and get on with trying to win.” – Lionel Messi.

"I have nothing but praise for the boy. He is easily the best player in the world. He is better than Kaka and better than Messi. He is streets ahead of them all. His contribution as a goal threat is unbelievable. His stats are incredible. Strikes at goal, attempts on goal, raids into the penalty box, headers. It is all there. Absolutely astounding." - Sir Alex Ferguson, July 2009.

"Messi is my Maradona," - said Maradona himself, as the head coach of the Argentine national team.

Ronaldo needs 10 moves to pass one player... While Messi needs 1 move to pass 10 players.. Who is the best now?? It is none other than the angel of football.. Leonel Messi we all love you..

messi is the best player of all over the world.

People's think dat c. Ronaldo is the best but the reality is MESSI the best

messi is obviousley the best he has better finishing and skill. messi all the way.

Messi is the best

l xo luv the wonder argentine kid. . . both r comparable and each has his way against the other. But in a real sence. . .messi is better by a step ahead. . .he moulds and makes history. That's what matters. Not the skills on the pitch but by what u have set as a player 4 others to break. That makes u far more than the rest. . ,character also speaks in futball and the Argentine wonder kid has it all. . . wen there s any dispute bw players on d pitch. Just watch him, he walks off. That's another advantage. He doesnt show off, got no pride. . mehn he's more than a player

messi is far better than ronaldo, u can see true this laliga goals messi hs score in dis season whiles ronaldo was nt injd wit the 31 gs whiles messi has score 28 gs after being back frm injry.

Messi is the best

.messi he is the best coz he managed to get ahatrick against real madrid 4-3 he is well fitted, he does not fall down everywhere on the pitch he does not get cards everywhere!!!! Thinck of it if u hv live brain!!!!!

CR7 IS THE BEST. MESSI WAS SLIGHTLY ABOVE CR7 2 YEARS AGO BUT NOW CR7. MESSI SKILLS ARE BORING AND HE IS NOT COMPLETE PLAYER.CR7 WILL WIN 2014 BALLON D OR .

ilov u leo messi!!!!!! He is the best 4ever let us congratulate him without jelousy