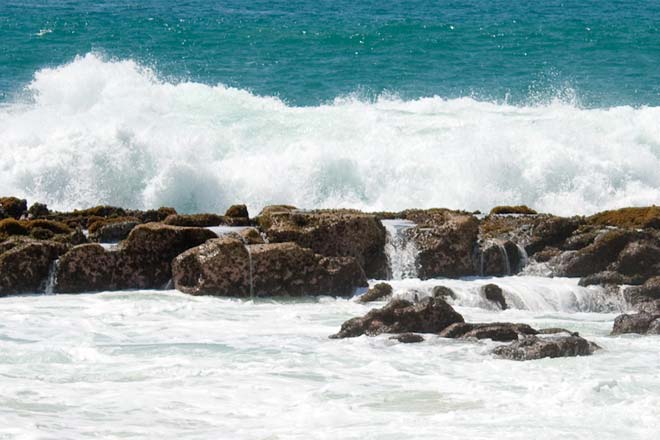 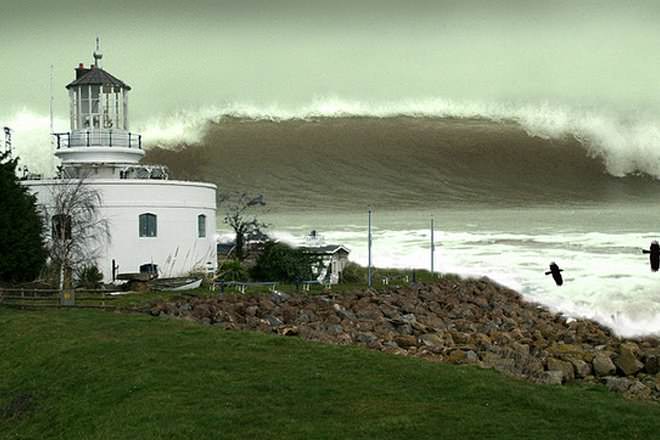 Tidal waves are waves created by the gravitational forces of the sun or moon, and cause changes in the level of water bodies. Tsunami is also a series of water waves that are caused because of the displacement of large bodies of water, but due to seismic disturbances.

Tidal waves are ocean waves that occur periodically and depend on the relative position of the Earth and the Moon. This is the reason why the arrival of the tide differs each day. The height of the tidal wave is determined by the gravitational force exerted by the moon; hence it is highest during new and full phases of the moon and lowest during the quarter phases of the moon. The costal areas experience two high and two low tides daily.

Tsunamis were erroneously referred to as tidal waves in the past, but they are not related to tide formation and can occur in any tidal state. In Japanese, tsunami translates to "harbor wave" as this phenomenon is seen more commonly seen in the coastal areas. In early geographic texts, tsunami was also referred to as seismic sea waves.

Tidal waves are caused due to both the sun and the moon, but due to the close distance between the earth and moon, the effect moon has on tidal waves is much greater than the sun.

Tsunamis can be generated by earthquakes, erupting submarine volcanoes or due to any gas bubble erupting in the sea or ocean. These causes have the potential of creating tsunamis provided it occurs just below the body of water, is of moderate amplitude or displaces a large volume of water.

The intensity of a changing tide is noticeable only in certain parts where it’s high enough (the Bay of Fundy in Canada where it reached as high as 55 feet). Strong tides have the potential to cause damage to the houses on the beach and can result in flooding.

Tsunamis can have wavelengths of up to 200 kilometres and can travel over 800 kilometres per hour. When tsunamis approach shallow water near land masses, the speed decreases, and the amplitude increases very rapidly. The scale used to measure tsunamis is Sieberg-Ambraseys scale and the Imamura-Iida scale used for tsunamis in the Mediterranean sea and Pacific ocean, respectively. The magnitude of tsunamis is measured by the ML (Murty and Loomis).

Tsunamis can cause extensive damage. These powerful waves can destroy entire villages, and drown anything that comes in its way. An effective way to prevent damage is to plant sturdy trees along the shoreline which are able to withstand the force of these waves.

Tidal waves are phenomenon seen at most coastal areas. A majority of tsunamis (80%) occur in the Pacific Ocean but can occur in any large body of water if the underlying causes are present.

Tidal waves occur on a daily basis in most coastal area, whereas tsunamis occur as when there is seismic disturbance in large water bodies. Although tsunamis cannot be accurately predicted, there are some warning signs that can be used to save lives.

You have got it completely wrong! A tidal wave is NOT a wave caused by the gravitational effect of the sun and the moon like the regular ocean tides, it is a wave that comes in in an onrushing flood like the tide. A tidal wave very closely resembles a flash flood when it reaches land. As it approaches, it may form a distinct wave front like a typical oceanic gravity wave or tidal bore but when it reaches land it is like a hugely speeded up and exaggerated tide. It is a hydrologic term. Tsunamis are tidal waves caused by earthquakes shifting ocean bottom, technically seismic sea waves. But other phenomena can causde tidal waves but they should not be called tsunamis though they typically look just like them. There are two other types of ocean waves, gravity waves powered by the weight of the sea water which are the classic ocean waves, and ripples which are vibrations in surface tension. I am not sure how tidal bores are defined. They seem to combine the charcteristics of tidal waves and gravity waves but since they probably deserve their own separate designation. They do not really look like typical tidal waves. Check out the videos of the Indian Ocean tsunami and the one on Japan and notice the strong resemblance to a tide. Tidal wave is a very appropriate designation of the phenomenon.