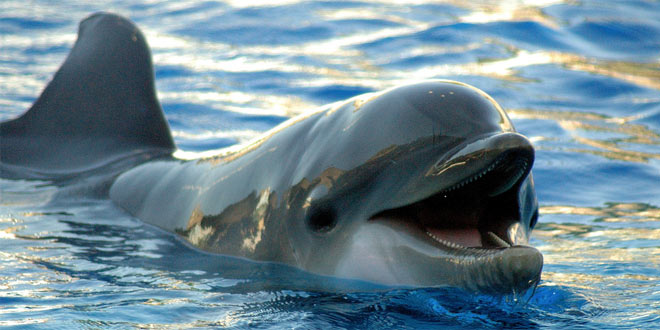 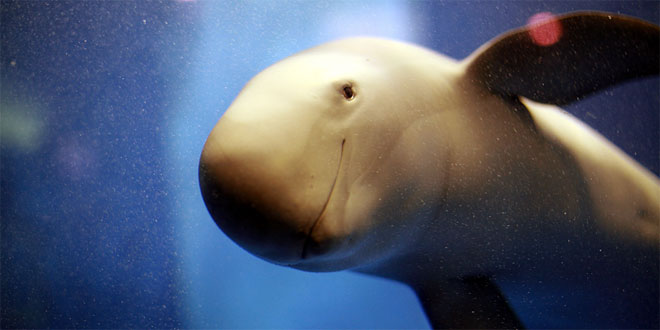 Dolphins and porpoises are cetaceans — marine mammals — that are closely related to whales. Dolphins belong to the Delphinidae family and are up to 30 feet long. Porpoises, belonging to the Phocoenidae family, are smaller and stouter, with other anatomical differences. Though both animals are very intelligent, dolphins are deemed to be more social and live in larger, more stable groups.

Although "dolphin" and "porpoise" are often used interchangeably, the term porpoise should refer only to the Phocoenidae family, in which there are seven porpoise species. 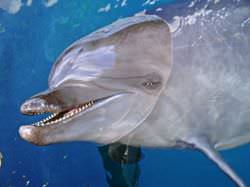 Close up of a dolphin's head

The primary differences between dolphins and porpoises are anatomical. Externally, one can tell the difference between the two animals by looking at the head and dorsal fins. Dolphins usually have a “beak” that makes them appear "long-nosed," while porpoises do not have a beak and thus appear more "flat-faced." The dorsal fins on dolphins are usually curved or hooked, while those on porpoises are more triangular in shape. Up close, one can distinguish the two by their teeth: dolphins have cone-shaped teeth, but porpoises have flat or spade-shaped teeth.

Dolphins and porpoises vary in size, with dolphins generally being the larger of the two animals. The orca, or killer "whale," which is actually a dolphin, genetically, can be up to 35 feet long, for example, and the Hector's dolphin of New Zealand is sometimes smaller than 4 feet. On average, porpoises, which are more darkly-colored than dolphins, are between 5 and 8 feet long. Both species breathe air from blowholes at the top of their head. And, like almost all mammals, they give live birth to their young and nurse their offspring. Dolphins and porpoises even have hair, but nearly all of it is lost shortly after birth.

Of the three types of fins found on dolphins and porpoises, only the pectoral fins (flippers), which are used for stopping and steering underwater, contain bones. These fins actually contain the same number of bones as a human arm and end in five digits that are structured similarly to fingers. Scientists theorize that these bones come from dolphins' and porpoises' land-dwelling ancestors some 50 million years ago. 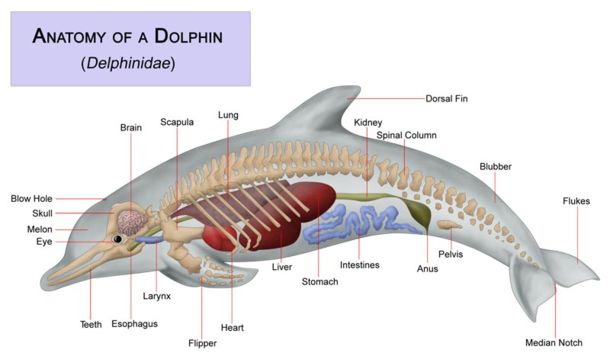 The flippers on dolphins and porpoises contain finger-like digits. Click to enlarge.

Beyond the pectoral fins, the dorsal, or back, fin provides stability as the dolphin and porpoise move quickly through water (up to 25 mph). This dorsal fin, along with the tail flukes, is made of collagen, a fibrous connective tissue similar to cartilage.

Echolocation Use and Other Senses

Both dolphins and porpoises use echolocation for navigating underwater, finding food, avoiding predators, and communicating with other members of their species. The small external ear opening is about two inches behind the eye in both animals. Neither dolphins nor porpoises rely much on their sense of smell. Vocalizations are more extensive and frequent with dolphins, and can travel longer distances than those recorded for porpoises.

Males of both species have two genital openings on their ventral side, while females have four: two for their sex organs and two for lactation, with teats found inside the body. Mating seasons for both species tend to be short, with dominant males having multiple mates. Pair bonding is more frequently observed in dolphins, often for life. Gestation periods are very similar, between 7 and 12 months, with 1-2 calves born, though most often only one. Calves are weaned after about a year.

Social Behavior of Dolphins and Porpoises

Dolphins tend to live in pods, or groups, of up to a dozen individuals. Where food is abundant, "superpods" exceeding 1,000 dolphins have been observed. Dolphins coordinate hunts and communicate for other reasons by combining whistles, clicks, and ultrasonic sounds.

Porpoises are relatively shy and are seen alone or in groups containing a few individuals. They are rarely in large pods. Their grouping behavior does not result in stable associations, but ephemeral relationships that change as individuals join or leave. Porpoises can act in a coordinated fashion even when they are hundreds of feet apart, using echolocation for finding prey and staying together in a pod, but do not use it to communicate as often as dolphins do.

Dolphins and porpoises are highly intelligent. They have large, complex brains and are self-aware like humans. They are among the few species in the world that can identify themselves in a mirror. Years of research have allowed scientists to make an extensive case for protecting cetaceans (including porpoises, dolphins, and whales) from fishing and unrestricted hunts.[1] This and potential extinction are reasons for international bans on whale hunting and the prohibition of net-based tuna fishing that can trap and drown dolphins.

Bottlenose dolphins have been observed and recorded calling out the specific names of loved ones when they become separated. Other than humans, dolphins are the only known species to explicitly call each other by name. Dolphins have also been observed staying with injured or ill individuals, and have been known to help humans adrift at sea. Because they are more gregarious, dolphins have become popular animals for training in captivity, a situation porpoises do not adapt to well.

All of those statements really do make them sound like they have the same frailties as Humans. I'm glad I'm not judged based upon what other humans do. Rape, murder. My goodness what if I were lumped together with a politician. On a lighter note. I was diving the anchor in the BVI when 3 dolphins entertained my crew my shadowing me. Each time I dove to reach the anchor they dove next to me. My crew watched while I was unaware. When I surfaced so did they. I must have amused them. Perhaps they thought I inadequate in my lack of depth or time or perhaps both.

Porpoises, divided into six species, live in ALL oceans, and mostly near the shore.

"lesser fear of man," -which makes working with Dolphins easy and friendly. Dolphins remind me of humans except they are marine versions of ourselves.