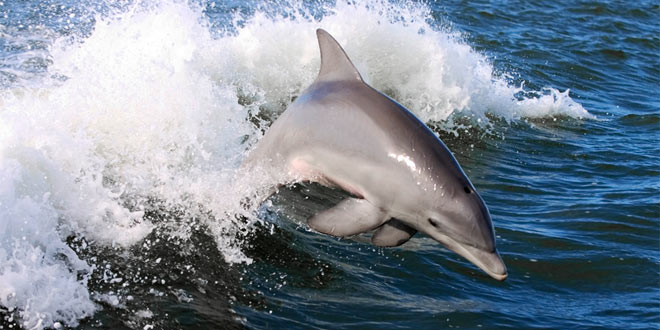 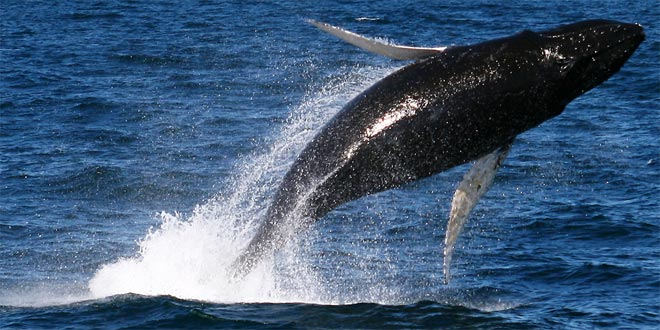 Whales and dolphins are mammals that belong to the order cetacea, which also includes porpoises. The two animals are physiologically different, with whales often being larger than dolphins and more comfortable in a wider range of water temperatures. While popular culture often celebrates the intelligence of dolphins, whales and dolphins are generally thought to be equally intelligent according to recent scientific studies.

Like all cetaceans, whales and dolphins are descendants of land-living animals that returned to fresh or salt water after living millions of years on land. According to fossils dating back about 50 million years, whales even share a common ancestor with the land-dwelling hippopotamus.

Dolphins and whales share common, mammalian traits, including warm blood, hair, and lung-based breathing. They also give birth to living offspring and nurse their young. Their bodies resemble the streamlined form of a fish. Both have fins, including the back or dorsal fins and their tail fins, known as flukes, which are highly efficient at propelling the animals through water. Many species of dolphin and whale can be identified by their dorsal fin shapes.

Whales and dolphins breathe differently from other animals. Because of their environment, these cetaceans are conscious breathers, meaning they decide when to breathe. Unlike sharks, that need to keep moving in order to breathe, dolphins and whales can remain motionless in the water, especially to sleep. However, their sleep periods are very brief, as they need to return to the surface for air.

Both whales and dolphins need to surface in order to breathe air through their blowhole. But unlike humans, they can tolerate a lot more CO2 in their system before their breathing reflex kicks in. When they are active, dolphins average 8 to 12 breaths per minute but when they are resting this rate drops to 3 to 7 breaths per minute. Because of their large lungs, they can take in a lot of air in each breath, allowing them to hold their breath longer.

Cetaceans like dolphins and whales sleep in a pattern called cat-napping. Only one half of their brain shuts down while sleeping. The other half is awake and attentive; its job is to watch for predators or obstacles, and also rise to the surface to breath when necessary. After about two hours, the sides are reversed and the rested half awakens allowing the active side to rest.

Whales tend to be between 11 and 110 feet long; dolphins are between 4 and 35 feet long. Some classification systems consider anything over 9 feet as a whale, which can lead to confusion. This is why there are six species of "whale" that are actually dolphins, genetically.

The largest animal that has ever lived on earth is the blue whale, weighing approximately as much as 24 elephants. Evolutionary history indicates that about 3 million years ago ecological conditions in oceans changed and resources increased very quickly. This allowed smaller baleen whales to take advantage of these abundant resources by growing bigger.[1]

Blowholes: One or Two?

While all dolphins have one blowhole, baleen whales — those that feed on plankton and small fish or crustaceans — have two blowholes. All toothed whales have only one blowhole.

Whales are divided into two categories, based on their teeth. One group is known as baleen whales; this is the largest suborder of whales and includes the blue whale. Baleen whales' teeth are of a fringed structure and grow from the upper jaw. These whales use the fringed structure of their teeth to filter large amounts of water and trap plankton and small creatures.

The other category for whales is toothed, which includes dolphins and sperm whales, amongst others. Toothed whales are carnivorous, meaning they feed on fish, squids, marine mammals, and even other whales.

Dolphin teeth are conical and tend to be quite sharp. They are used for grabbing and dragging prey into the mouth, where it is then swallowed whole. Most dolphins have between 58 and 94 teeth. These teeth are replaced regularly, which is a trait they share with toothed whales.

Dolphins and whales are matriarchal in their social organization, allowing males to commingle with females only during the mating season. But not all males can participate, so only the strongest, most dominant males share most of the reproductive opportunities.

The mating season for dolphins and whales varies depending on the species, but most mating occurs in warmer seasons. The mating rituals of both animals can be complex, and pair bonds, which can be same-sex or opposite-sex and last a lifetime, exist often. However, dolphins may engage in more sexual encounters, even outside of the mating season proper, than whales.

The gestation period of whales is between 9 and 17 months, with dolphins' gestation period ranging between 10 and 13 months. Nearly all whales have only one calf, and most dolphins do as well, but some dolphin species tend to birth two calves. Dolphins and whales nurse their calves for some time, usually more than a year, and this is associated with a strong bond between mother and young, providing a high probability of survival in the wild. Dolphins tend to wean their young sooner than whales do and will even chase off weaned calves.

Frigid, arctic waters support some of the largest whale species, such as the humpback and the blue whale. Baleen whales feed only in arctic waters, eating mostly krill, plankton, and other small marine animals. The humpback whales often hunt by forming a ring of bubbles around their prey which then obstructs escape. See also this video: Humpback Whale: Hunting Technique

Blue whales feed by gulping water and prey equal to about 140% of their own mass. They feed nearly continuously when prey conditions are good. A blue whale can consume up to two tons of food within a day. Their favorite food is krill, tiny fish that are found in swarms in all oceans of the world. A whale can take a large bite out of a krill swarm and ingest up to 500,000 calories in a single bite.

Whales and dolphins hunt for food with the help of echolocation, i.e., they direct clicking sounds into the water and listen to the strength of the rebounded echoes, which allows them to know how far away they are from prey. The clicks and whistles used are emitted from their blowhole(s).

Cetaceans have developed sensory enhancements for this process. The melon-like shape of a dolphin's head serves the same function as that of the large sinus cavities in whales' skulls: these adaptations create echo resonance to help pinpoint distances, speeds, and angles with greater precision. They also enhance the capacity for communication. 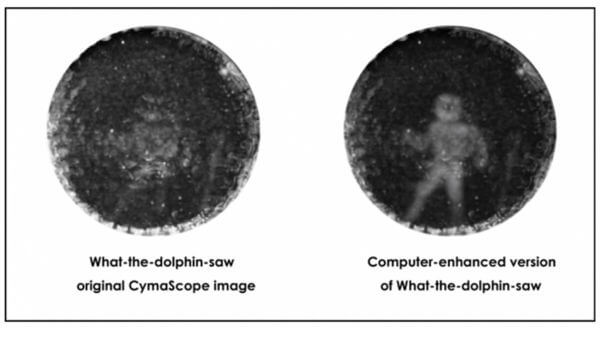 Research led by Jack Kassewitz conducted at the Dolphin Discovery Center in Puerto Aventuras in Mexico has revealed how dolphins perceive objects in their environment. This is a picture that translates a dolphin's perception of a submerged human. More details here

Researchers have also speculated that dolphins use these "sono-pictorial" representations to communicate with each other. So it could be a kind of language used by marine mammals.

Intelligence in Dolphins and Whales

Dolphins and whales are deemed to be equally intelligent. After years of research, scientists have said that cetaceans (including porpoises, dolphins, and whales) are highly intelligent and should potentially have rights similar to those afforded humans.[2]

Whales and dolphins have frequently been observed teaching, learning, cooperating, scheming, and even grieving. Some species communicate with melodic sounds, known as whale songs, while others make click-like sounds which can be very loud. Both types of underwater sounds have been recorded hundreds of miles from their source. Whale vocalizations seem to serve many purposes beyond echolocation, such as for mating and identification. Scientists studying whale and dolphin communication repertoires have estimated that

Dolphins and whales establish strong social bonds through their advanced communication abilities. They will stay with injured or ill individuals, even helping them to breathe by bringing them to the surface if needed, as can be seen in the video here.

Calling Each Other By Name

A study has shown that bottlenose dolphins even name themselves using a unique whistling sound and, when separated or otherwise stressed, call their loves ones (such as a mother or a close male friend) by their "name". Other than humans, dolphins are the only known species known to be able to do this.

Humpback whales produce a series of sounds at varying frequencies known as whale song. There is evidence that these vocalizations can be considered "songs" — i.e., music — because of their patterns. [3] Not only are these songs, but scientists have also found that the songs evolve every six months, just like fashion evolves in certain human cultures.

Where Whales and Dolphins Live

Whales have a global range, to the point that species of whale can be found in every ocean. However, the specific range for each species can be limited to one ocean or ecological region. In contrast, baleen whales engage in long migrations, from arctic latitudes to warmer tropical waters for breeding.

Dolphins exist primarily in temperate zones north and south of the equator, and only make occasional forays into colder waters, primarily for feeding. Some dolphin species live in fresh waters, or can live in both salt and fresh water, whereas no whale is known to live in fresh water and cannot tolerate it for long.

Groups of Dolphins and Whales

Whales and dolphins travel alone or in groups, called pods, on their annual migrations. Larger groups of pods are referred to as a school. Dolphin and whale pods can come together to form larger groups known as "schools." Schools can have a few hundred individuals. On occasion, even "superpods" of over 1,000 animals have been observed. These superpods tend to form temporarily in areas where food is abundant.

Most pods have between 6 and 15 individuals and stay close to shallower waters. Pods are most often composed of females, mothers and calves, adult males, and juvenile males. Adults can often be found alone or swimming in pairs.

"Whales" That Are Genetically Dolphins

Six species in the family Delphinidae are called "whales" but genetically are dolphins:

This video below shows a group of five orcas hunting a dolphin that is exhausted and separated from its pod. It was filmed off the coast of South Africa. Despite their name, orcas (killer whales) actually belong to the dolphin family.