Granite and quartz are popular choices for countertops and flooring. Granite is a very durable natural stone with a high aesthetic value. It is heat and scratch resistant but also porous and therefore possible to stain; it requires periodic maintenance. The quartz used in countertops and flooring is a man-made combination of resins and crushed quartz. The resulting surface is non-porous, meaning it is more stain resistant than granite and requires less maintenance overall. Quartz is also very heat and scratch resistant. Most granite will be more expensive than quartz.

Silestone is one popular brand of engineered quartz that is imported from Spain.

Granite surfaces come from naturally-occurring granite rock which is mined and cut into large but manageable slabs for surface construction. Quartz surfaces, however, are engineered. They almost entirely consist of natural materials, but the combining of those materials is completely manufactured.

Over 90% of quartz surfaces consist of ground up quartz minerals, while resins — the two most common being polyester and epoxy — make up about another 7% of the materials. These resins bind the crushed quartz into a single form and to any additional color pigments or fillers, such as crushed mirrors, colored glasses, metals, and even shells.

Though it is possible to purchase solid-color quartz surfaces, many choose the quartz surface designs that mimic natural stone. As such, granite and many quartz surfaces often have very similar aesthetic qualities — speckled, neutral tones — and can sometimes be difficult to tell apart from a distance. This is somewhat unsurprising, as every piece of granite naturally contains quartz minerals, meaning there is often some overlap in appearance.

Close inspection of quartz surfaces that are designed to mimic natural material reveals quartz has more uniform patterns and colors. Its man-made appearance is simply not as random as what is found in a natural stone like granite or marble, but this is improving with time and technology.

Here is a side-by-side comparison of granite and quartz countertops found in kitchens: 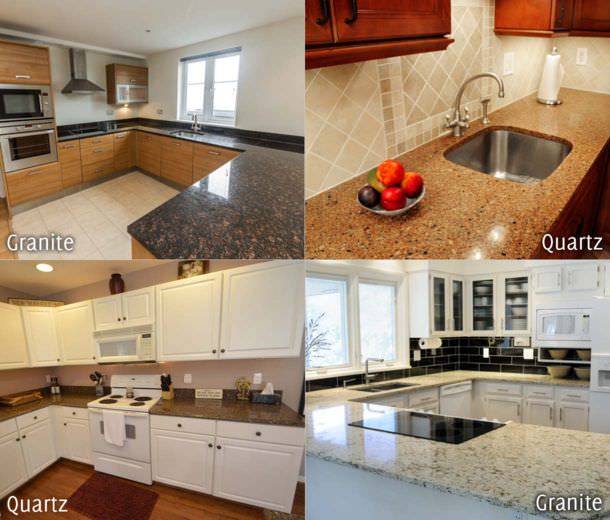 A side-by-side comparison of granite and quartz used in kitchen countertops. Click to enlarge.

Either surface is sufficiently strong for general use in kitchens or bathrooms. With proper care, granite can last a lifetime in good condition, and many quartz manufacturers offer lifetime guarantees on their surfaces. Where the two types of surface differ most is when it comes to their ability to resist damage.

While granite is a very durable rock, it is not without natural flaws that have the potential to make it weak in certain places over time. These weaknesses, though rare, can make certain parts of the stone susceptible to cracking or chipping. In contrast, such flaws are essentially engineered out of quartz surfaces, making them harder and more durable than granite. The quartz mineral itself is one of the hardest in the world — harder, even, than diamonds.[1] Even so, the man-made aspect of quartz can, on very rare occasion, also mean there are manufacturing mistakes which could cause some of the same problems for quartz that granite's natural flaws can cause it to have. Purchasing granite or quartz from a reputable seller with good guarantees is a must.

Though quartz is often touted to be more heat and scratch resistant than granite, neither surface will be easy to scratch or damage with heat during general use. Quartz, however, is much more resistant to spills and subsequent staining than granite is. Natural stone like granite is porous, meaning it absorbs liquids that are not cleaned up quickly enough; these liquids can noticeably and permanently stain the stone, especially if the spills are highly acidic. Granite is not exactly easy to stain — in fact, it is the most stain resistant of the natural stone surfaces — but quartz, as a non-porous surface, is nearly impossible to stain. To make granite more stain resistant, it is important to maintain a sealant on its surface.

Granite and quartz are good in kitchens and bathrooms, where hard surfaces are often desired. They can be used for countertops, flooring, and even backsplashes and walls. Neither surface should be used outdoors: As a slightly porous surface, granite will be vulnerable to the elements or to water in bathrooms. Depending on a quartz surface's makeup, it can fade in direct sunlight.

On a day-to-day basis, both granite and quartz are easy to maintain. Cleaning either surface is as simple as using water and dish soap with a cloth or sponge. Unlike quartz, though, granite requires additional periodic maintenance. A surface sealant plays a vital role in protecting granite from stains, and resealing is required annually or at least once every two years. Because quartz is non-porous, it does not need a sealant to protect it from stains.

When deciding between granite and quartz, it is also important to take into consideration the long-term costs of granite, which periodically requires professional resealing. Quartz has few if any expenses after its installation.

Neither surface is particularly likely to experience considerable damage, but in the event that some damage occurs, both are best repaired by professionals.

With granite only slightly porous and quartz non-porous, both surfaces are fairly hygienic countertop choices and are resistant to bacteria, mold, and mildew. However, granite's porous nature may mean it will harbor more bacteria over time than quartz will — especially in the case of Silestone, which includes an antibacterial agent in its surface. At least one study has found granite is very resistant to bacteria, but further long-term study is needed to draw any definitive conclusions. Regardless of surface type, regular disinfection is recommended.

As it is possible for granite to contain traces of naturally-occurring radioactive elements, some have voiced concerns about the natural stone and whether it emits toxic radon gas, which can cause lung cancer. There has been less public concern about quartz, even though it could have some of the same radioactive elements.

The EPA states that granite is extremely unlikely to cause harm and that radon emissions — were they to occur — would likely be minimal compared to those that may come from other naturally radioactive sources. Similar conclusions have been drawn regarding quartz safety. The Marble Institute of America maintains an archive of misinformed statements on the subject of granite safety.

Quartz is a type of silicate mineral. When it is ground up and then later cut into, as it is in the manufacturing and sizing of engineered quartz surfaces, crystalline silica dust is released into the air. While this dust is present when handling granite surfaces (because they include quartz, too), there is a much higher concentration of it when working with engineered quartz. This can be very dangerous for workers, especially if a work environment has not implemented proper safety measures.[2]

Breathing in crystalline silica dust can lead to silicosis, an occupational lung disease that is seen in some other industries, such as mining.[3] Silicosis makes one more susceptible to tuberculosis and puts one at greater risk for developing lung cancer.[4]

Granite is not an eco-friendly surface choice. A great deal of energy is required to mine, cut, deliver, and install dense, heavy granite surfaces. Granite mining leaves a permanent mark on landscapes and contributes to deforestation. Furthermore, granite is not reusable or recyclable.

Quartz is more eco-friendly than granite, but to what extent this is so varies. While quartz is one of the most abundantly available minerals on the earth, mining is still required to obtain the mineral. Also, the resins, coloring, chemicals, and fillers used alongside the crushed quartz in these engineered surfaces may or may not be environmentally friendly and, as mentioned above, the dust produced from quartz surfaces can be very dangerous for workers. Some fillers, such as glass, may be recycled, while others may have various drawbacks.

The Silestone brand is owned by the Cosentino company in Spain, which is also where Silestone surfaces are manufactured. Much of Silestone's popularity stems from the fact that it was the first engineered quartz for countertops. It has dominated the quartz market ever since and accounts for over 70% of all quartz surfaces in the U.S.[6]

Silestone is also the only antibacterial quartz surface. While other quartz surfaces are highly resistant to bacteria because they are non-porous, Silestone specifically adds an antibacterial agent — Triclosan — to its surfaces. This has potential pros and cons. On the one hand, this means Silestone surfaces can be very useful in hospitals. On the other hand, there are some concerns that Triclosan may contribute to antibiotic resistance.[7] There is no scientific consensus regarding the use of Triclosan and the growth of antibiotic resistance at this point in time. Research on this matter is ongoing.