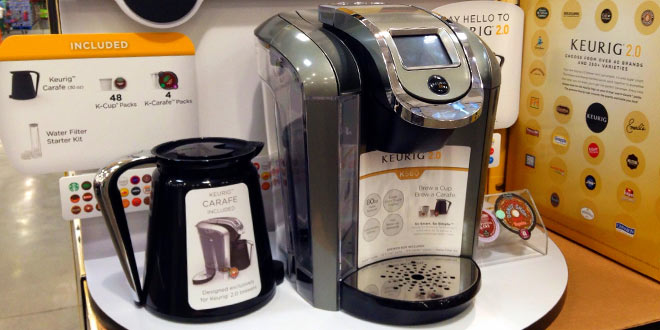 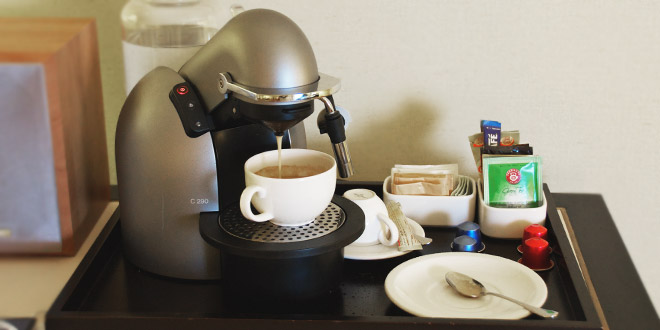 Keurig and Nespresso manufacture brewing systems that make single servings of gourmet and premium coffees. Keurig machines use coffee pods, known as K-Cups, to brew their beverages and have connections to well-known beverage brands, such as Folgers, Celestial Seasonings, and Starbucks. Nespresso uses specially-perforated foil and plastic capsules for their machines, which only brew coffee, espresso, and cappuccino, though off-brand solutions for tea and hot chocolate do exist.

Whichever machine one chooses, the user is mostly locked into that company's marketplace, as the systems use proprietary technology that each company guards zealously. For instance, Keurig's K-Cups cannot be used to replace Nespresso capsules and vice versa.

Like Tassimo, Nespresso and Keurig machines focus on single-servings (one cup) of coffee. Where they differ is in that the Keurig can also make tea, hot chocolate, and other hot drinks, while the Nespresso only brews coffee, espresso, and cappuccino (in models with milk systems). Keurigs cannot brew espresso. Off-brand solutions exist for making hot chocolate and tea in a Nespresso machine, but these are not necessarily supported by the manufacturer and may void warranties.[1]

Brewing times will vary according to the model and the drink being made, but most preparations usually take fewer than 4 minutes, from start to finish. To brew coffee, the machines combine distilled water, heated to an exact temperature for the best flavor. Keurigs use pressure-based systems, while newer Nespresso models use a centrifuge-based technology for their brewing. Some Keurig and Nespresso machines carry their brewing tasks out better than others, meaning it is important to read reviews before purchasing a machine. For example, in the video below, which compares a Keurig coffeemaker to a Nespresso Vertuoline, the Keurig brews at a hotter temperature than the Nespresso.

Nespresso developed their capsule-based brewing system in 1976, but it wasn't until 1990 that it began to catch on in European markets. The Nespresso capsule is made mainly from aluminum and uses a food-grade lacquer inside to further protect drink ingredients. The foil is slightly perforated in different patterns depending on the requirements of the particular coffee; these patterns adjust brewing times and temperatures, as needed. Keurig cups, called K-cups, are mainly made of plastic with a foil cover. A pod or capsule has only 3-4 grams for coffee (for example), enough for one cup.

The pod/capsule system keeps coffee fresh for a longer period of time, as it doesn't expose the grounds and other contents to air and humidity, as might happen with coffee in an opened bag or can.

Keurig offers over 200 kinds of drinks, including some made by the most familiar coffee and tea brands on the market. Among them are Green Mountain, Starbucks, Folgers, Twinings, Celestial Seasonings, Caribou, and Tully's.

A major difference between Keurig and Nespresso is that Nespresso does not have any deals with tea companies, so tea lovers may prefer Keurig machines for this reason alone. However, Nespresso owners have found creative workarounds to this problem.

Both companies use proprietary technology for their coffee pods and have often employed legal action to stop competitors from releasing similar, compatible, and cheaper products.

Nespresso and Keurig machines range from around $80-$100 to as much as $180-$300 for higher-end models. Nearly all models are for single servings, meaning they are best suited for homes and small businesses, where volume coffee-making is not required.

For a coffee drinker, each cup of Nespresso or Keurig brew will cost about $0.75 cents, with the more expensive grounds running as high as $2.00 per cup. Bulk buying of pods or capsules can bring this price down, but it stills cost several times more per cup than store-bought coffee brews.

The coffee machines are a negligible part of the overall cost of enjoying Nespresso or Keurig coffee and drinks. Both companies sell their machines at close to cost with the idea of locking the customer in to repeat purchases of materials. The coffee in K-cups and Nespresso capsules costs several times more than store-bought grounds, with some grounds pricing out at the equivalent of over $50 a pound.[2]

Both companies have fought hard to keep competitors from releasing compatible, off-brand pods/capsules. Nespresso's patents expired in 2012 and their parent company, Nestlé, is trying to create new patents to extend protection. Keurig has fought against several companies creating generic pods, with spotty success. Both companies have explored licensing their technologies, mainly for the coffeemakers themselves.

As with all coffee machines, periodic cleaning is needed to preserve the purity of flavors in the brewing process. Some higher-end Nespresso models have an automated cleaning system, but most models from both companies rely on "blank brew" cleaning, the practice of running water and a mild cleaner (e.g., white vinegar) once or twice through the machine. Cleaning is needed depending on usage, but in most cases, should be done every 2-3 weeks.

Most Keurig and Nespresso models are can be expected to last 2-5 years, but much depends on usage and proper maintenance. Both companies offer a limited one-year warranty on all models, but some licensed manufacturers may extend that warranty up to two years on certain models.

Pods and capsules are rated to maintain freshness for up to 18 months, provided the container itself is not altered in any way. However, the flavor and coloring of some grounds may fade much sooner due to higher amounts of volatile compounds.

Nespresso is the global market leader in unit sales of machines and single-serve units, with the bulk of its sales in Europe and Asia. Keurig is the best-selling coffee maker of its type in the U.S., but Nespresso continues to have a slight edge in sales among premium coffee drinkers (about 28-36% of the global market).[3]

Nespresso capsules are made from aluminum and can be recycled. Nespresso offers a "return the empties" plan using pre-paid boxes. Consumers can add a free recycle bag to their coffee purchases, which comes with a prepaid shipping label. According to National Geographic, Nespresso has

created a global recycling program for its capsules. In 53 countries, they can be retrieved and sent to specialized processing plants via home-collection, mail-back services and drop-off points. In the plants, they are shredded before spent grounds are used for various green initiatives... The aluminum is always compressed, melted and sent off to begin its next life.

Keurig aims to make all new K-cups recyclable by 2020. Already all their cups in Canada are recyclable. K-cups are often reused, and companies such as Ekobew create special reusable options, but this is done manually by machine owners and is not a company policy.

These efforts, however, result in only a tiny amount of recycling amid millions of pods and capsules discarded each week, and ending up as landfill waste.