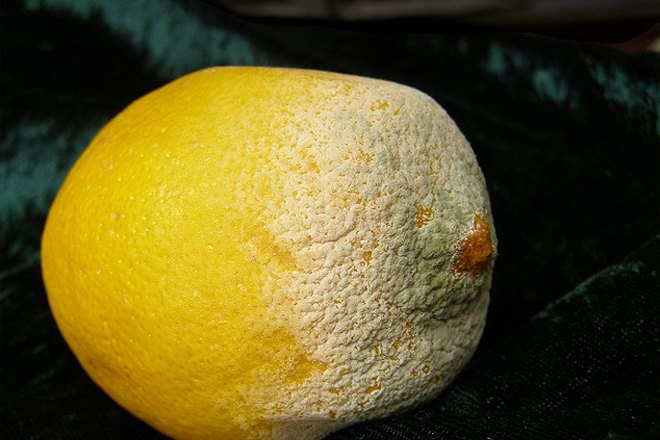 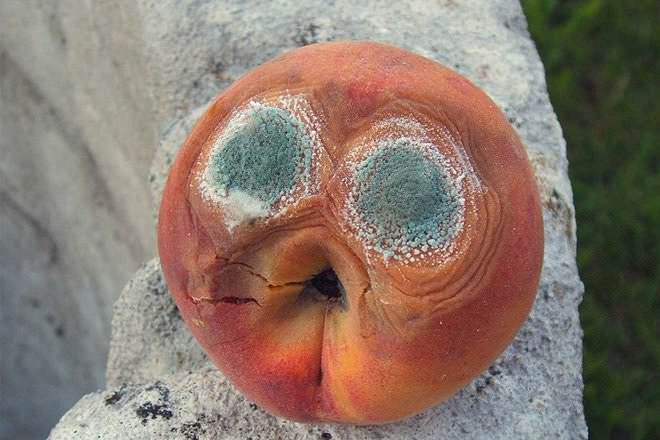 Mold and mildew are types of fungi; typically, mold is black or green, and mildew is gray or white. Mold tends to grows on food, whereas mildew is an issue on damp surfaces, like bathroom walls, basement walls, or fabrics. Mold grows in the form of multicellular filaments or hyphae, while mildew has flat growth. Mildew is often referred to as a kind of mold (or mold in its early stages), and is classified as powdery (under the order Erysiphales) and downy (under the family Peronosporaceae).

Mold has a fuzzy appearance and can be an orange, green, black, brown, pink or purple in color. Downy mildew starts as yellow spots that first become brighter in appearance and then the color changes to brown.

Powdery mildew is whitish in color and looks like talcum powder. These white spots slowly turn yellowish brown and then black. 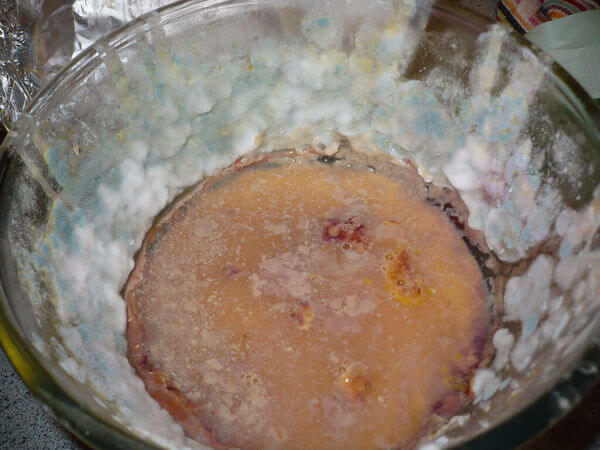 Mildew on a pancake.

Mold and mildew both produce gases that are sometimes odorless but sometimes can have a musty smell. The technical term for these gases is microbial volatile organic compounds, or MVOC. Sometimes you can detect the smell of mold even before you see it. The smell is unpleasant and dank, like wet socks or a damp forest with decaying wood.

To get rid of the smell of mildew or mold, disinfect the surface using bleach or a mixture of water and vinegar. Be careful to wear rubber gloves.

If you can smell the mold, it means spores are already in the air. Spores of fungi that produce mycotoxins are hazardous. For people who are sensitive to mold, it may lead to nasal irritation, stuffy nose, sore throat, skin or eye irritation, coughing and wheezing.

Health Effects of Mold vs Mildew

Prolonged exposure to mold spores can cause health problems such as allergic reactions and respiratory problems, due to the toxins (mycotoxins) it produces.

Mildew can cause damage to crops and other plants it infests. Inhalation of mildew can cause coughing, headache, scratchy throat and lung problems. Mildew can also start growing in lungs and cause other serious health problems.

This video explains the difference between toxic and allergenic mold (mildew).

To prevent mold and mildew in your home, you need to keep all the areas dry and moisture-free. Check the humidity levels inside the house and take measures to control it. Fix any leak in the bathroom, kitchen or other areas. Have your heating and cooling systems regularly inspected. Finish perishable food within 3-4 days.

A dehumidifier is the most common way to control excess humidity. You can purchase a specialized crawlspace dehumidifier or even a full-sized unit to control humidity throughout the whole house.

Molds obtain their energy from food and other organic matter. Enzymes secreted from the hyphae breakdown complex molecules such as starch, cellulose and lignin into simpler substances, and then absorbed by the hyphae. Reproduction may be sexual or asexual through spores. These spores are airborne and able to survive in extreme conditions. Mold has a musty smell and is only visible to the naked eye when the colonies start growing.

Mildew is found on host plants like beans, maize, potato, tomato, rice and other plants. Mildew also grows on clothing, leather, paper, shower curtains, window sills where the moisture content is high. Reproduction is both sexually and asexually, via the production of spores.

Some of the common mold genera include Acremonium, Aspergillus, and Penicillium, the latter of which includes a species (Penicillium chrysogenum) used in penicillin antibiotics. Examples of mildew include Peronospora sp, Blumeria, and Podosphaera.

not really, anything that's moist will attract these (obviously if you read this). but why is under your bed so wet? planning on making a hot-tub?

i found mildew surrounded by mold on my carpet under my bed. is this common at all?