Spain vs. Portugal in Football

Football (soccer) rivals Portugal and Spain have played against each other 35 times, with Spain winning 15 games and losing 7. Spain also has a better record in the World Cup with one championship win and the Euro Cup, which Spain has won thrice. Portugal is yet to win in either tournament. The most recent Spain v Portugal match was in the semi finals of the Euro Cup 2012, when Spain won in a penalty shootout. 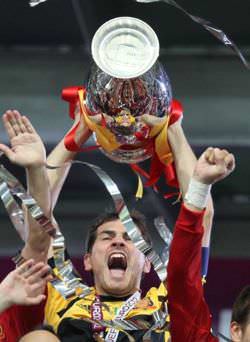 The Portuguese Football Federation was formed in 1914. Due to World War I, Portugal’s first game was not until 18th December 1921, when they were defeated 3-1. The team was invited to enter the 1928 Summer Olympics, where they lost to Egypt in the quarter final. They took part in the qualifications for the 1934 World Cup, but did not qualify.

The Royal Spanish Football Federation was founded in 1909. However, because of the first world war, the Spanish team did not play an international match until 1920, when they beat Denmark 1-0 in the Olympic Games. They first appeared in the FIFA World Cup in 1934. World War II and the Spanish Civil War then prevented the Spanish team from participating in international games until 1950.

Some of Portugal’s most well-known and successful players include Lius Figo, Gernando Couto, Cristiano Ronaldo, and Rui Costa.

Some of Spain’s most successful players include David Villa, Raul Gonzalez, Fernando Torres, and Fernando Hierro.

Portugal first faced Spain in December 1921, with Spain winning 3-1. Both teams competed in their first World Cup qualifiers in 1934, when Spain beat Portugal in Madrid 9-0, and then again in Lisbon 2-1. Portugal’s defeat in Lisbon remains their second heaviest defeat and kept the team out of the World Cup, which Spain then won. Portugal were beaten by Spain again in the 1950 World Cup qualifiers, when they lost 5-1 away before a 2-2 home draw. In more recent matches, Spain and Portugal met in the quarter finals of the 2010 World Cup, when Spain won 1-0 and went on to be World Champions. The two teams played a friendly match five months later, when Spain was defeated 4-0 – their largest defeat in almost 50 years. However, Spain made a comeback in the 2012 Euro Cup, defeating Portugal in a penalty shoot-out in the semi-finals.

Portugal and Spain have played each other 34 times since 1921. In that time, Spain has won 15 matches and lost 7 matches, with 12 draws.

Portugal and Spain met in the semifinals of the 2012 Euro Cup. After going to extra time, the score remained 0-0, and so the match went to penalties. Spain won 4-2 in penalties, with Fabregas scoring the winning penalty.