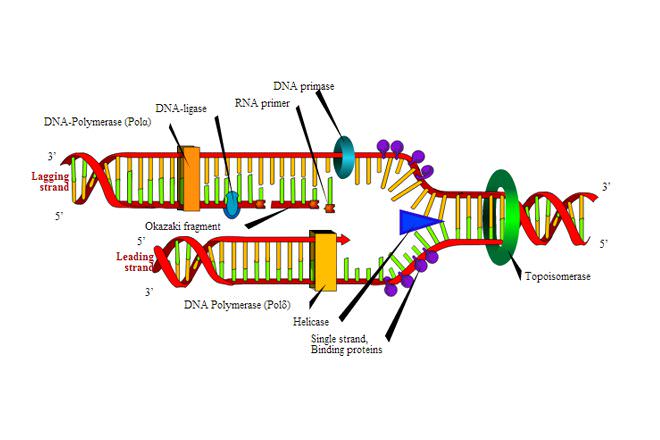 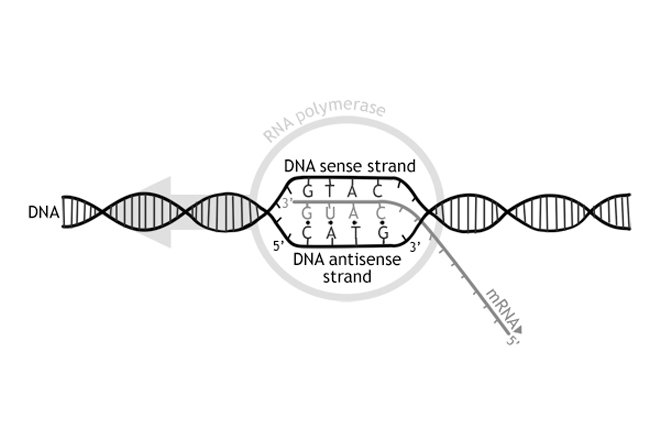 Cell division is essential for an organism to grow, but when a cell divides it must replicate the DNA in its genome so that the two daughter cells have the same genetic information as their parent. DNA provides a simple mechanism for replication. In transcription, or RNA synthesis, the codons of a gene are copied into messenger RNA by RNA polymerase.

As opposed to DNA replication, transcription results in an RNA complement that includes uracil (U) in all instances where thymine (T) would have occurred in a DNA complement.

The DNA replication and mRNA transcription process are explained in the following video. Notice that while explaining about DNA replication, it also touches on the process of mutation.

This YouTube video shows how DNA is coiled and folded for compression and also how it is replicated in an assembly line fashion by miniature biochemical machines. While that is a great video to understand the complete system and continuous process of DNA replication, the following video shows each step of the process in more detail:

The first step in DNA replication is that the DNA double helix is unwound into two single strands by an enzyme called helicase. As explained in this video, one of these strands (called the “leading strand”) is continuously replicated in the "forward" direction while the other strand (“lagging strand”) needs to be replicated in chunks in the opposite direction. Either way, the process of replicating each DNA strand involves an enzyme called primase that attaches a “primer” to the strand that marks the spot where replication should start, and another enzyme called DNA polymerase that attaches at the primer and moves along the DNA strand adding new “letters” (bases C, G, A, T) to complete the new double helix.

Coordination between the leading and lagging strands being replicated

It was believed that the replication of the leading and lagging strands is somehow coordinated because in the absence of such coordination, there would be stretches of single-stranded DNA that are vulnerable to damage and undesirable mutations.

But UC Davis researches have recently found that there is in fact no such coordination. Instead, they liken the process to driving on a highway in traffic. Traffic in two lanes may appear to go slower or faster at certain times during the journey but cars in either lane would reach the destination at about the same time in the end. Similarly, the DNA replication process is full of temporary stops, restarts, and overall variable speed.

the contents are somewhat too complicated.....however i have found helpful information