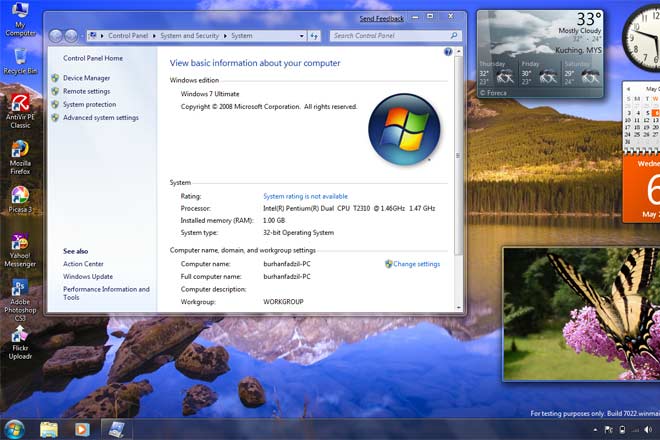 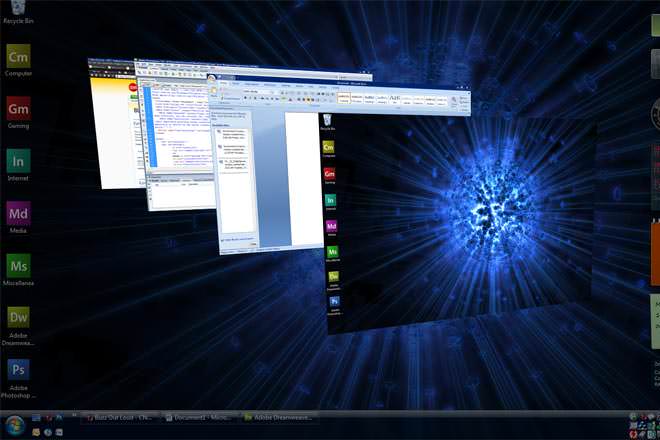 Windows 7 is the latest version of Windows. Released in 2009, Windows 7 has been universally praised for being much better than Windows Vista, which was panned by users and critics alike.

Speed and Performance of Windows 7 vs Windows Vista

Windows 7 has better speed and performance compared to Windows Vista.

Support for themes has been extended in Windows 7. In addition to setting the colors of the window chrome and desktop background, themes in Windows 7 include a sound set, and desktop slideshow settings. The default theme is titled "Windows 7", which consists of a single desktop background codenamed "Harmony" and the same sound set as Windows Vista. Six new "Aero Themes" are included.

Windows Vista introduced Gadgets and a sidebar which provides the ability to anchor Gadgets to the side of the user's desktop. In Windows 7, the sidebar has been removed, while gadgets can still be placed on the desktop. Windows 7 adds a Windows Media Center gadget to the default collection while removing the Contacts and Notes gadgets.

Unlike Windows Vista, all gadgets run in a single process, which saves memory, and the process is not run at all if the user has no gadgets on the desktop.

Windows Explorer in Windows 7 supports Libraries, which are virtual folders that aggregate content from various locations and present them in a unified view. Searching in a library automatically federates the query to the remote systems, in addition to searching on the local system, so that files on the remote systems are also searched. Unlike search folders, Libraries are backed by a physical location which allows files to be saved in the Libraries.

A variety of new keyboard shortcuts have been introduced in Windows 7 compared to Windows Vista.

The user interface for font management has been overhauled. As with Windows Vista, the collection of installed fonts is shown in a Windows Explorer window, but fonts from the same font family appear as "stacks" instead of as individual icons. The Font dialog box[13] has also been updated to show previews of the font selection in the selection lists.

There are two major new user interface components for device management in Windows 7, "Devices and Printers" and "Device Stage". Both of these are integrated with Windows Explorer, and together provide a simplified view of what devices are connected to the computer, and what capabilities they support.

Devices and Printers is a new Control Panel interface that is directly accessible from the Start menu. Unlike the Device Manager Control Panel applet, which is still present, the icons shown on the Devices and Printers screen is limited to components of the system that a non-expert user will recognize as plug-in devices. For example, an external monitor connected to the system will be displayed as a device, but the internal monitor on a laptop will not.

This new Control Panel applet also replaces the "Printers" window in Windows Vista; common printer operations such as setting the default printer, installing or removing printers, and configuring properties such as paper size are done through this control panel.

Device Stage provides a centralized location for an externally-connected multi-function device to present its functionality to the user. When a device such as a portable music player is connected to the system, the device appears as an icon on the task bar, as well as in Windows Explorer. Opening the icon presents a window that displays actions relevant to that device. Device status information such as free memory and battery life can also be shown.

In order to take advantage of the capabilities and unique performance characteristics of solid-state drives, Windows 7 will turn off Windows Disk Defragmenter, and will make use of the new SSD TRIM command to physically erase logically deleted data more aggressively.

The Enterprise and Ultimate editions of Windows 7 incorporate support for the Virtual Hard Disk (VHD) file format. VHD files can be mounted as drives, created, and booted from, in the same way as WIM files. Furthermore, an installed version of Windows 7 can be booted and run from a VHD drive, even on non-virtual hardware, thereby providing a new way to multi boot Windows.

The default disk partitioning structure in Windows 7 is to create two partitions: the first for booting, Bitlocker and running the Windows Recovery Environment and second to install the operating system.

Windows 7 has also seen improvements to the Safely Remove Hardware menu, including the ability to eject just one camera card at the same time (from a single hub) and retain the ports for future use without reboot; and removable media is now also listed under its label, rather than just its drive letter like it was in Windows Vista.

BitLocker brings encryption support to removable disks such as USB drives. Such devices can be protected by a passphrase, a recovery key, or be automatically unlocked on a computer.