Anxiety is the feeling of being nervous or anxious to the limit that it can interfere with a person’s ability to lead a normal life. Depression is severe dejection and despondency usually felt over a certain period of time and followed by feelings of inadequacy hopelessness.

Anxiety is characterized by a sense of fear, doubt and vulnerability about future events. The attention of anxious people is focused on something in the future, and fear that it will be bad. 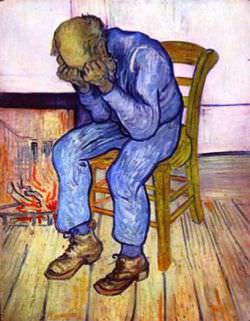 Vincent Van Gogh's famous At Eternity's Gate, said to portray his own depression at the time

Depression is not characterized by the fear and uncertainty that anxiety is. Depressed people are not as anxious about the future, as they are dejected about the present, mostly as a result of something that has occurred in the recent or remote past. They don’t expect anything different from the future and may often assume the future to be as bad as the present, or think there's anything worth preventing.

Symptoms of Anxiety vs Depression

The Web-Based Depression and Anxiety Test (WB-DAT) is a clinically accepted[1] series of questions designed to help screen for depression and anxiety disorders. It takes about 15 minutes to complete. It is recommended to show the final report of this test to your doctor.

The video below also provides a brief but insightful glimpse into anxiety and depression:

Some of the common types of anxiety are panic disorder, social anxiety disorder, obsessive compulsive disorder, generalized anxiety disorder, post-traumatic stress disorder, and specific phobias. Panic disorder is characterized by a feeling of terror or enhanced worry. Obsessive compulsive disorder causes people to indulge in obsessive behaviors like washing hands frequently, arranging desks or closets, cleaning dust, etc. Social anxiety disorder or social phobia pertains to the fear of being ridiculed or embarrassed in public. Special phobias could be fear of insects, height, water, fire or flying. Post traumatic stress disorder happens to people after they are involved in some natural disaster, accident, physical or sexual abuse. Generalized anxiety disorder is excessive and irrational worry about anything.

Anxiety can be treated with the help of psychotherapy, cognitive behavioral therapy, stress management exercises and medications.

Some of the same treatment methods like psychotherapy, cognitive-behavioral therapy and medications can also help in depression but serious depression may require ECT (electro-convulsive therapy), rTMS (repetitive transcranial magnetic stimulation) and hospitalization.

Some of the medication prescribed for anxiety and/or depressive disorders include Lorazepam, Alprazolam (Xanax), Clonazepam (Klonipin), Diazepam (Valium), Prozac and Zoloft. The medication depends on various factors like the type and severity of disorder, the patient's response to the medication, other harmful side effects, among other things.

There are some online screening tests available to help with the diagnoses of some disorders. These tests do not claim to be accurate, but are rather an aid for mental health professionals in their analyses.

According to the National Institute of Mental Health, about 18% (40 million) American adults are affected by anxiety disorders in a year; women are 60% more likely experience an anxiety than men. 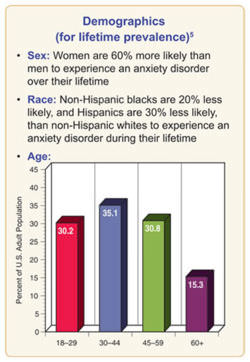 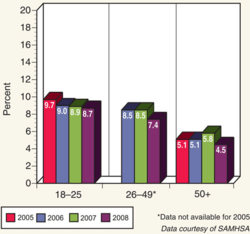 Depression among Adults by Age 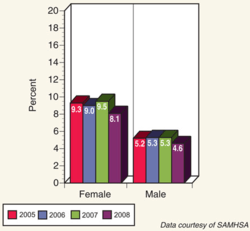 Depression among Adults by Gender