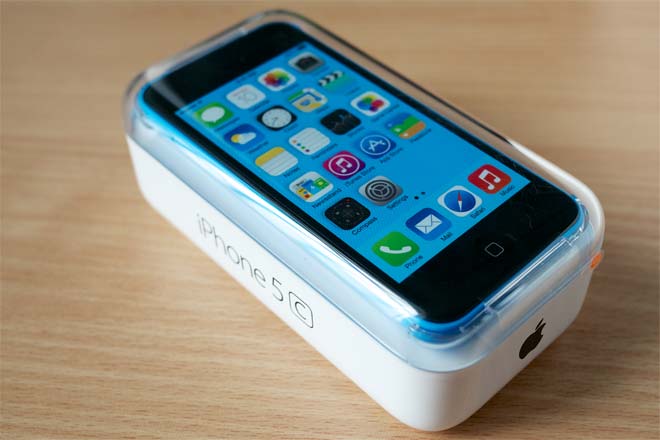 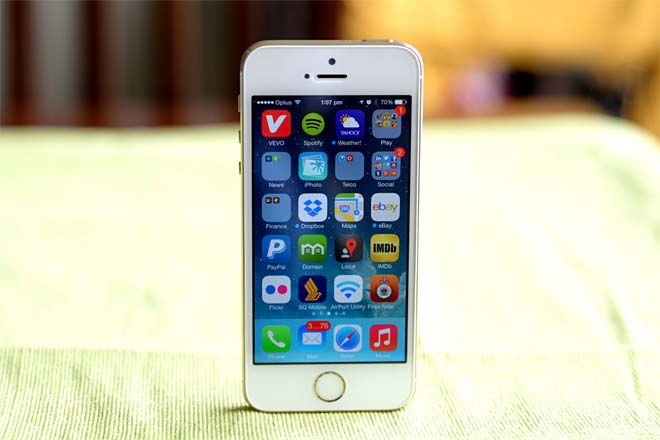 The iPhone 5s, Apple's flagship smartphone sports interesting new features like a fingerprint identity sensor, a faster 64-bit A7 chip, a better rear-facing camera, and faster 4G LTE wireless speeds. The iPhone 5c is a little cheaper and is a slightly updated version of last year's iPhone 5, with a polycarbonate shell (available in many colors) replacing the aluminum.

Both phones were officially unveiled during a media event on September 10, and became available for sale on September 20, 2013. The two models mark the first time that Apple simultaneously released two iPhones.

The iPhone 5c is essentially a slightly updated iPhone 5, made cheaper to manufacture with its polycarbonate casing instead of the traditional metal backing (it’s estimated that the 5c is about $30 cheaper per unit to manufacture than the original iPhone 5). Some critics have lamented the ‘cheaper’ look of the plastic backing, but most users agree that the phone still feels like a quality device once they hold it.

The iPhone 5s is the flagship offering from Apple. The exterior casing is the same anodized aluminum that was found in the original iPhone 5 (with the addition of the metallic ring around the modified home button). Few phones on the market can rival the build quality of the 5s. The phone is 7.6 mm thick and weighs 3.95 ounces.

The iPhone 5s is identical in height and width, but is much lighter at 3.95 ounces. 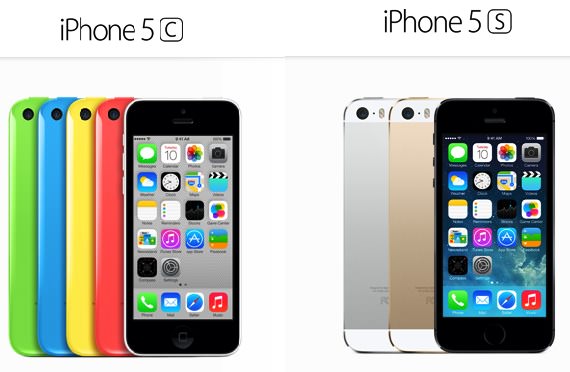 The iPhone 5c uses the same 32-bit A6 processor that was found in the original iPhone 5. In fact, the internal hardware of the 5c is nearly identical to the iPhone 5. The A6 is a 1.3 GHz dual-core processor with 1GB of operating memory (RAM).

The 5s utilizes the new A7 processor, and was the first phone with a 64-bit processor (the 5c’s A6 processor is 32-bits). Apple claims the A7 chip is twice as fast as the A6. While the A7 has similar specs of 1.3 GHz and 1GB of RAM, the processor clearly outperforms the A6 chip and rival phones in benchmarking tests.

The 5s is also the first iPhone to utilize a motion co-processor, which processes data from the physical sensors (accelerometer, digital compass, etc.) and increases the phone’s sensitivity to physical inputs.

The 1.2 megapixel front-facing Facetime camera and 8 megapixel rear-facing iSight camera on the iPhone 5c are carry-overs from the original iPhone 5. The iSight camera utilizes LED flash and shoots HD video in 1080p.

The iPhone 5c has the same 1.2 megapixel Facetime camera, but the iSight camera has been significantly upgraded. The 5s features an improved lens with a sapphire crystal cover and an increased aperture (f/2.2 from f/2.4), and an image sensor with larger pixel sizes. The camera also benefits from a new dual LED True Tone flash designed to give more life-like colors. Other upgrades to the camera include a 10-frame burst mode, and the ability to record slow motion videos at 120 frames per second.

The iPhone 5c does not have a fingerprint sensor.

The most-discussed feature of the iPhone 5s is the new Touch ID fingerprint system, which uses a sensor around the home button to recognize fingerprints. This technology is touted as a more convenient and secure way to unlock the phone and sign user accounts on iTunes and the App Store. The fingerprint data is saved in a “secure enclave” of the A7 chip, and cannot be accessed by apps or servers. Multiple finger prints can be registered on a single phone.

Apple claims identical battery performance specs on both phones, including 10 hours of talk time, 10 hours of audio playback, 40 hours of video playback, and 250 hours of standby time. The battery is not removable on these phones.

Both models run on the same iOS 7 operating system. As the phones debuted simultaneously with the new iOS 7 operating system, iOS 7 played a large role in the positive reception of the phones, and while it’s available on older models of phones (starting with the original iPhone 4), optimal performance is found on with the new models of phones. iOS 7 offers several major overhauls that were well-received: Control Center (which allows quick access to a calculator, flashlight, screen brightness, and other settings) AirDrop, and a move away from skeumorphisim. The New York Times went so far as to say that the introduction of iOS 7 was the single largest change to the iPhone series.

Both models are identical in their use of Bluetooth 4.0, high-speed LTE capability, single nano-SIM slot, and the compact Lightning adaptor that replaced the 30-pin design of pre-iPhone 5 models.

There is no built-in dual SIM option on iPhones.

The commercial reaction to the phones has been enthusiastic, as the two models sold a record-breaking 9 million units in the first three days after release (the original iPhone 5 that launched the previous year sold 5 million units in the same time span). The 5s model is by far the top seller of the two, with analysts estimating that it’s made up about two-thirds of total sales of the new models.

The iPhone 5c has garnered a more mixed response, though generally still positive. It’s recognized as a quality smart phone, but reviewers are often uncomfortable with its price point and position in the market, as it’s not the truly cheaper iPhone many were hoping for. The consensus is that it’s a quality phone that offers little to get excited about.

The iPhone 5s received mostly positive reviews from critics. TechCrunch and All Things Digital called it the best phone on the market, praising its extremely fast processor, Touch ID innovation, and overall build quality. Some critics lamented the incremental improvements from last year’s model, the New York Times saying, "maybe the age of annual mega-leaps is over."

Before the release of the phone, rumors of a cheaper, plastic-backed iPhone were common among the tech media. Many people predicted a significantly cheaper model that would make the iPhone line available to new markets of consumers, particularly in India in China. Individuals hoping for such a product were slightly disappointed by the 5c, as Apple basically discontinued the year-old iPhone 5, and offered the 5c at the same price that a year-old model would usually sell for. So although the 5c represents the cheapest new-model iPhone ever offered by Apple, it failed to open up a truly lowered price point, instead filling the spot of the discontinued original iPhone 5.

The two phones in recent news