Whereas apoptosis is a form of cell death that is generally triggered by normal, healthy processes in the body, necrosis is cell death that is triggered by external factors or disease, such as trauma or infection. Apoptosis, which can also occur as a defense mechanism during healing processes, is almost always normal and beneficial to an organism, while necrosis is always abnormal and harmful. Though necrosis is being researched as a possible form of programmed cell death (that is, a sometimes natural process), it is considered an "unprogrammed" (unnatural) cell death process at this time. As a usually healthy form of a cell's life cycle, apoptosis rarely demands any form of medical treatment, but untreated necrosis can lead to serious injury or even death.

Both apoptosis and necrosis can be seen as part of a spectrum of shared biochemical events that both result in some form of cellular death.

Apoptosis, or programmed cell death (PCD), causes cells to shrink, develop blebs (bubble-like spots) on the cell membrane, undergo degradation of genetic and protein materials in the nucleus, and have their mitochondria break down, thus releasing cytochrome. The fragments are each wrapped in their own membrane, with other chemicals (such as ATP and UTP) released freely. These chemicals lead macrophages — cell-eating bodies — to find and eliminate the dead cells and their fragments. This "eat me" message is triggered by a phospholipid normally inert in a cell's membrane, and the macrophages in turn release cytokines that inhibit inflammatory responses.

In contrast, necrotic cells swell or may form vacuoles on their surface, with interior structures either distending or shrinking rapidly, destroying the cell's processes and chemical structures. The unregulated release of cytochrome and the cell membrane's phospholipid (called phosphatidylserine) causes immediate reactions in surrounding tissues, leading to swelling (inflammation) and edema; it also often triggers other cell deaths through apoptosis. Unlike apoptosis, necrotic cells are not targeted by macrophages for cleaning of their cellular debris, so the effects of the cell rupture can spread quickly and throughout the body for long periods of time.

Apoptosis is energy-dependent, meaning it requires input from a cell for cell death to occur, leading to the term "cell suicide." Necrosis does not require any energy input from a cell, as external factors or localized infections are what trigger necrosis.

For the apoptotic pathways that cause cell suicide, the primary molecular signals are inactive proenzymes called caspases. Necrosis sometimes makes uses of caspases, but to a much lesser degree, and often the process makes no use of them, as a cell itself is destroyed in an uncontrolled fashion during necrotic events. For example, necrosis is the process behind dying, or necrotic, tissue that surrounds, say, a venomous spider bite. 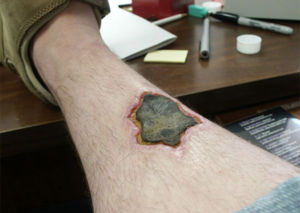 Necrosis following a bite from a brown recluse spider.

Necrosis is accompanied in its early stages by inflammation, as components (including cell structures, cytoplasm, and DNA/RNA) of the ruptured or damaged cells are released. To an organism, this unregulated flow of proteins, chemicals, and genetic material triggers emergency responses, such as inflammation to protect surrounding tissues, as well as an increase in white blood cells, macrophages, and T cell production to fight off infection. These reactions are often accompanied by a metabolic boost and fever, which can lead to fatigue and an overall weakened immune system.

If left untreated, necrotic tissues will lose vascularity, meaning they will lose blood flow, and thus start dying. When this happens, the necrosis is called gangrene, a condition where tissue ultimately dies and must be removed to stop necrosis from expanding.

When Apoptosis is Unhealthy

Apoptosis becomes abnormal only when the cellular processes that keep the body in balance either cause too many cell deaths or cause too few. Many autoimmune diseases, such as muscular dystrophy and Alzheimer's, are believed to be related to excessive apoptosis, causing muscle or nerve cells to die before their time. Cells that grow without control, meaning apoptosis is not happening often enough, usually lead to tumors, which themselves can become cancerous.

General Causes of Apoptosis and Necrosis

There are three mechanisms that cause cell death:

In general, apoptosis is part of life, the continuation of the cellular cycle initiated by mitosis. However, apoptosis can be triggered by a variety of harmful stimuli, such as heat, radiation, lack of oxygen (hypoxia), drugs and trauma, among others. In these cases, apoptosis rids the body of damaged cells or cells that can no longer perform normally and helps heal damaged areas. Higher degrees of damage from the same stimuli can lead to necrosis. For example, a mild burn can cause a small blister that heals in a week, but a third-degree burn will cause necrosis in the affected area.

Apoptosis can also be caused by hormonal and chemical changes in the body, a process most often seen in embryonic development. Both the immune and nervous systems develop with a large over-production of cells that are reduced before birth through selective processes carried out by apoptosis. For example, fetuses develop hands and feet without individual digits; once a chemical messenger is released, the webbed tissue between the fingers and toes dies off, separating each digit. A similar process occurs with sexual differentiation, as hormones guide fetal development to suppress or eliminate certain tissues and structures in favor of developing others. On the other hand, if necrosis is present during fetal development, some form of medical intervention is often required, and deformation or miscarriage may occur.

Types of Necrosis and Their Causes

In necrosis, a cell's death is usually caused by a sudden and uncontrolled rupture based on two mechanisms:

Necrosis is categorized in five ways, depending on the cause:

Apoptosis and necrosis are treated in very different ways, primarily based on the fact that one process is often normal and the other is patently abnormal.

Although much of the apoptosis process is identified, the mechanisms and activation cascade is not yet fully understood. Research into the pathways is widespread and expanding as the clinical findings have direct applications to autoimmune diseases, such as Parkinson's, Huntington's, amyotrophic lateral sclerosis, and HIV/AIDS, as well as nearly all types of cancer. Because apoptosis is a process of health and disease, the more it is understood, the better the chances are of developing more effective and better-targeted treatments. In all cases, untreated necrosis is dangerous and can lead to death.

In the case of autoimmune diseases, where apoptosis is causing too many cell deaths, treatment consists of inhibiting the caspase triggers or reducing the external triggers that may be precipitating the increased cell suicides. For cancer, the opposite is needed, so treatment to induce apoptosis in the tumor cells, making the cells more vulnerable to drugs and radiation, is a key part of most therapies. A promising new treatment involves the generic compound dichloroacetic acid (DCA), which has been shown to be highly-effective in "reigniting" apoptosis in certain cancerous tumors.

The common treatments for necrosis are:

With over 50 billion cells naturally dying in an adult human body each day, apoptosis is very common and typically benign, if not entirely beneficial. Necrosis is relatively rare by comparison, and the degree of cellular death depends greatly on whether effective treatments, such as antibiotics and anti-inflammatory drugs, are applied.