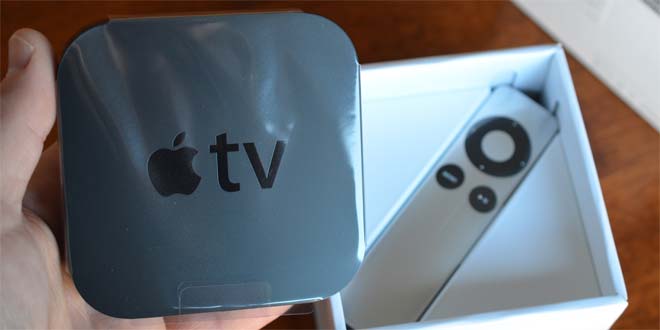 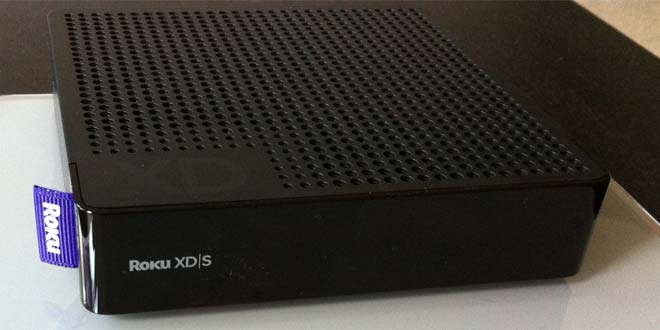 Apple TV and Roku (and, very recently, Chromecast) are the most popular streaming media players designed for streaming photo, audio, and video content — both from the Internet and from locally stored content on computers, phones, and tablets — to HDTVs.

The Roku offers more online content options, but does not have Bluetooth or an optical audio (except Roku Ultra) output like Apple TV does. Apple TV seamlessly integrates and interacts with all existing Apple devices, which is useful for Apple fans. But to anyone not deeply entrenched in the Apple ecosystem, Roku makes for a good option with its vast array of channels and third-party content options.

Apple TV offers a limited number of entertainment channels (around 30, but promising more) as compared to Roku, but most of the major online streaming services do work on Apple TV, including Netflix, Hulu Plus, and HBO Go. The only major omissions are Amazon’s streaming video service, Google's Play content, and Time Warner Cable TV, but Apple TV does work with iTunes content and YouTube. In late 2013, Apple grew its streaming library by adding channels for Bloomberg, ABC, KORTV, Crackle, PBS, Vevo, HBO GO, and Watch ESPN.[1]

Roku offers far more channels and apps, with the company claiming its device offers over 1,700 apps/channels, which is even more than most premium cable TV packages offer. Moreover, the device features a bevy of streaming services, notably Amazon Instant Video, Netflix, YouTube, M-Go, and Vudu. The major omission on the Roku is that it does not include content from iTunes. Third-party apps that support iTunes content occasionally become available on the Roku, but they are against Roku's terms of use and are quickly removed from the system; a few official iOS apps exist and offer limited functionality. For users who aren't invested in iTunes content, Roku is the clear winner when it comes to online content.

Apple TV was designed with playing local content from iTunes in mind (i.e., content already stored on the phone or computer). The hassle-free setup allows all content, including music, purchased from iTunes to be immediately available on Apple TV. All local content can also be mirrored with AirPlay, which further supports services such as Pandora and Spotify.

Although Roku can be set up to view already-purchased local content, it requires some effort. However, Roku does offer the option of playing media stored on USB drives and Micro SD cards. Mirroring abilities for local content are a hit-and-miss.

Apple TV connects to a television with an HDMI cable. Other ports include an optical audio output port, and an ethernet port for direct connection to a router. Apple TV interacts with devices via WiFi (and features dual-band Wireless-N capabilities) and Bluetooth. 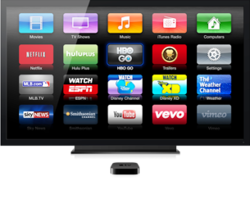 Roku also connects to television via an HDMI cable and has the same WiFi abilities, but with the added input options of a USB slot and Micro SD slot, allowing for any movies or photos stored on a USB memory stick or digital camera’s Micro SD card to be viewed. Roku does not have Bluetooth or an optical audio out.

One of Apple TV’s distinguishing features is AirPlay mirroring, which allows a user to display any content from their iPhone, iPad, or Mac computer on a television via Apple TV. For instance, a user could display an iPhone game or photo library on their television. This also enables any content pulled up online with a Mac computer or mobile device to be viewed on the television, thus greatly expanding the content possibilities of Apple TV. However, some reviewers have found that HD content viewed over AirPlay can suffer a bit in quality.

With Roku, mirroring is not built in but is possible to some degree with Miracast, a screencast (mirroring) standard for WiFi devices. However, its functionality varies among different phones and tablets, and does not work with Apple devices. Twonky, a third-party app for Roku, allows mirroring of content among some devices. In other words, some elements of Apple’s AirPlay can be mimicked on the Roku with effort and research, but Roku does not have the complete mirroring abilities as Apple TV or Chromecast.

Apple TV features an unmatched level of integration, but only within the Apple ecosystem. In addition to device interactions via AirPlay, Apple TV functions with iCloud, i.e., content that is easily shared via other Apple devices. This means any photos or videos in a user’s iCloud account can be viewed on the television without needing any device interaction. Movies or television shows purchased on the Apple TV could be viewed at any time on another device. These benefits are, of course, largely lost if a user has Android or Windows devices.

With the exception of Roku's lack of iTunes content support, Roku devices aim to be content-agnostic. They support many third-party apps and devices which feature varying degrees of integration. Photo and video collections can be viewed from a device or storage disc, and content from a phone or tablet can possibly be streamed using a third-party app. Integrating devices and viewing local content with Roku requires more research and setup than Apple TV. Though the Roku lacks the Apple TV's level of integration and easy access, it does not restrict a user to iOS devices.

Apple TV does not feature any gaming apps, but users can play any game from any Apple device on their television via AirPlay.

A number of gaming apps are available for Roku, including Angry Birds, poker, and some traditional arcade games. The motion-sensitive controller in Roku 3 can be used to play some games.

In September 2016, Roku launched an all-new lineup of devices ranging from the $30 Roku Express to the $130 Ultra. Here is a product comparison for all available Roku devices: 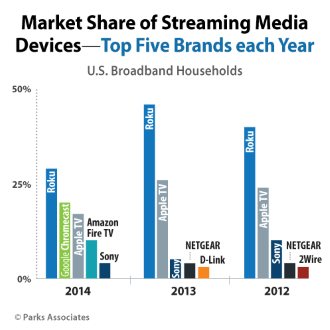 According to research firm Parks Associates, 10% of American households with a broadband connection own a streaming device. For years, Roku has been the most popular streaming media device and its lead continued in 2014. However, with the advent of significantly cheaper — albeit less capable — alternatives like Google's Chromecast and Amazon's Fire TV, Roku's market share has diminished.

Which One is for You?

For people firmly entrenched in Apple's ecosystem — for example, those with all their photos and videos in iCloud, and those with a lot of audio/video content purchased via iTunes — Apple TV offers the most seamless integration. Apple's mobile devices and computers integrate very well with Apple TV to share content, and AirPlay support can further make up for the device's limited amount of built-in channels and games. For those who already own Apple devices who are not looking for a huge array of content, Apple TV is a great option.

The Roku 3 is generally considered the best digital media player on the market, at least for consumers who aren’t fully committed to the Apple ecosystem. Roku’s primary advantage is its vast array of channels and third-party content options. The remote with a built-in headphone jack (Roku 3) is also a popular feature. Roku is the superior decide when it comes to streaming online content, and it makes much more sense for anyone who doesn’t own other Apple devices. Roku also offers iOS apps that allow users to stream local content from their iPhones and iPads to the TV.

The Apple TV and Roku 3 are both priced at around $99. Earlier versions of the Roku and the Roku streaming stick are available for $50-$70.

While these devices can be purchased from the manufacturers' websites, Amazon almost always offers lower prices. Here are the relevant links: