VGA and HDMI are interface standards used for cables that connect devices — such as laptop computers and DVD players — to a display, like a TV, computer monitor or projector.

VGA is an older standard that carries only a video signal. HDMI is the default cable standard for newer electronic devices, such as Blu-Ray players or LED TVs. HDMI can carry both digital video and audio signals, all while encrypting data with HDCP.

The video quality attained with a VGA cable is noticeably worse when compared to that of HDMI. Even so, HDMI may be phased out soon, as USB 3.1's versatile Type-C connector has the potential to replace the HDMI standard.

VGA cables were designed to carry only video signals from a device to a display. At the time they were first released (1987), analog signals were the norm. When digital signals became more common, VGA cables were enhanced with converters to enable an analog-to-digital conversion. However, newer display devices used digital signals, too, so the process became a two-step conversion from digital to analog and back to digital, with concurrent degradation of the signal. The analog signal would lose some information in the conversion to digital, and more information is lost when converted back to digital. In addition analog signals carry less information than digital, so the original image such a scenario starts out as less "sharp" than what can be achieved in digital.

The HDMI standard allows for the transfer of both digital video and audio signals via the same interface (port) and cable, capable of providing high-definition (HD) video at resolutions of 1,920 x 1,200 pixels and 8 audio channels simultaneously. Because it supports digital copy protection of all signals, HDMI cables are included for devices such as the Apple TV, Blu-Ray players, and game consoles, among other similar electronic products.

VGA cables are subject to crosstalk (signal interference from other cables) and length issues; for beyond about 4 feet, the analog video signal tends to break down. HDMI cables are less sensitive to crosstalk, but can suffer interference from electromagnetic fields. To avoid this issue in tight places with several cables, the best HDMI cables offer thick insulation. However, most standard HDMI cables offer excellent connections and solid performance without the need for premium cables at premium prices.

Input lag can refer to one of two things: the delay between a display device, such as a TV or monitor, receiving a signal and displaying it, or the delay between pressing a button in a video game and seeing the game execute the corresponding action.

VGA connections generally exhibit less input lag than HDMI connections because they don’t apply post-processing on the input. Post-processing is similar to a Photoshop filter, in that it applies effects, such as depth of field, motion blur, and color correction. While disabling post-processing reduces image quality slightly, it decreases input lag. There is an option on some TVs called “Game mode” which also disables post-processing.

Another factor in input lag is the use of adapters. Technically, every additional device introduces some delay because of the extra distance electrons have to travel, but this is negligible. Using low-quality, unofficial adapters can increase input lag significantly as well.

VGA cables are incompatible with HDMI ports, except with the use of converters. Even with converters, video signal quality is greatly compromised when using VGA cables, so they usually serve as a stop-gap measure. Audio requires a separate cable.

If HDMI cables are used with a VGA port, a converter unit and separate cable are needed to hook up the video display and provide the audio signal to a separate port.

There is only one kind of VGA connector. Often colored blue, it has both a male, 15-pinned form and a female 15-holed form. The pins/holes run across three rows, with each pin/hole performing a different function, such as providing red/green/blue (RGB) color information, power, vertical or horizontal syncing, and electrical grounding. 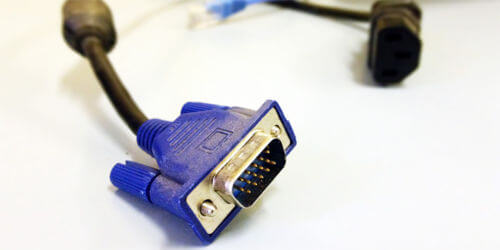 An example of a male VGA connector

There are some variations of VGA that refer to specific screen resolutions. Below is a table of the most common ones:

The main advantage of a VGA connection nowadays is that older technology, such as projectors, are almost always compatible with them; however, VGA is now mostly outclassed and outperformed by newer connections outside of specifics, such as input lag.

HDMI connections are used by most PC gamers for their faster response times (the speed at which the image on the screen updates or shifts; the longer the response times, the more motion blur is visible), presence in most modern monitors, low-cost cables, as well as their ability to carry both audio and video. However, HDMI 1.4 is limited to 4K resolution at 30 FPS, and while HDMI 2.0 supports 4K up to 60 FPS, the more recent version is not very common; furthermore, as previously stated, without “Game mode”, HDMI connections tend to have higher input lag.

Another application of HDMI connections is on Macs. While only post-2010 models of the Mac Mini, post-2012 models of the MacBook Pro, and late 2013 models of the Mac Pro come with HDMI ports for connecting to HDTVs and other displays, other models can still use a mini DisplayPort to HDMI adapter to connect via HDMI port.

VGA cables, as they have fallen out of common use, are often inexpensive and can be found online easily. Converters might cost substantially more than the cables as they are more of a specialty item.

HDMI cables are more expensive than previous DVI standard cables, reflecting the fact that HDMI offers single-cable audiovisual feeds and higher quality. Quality HDMI cable prices vary by manufacturer and length and can range from about $6 for a 6-foot cable, to about $10-$20 for a high-end 9-foot cable. Check Amazon.com for current prices and discounts.