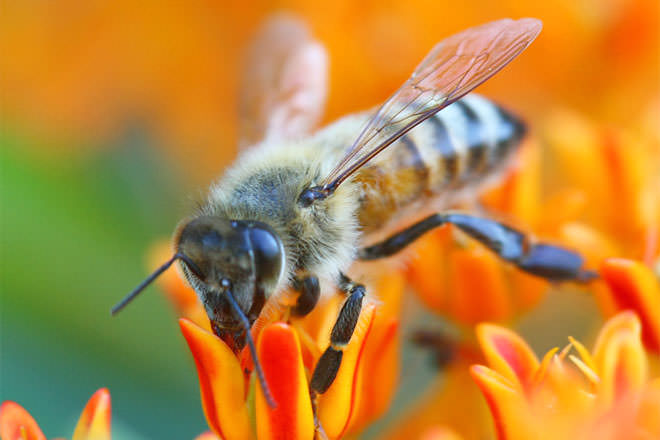 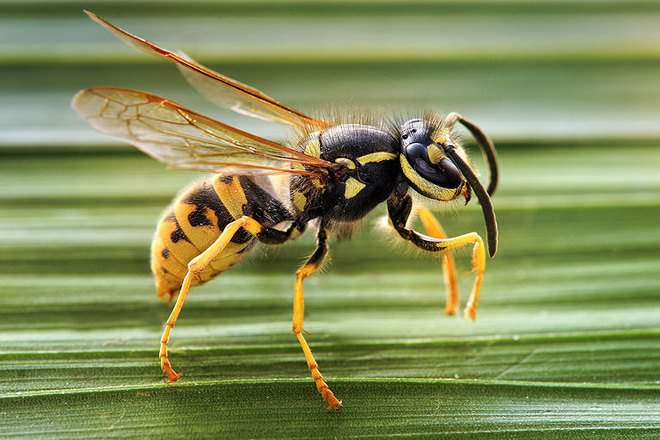 Many of us are unaware of the difference between bees and wasps and consider both of them equally harmful. However, this is not the case. Although they may look similar in color, the physical and behavioral characteristics of bees and wasps are different.

Physical characteristics of bees vs wasps

Both bees and wasps have different body and leg structure.

Bees are pollinators, which essentially means that they collect pollen and sip on nectar. They can be easily found in areas where there are flowers. Bees also drink water. They use water for cleaning their hive as well. The Queen bee eats Royal Jelly a special nectar-like substance that transforms them from a normal bee to a queen.

Wasps are usually predators who eat other insects such as caterpillars and flies. However, sometimes wasps sip on nectar too. They get attracted to the smell of human food, especially sugary beverages and beer.

Behavioral characteristics of bees vs wasps

When bees need to protect their hives or themselves, they use the poison in their stingers. They sting anyone who attempts to disturb their hives. The stinger of a honeybee is sharp and pointy. It stays in the skin after a person is stung. The stringer is ripped from the thorax of the bee and this stress eventually causes its death.

Wasps are more aggressive since they are usually predators. Unlike a bee, a wasp can easily be provoked. Sometimes it can sting you while trying to brush it away. The stinger of a wasp is smooth and easily comes out of the skin. When a wasp sees danger to it or the nest, it releases pheromones that alert its family, who will then come out and attack the person who has hurt it.

Neither wasps nor bees are generally aggressive. The only time they will aggressively try to sting you is if they are being closely handled against the skin, stepped on, or are defending their colonies or nests. There is a wide range of the intensity of a sting. For example, sweat bees have very mild stings, and males of some bee species may appear aggressive but are completely unable to sting. Honeybee stingers, while they can only sting once, can be nasty because they are barbed and remain in the skin with a venom sac attached. The ones to really watch out for are bumble bees and all wasps because they can sting multiple times, and their stingers do not detach and embed in skin.

Habitat of bees vs wasps

Highly eusocial bees live in colonies. Each colony has a single queen, many workers and, at certain stages in the colony cycle, drones. When humans provide the nest, it is called a hive. A honey bee hive can contain up to 40,000 bees at their annual peak, which occurs in the spring, but usually have fewer. The beehive's internal structure is a densely packed matrix of hexagonal cells made of beeswax, called a honeycomb. The bees use the cells to store food (honey and pollen), and to house the "brood" (eggs, larvae, and pupae).

Honey bees in the subgenus Apis use caves, rock cavities and hollow trees as natural nesting sites. Members of other subgenera have exposed aerial combs. The nests are composed of multiple honeycombs, parallel to each other, with a relatively uniform bee space. The nest usually has a single entrance. Western honey bees prefer nest cavities approximately 45 litres in volume and avoid those smaller than 10 or larger than 100 litres. Western honey bees show several preferences in nest site properties: the height above ground is usually between 1 metre (3.3 ft) and 5 metres (16 ft), entrance positions tend to face downward, south-facing entrances are favored (as described by a reference from the Northern Hemisphere), and nest sites over 300 metres (980 ft) from the parent colony are preferred. Bees usually occupy the nests for several years.

The bees often smooth the bark surrounding the hive entrance, and the cavity walls are coated with a thin layer of hardened plant resin (propolis). Honeycombs are attached to the walls along the cavity tops and sides, but small passageways are left along the comb edges. The basic nest architecture for all honey bees is similar: honey is stored in the upper part of the comb; beneath it are rows of pollen-storage cells, worker-brood cells, and drone-brood cells, in that order. The peanut-shaped queen cells are normally built at the lower edge of the comb.

This video shows examples of bee hives and wasp nests (as well as hornet nests) and explains how you can tell them apart.

Unlike honey bees, wasps have no wax producing glands. Many instead create a paper-like substance primarily from wood pulp. Wood fibers are gathered locally from weathered wood, softened by chewing and mixing with saliva. The pulp is then used to make combs with cells for brood rearing. More commonly, nests are simply burrows excavated in a substrate (usually the soil, but also plant stems), or, if constructed, they are constructed from mud.

The type of nest produced by wasps can depend on the species and location. Many social wasps produce paper pulp nests on trees, in attics, holes in the ground or other such sheltered areas with access to the outdoors. By contrast solitary wasps are generally parasitic or predatory and only the latter build nests at all.

The nests of some social wasps, such as hornets, are first constructed by the queen and reach about the size of a walnut before sterile female workers (daughters of the queen wasp) take over construction. The size of a nest is generally a good indicator of the number of female workers in the colony. Social wasp colonies often have populations exceeding several thousand female workers and at least one queen.

The nesting habits of solitary wasps are more diverse than those of social wasps. Mud daubers and pollen wasps construct mud cells in sheltered places typically on the side of walls. Potter wasps similarly build vase-like nests from mud, often with multiple cells, attached to the twigs of trees or against walls. Most other predatory wasps burrow into soil or into plant stems, and a few do not build nests at all and prefer naturally occurring cavities, such as small holes in wood.

The smallest insects in the world are wasps - some of them are even tinier than single-cell organisms like paramecium and amoeba.