The Category 6a, or Cat6a, cable is the latest iteration of Gigabit Ethernet cabling. The a stands for "augmented" and is a nod to Cat6a's improved specifications compared with its predecessor, the Category 6, or Cat6 cable.

The Cat6a doubles data transmission bandwidth, from 250 to 500 MHz; decreases the chance of crosstalk interference; and provides superior reliability and transmission speeds through greater lengths of cable. Unlike most Cat6 cables, Cat6a cables are also often shielded, making them ideal for industrial use where additional interference may be a concern.

How to Identify Cat6 and Cat6a Cables

Cat6 and Cat6a cables have their identifiers printed on the cable jacket itself — Category 6 or Category 6a, respectively. Another quick way to tell the two cables apart is to note that Cat6a cables are much thicker and bulkier than Cat6 cables. Note that both types of cables use the same connector — RJ45 — so that is not a way to differentiate between them. 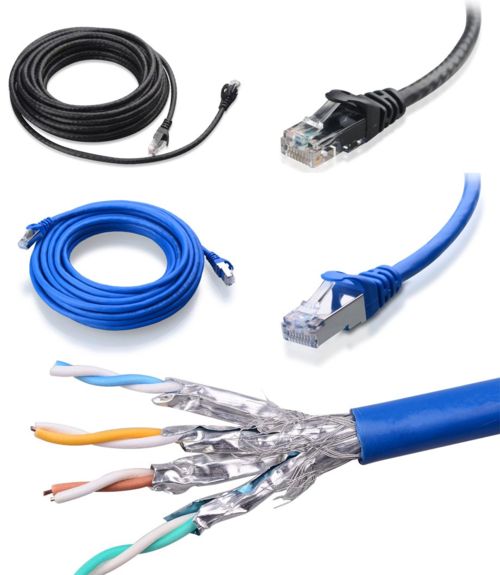 The latest network cables are made of tightly twisted pairs of copper wires — from 4-10 pairs in each cable. Through these wires, data is transmitted, but cable length and interference can get in the way of data transmission. More tightly woven wire pairs can solve both problems, or at least improve reliability, so one of the biggest differences between older and newer Ethernet cable versions usually comes down to wiring.

Cat6 cables were created under a more exacting standard than previous versions of Ethernet cables to facilitate data transmission speeds of up to 10 gigabits per second (10 Gbps). This higher standard, known as the 10GBASE-T standard, was also implemented to improve the signal-to-noise ratio (interference caused within the cable itself and the peripherals it is connected to) and crosstalk (interference caused by the presence of other nearby cables).

While Cat6a does not increase the amount of speed or data transmitted — it still transmits up to 10 Gbps — it does double the bandwidth frequency at which data is transmitted, from 250 MHz (Cat6) to 500 MHz. This allows for more reliable data transmission, even across greater distances. One of the ways the Cat6a accomplishes these feats is by further twisting the twisted wire pairs around an equally twisted and flexible plastic support.

Another similar, though relatively minor, difference between Cat6 and Cat6a comes down to insulation. Some cables have additional insulation in the form of one or more thin jackets to surround their inner twisted wire pairs. When an additional jacket is present, the cable is known as a shielded twisted pair (STP) cable; when it is absent, the cable is known as an unshielded twisted pair (UTP) cable.

While it is possible to purchase shielded Cat6 cables, unshielded versions are much more common. In contrast, nearly all Cat6a cables are shielded.

Extra shielding helps boost reliability and block out interference in areas that may suffer from heavy electromagnetic interference (EMI). The average home office or small business user will rarely need a shielded Ethernet cable. Shielding benefits industrial environments the most.

For Cat6 cables, maximum lengths depend heavily on network speeds and crosstalk conditions. For example, in lower speed networks such as 10, 100, or 1,000 megabit systems (the 10/100/1000BASE-T standards), the maximum cable length is 100 meters (330 feet), with about 90% of that length used to transmit data between systems and the remaining 10% for the connection itself. When crosstalk conditions are ideal in higher speed 10 gigabit (10GBASE-T) networks, the maximum Cat6 cable length is 55 meters (165 feet), but it is only 33 meters (110 feet) when the potential for crosstalk is high, as when several cables are bundled tightly in one area.

Cat6a cables make use of their higher standards by allowing full 10GBASE-T transmission speeds of up to 10 Gbps, at 500MHz of signal bandwidth, over 100 meters (330 feet).

To determine the level of crosstalk in either Ethernet cable, data transmission speeds need to be electrically tested after installation. 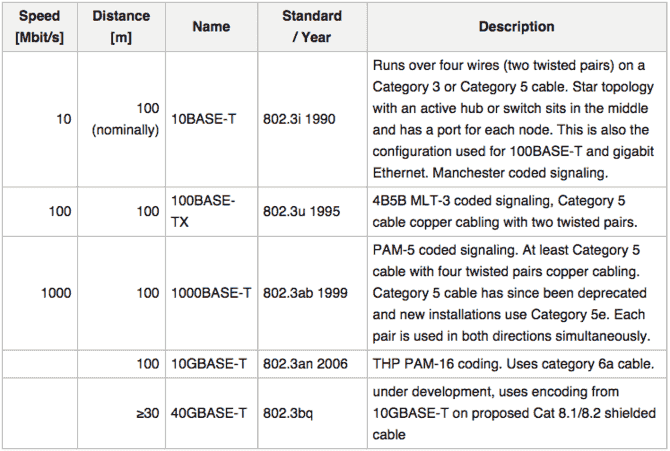 Different network speeds and distances may require newer, better cables, such as the Cat6a. Screenshot from Wikipedia.

Due to its new central column support and ubiquitous shielding, the Cat6a is much heavier and bulkier than the Cat6. Cable trays will not hold nearly as many Cat6a cables as they can Cat6 cables.

Though Ethernet cables can seem sturdy on the outside, their inner workings are fragile. In other words, it is important not to bend cables too much, as this can damage wiring and decrease performance quality. The minimum radius a cable can be bent without damaging it is called the bend radius. The lower the bend radius, the more you can bend the cable i.e., the more flexible it is. The bend radius is roughly four times the cable diameter. Because of their bulkiness, Cat6a cables take up more room and have a larger bend radius than Cat6 cables.

Is It Worth Upgrading?

It is possible to run a busy home or small office network with Cat5e cables. However, greater bandwidth provides more potential resources for processing needs. Cat6 and Cat6a cables might provide bandwidth beyond that currently needed by residential and small business customers, but the trend in technology is towards greater use of bandwidth, so the investment in higher-grade cables is not a bad idea.

In small home or business offices where many cables might be in close proximity to one another, the Cat6a is likely to outperform the Cat6 when it comes to alien crosstalk — specifically, interference from nearby cables. Cat6 cables, particularly unshielded varieties, are much more prone to alien crosstalk than Cat6a, which uses superior insulation to protect its wiring.

It is also important to upgrade network equipment like routers and cable modems to be compatible with Cat6 or Cat6a cables; you may not be able to take full advantage of the higher bandwidth afforded by the cables if the bottleneck in the network is a slow modem or router.

Although for a small network this could mean a difference of less than $100 in cable costs, one needs to consider that connection components and patch cables are more expensive for Cat6 cabling than for Cat5e or earlier versions. This is due to the higher requirements needed to ensure transmission speeds and sustained performance. The bottom line is that the initial investment is probably higher, but the network's capacity and performance will most likely be much better and more reliable.