LAN, which stands for local area network, and WAN, which stands for wide area network, are two types of networks that allow for interconnectivity between computers. As the naming conventions suggest, LANs are for smaller, more localized networking — in a home, business, school, etc. — while WANs cover larger areas, such as cities, and even allow computers in different nations to connect. LANs are typically faster and more secure than WANs, but WANs enable more widespread connectivity. And while LANs tend to be owned, controlled and managed in-house by the organization where they are deployed, WANs typically require two or more of their constituent LANs to be connected over the public Internet or via a private connection established by a third-party telecommunications provider.

What is a LAN?

Local area networks (LANs) allow computers and devices that are near each other — and usually making use of the same switch or router — to connect to share files and complete tasks. Consisting only of everyday devices (e.g., desktops, laptops, tablets, printers), router and/or switch, and Ethernet cables or wireless cards, LANs are relatively inexpensive to set up and are commonly used in homes.

Ethernet cables, like the Cat5, Cat5e, and Cat6 and Cat6a, can be used to physically connect computers to the network. In the instances where fiber-to-the-home (or similar) is available, copper cabling may also be used at some point. Wi-Fi has become one of the most popular methods for wireless networking over a local network.

What is a WAN?

A wide area network (WAN) is used to connect computers that are not close to one another. It is possible — and almost always the case — that LANs are connected to WANs. This enables small home or office networks to connect to wider networks, such as those across state or country lines. Most WANs connect through public networks, like the telephone system, or via leased lines. The Internet, which connects computers all around the world, can be considered the largest WAN in existence. 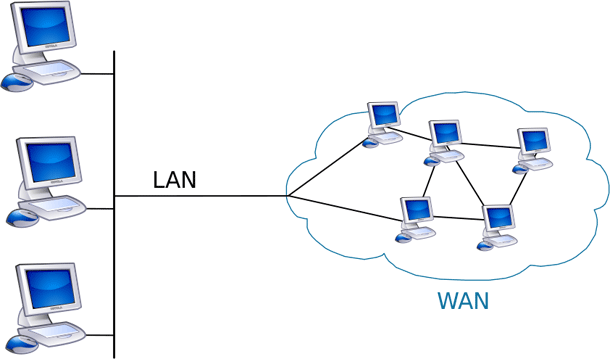 Many interconnected LANs can become part of a larger WAN.

How fast data can be transferred over a LAN or WAN depends on the quality and data transfer capabilities of one's hardware and cables.

Having all the computers in a LAN physically connected to a router (or sometimes a switch) is the fastest way to transfer data between computers on a LAN. Moreover, using modern cables — Cat5e and better — will ensure the best data transfer speeds.

WAN speeds are affected by a number of factors. The equipment used in LANs that are connected to WANs affects a user's experience, as does the type of cabling used in the wide area network itself. WANs are typically slower than LANs due to the distance data must travel. For example, data transfers between two different states in the U.S. are faster than data transfers between London and Los Angeles. High-quality, copper submarine cables are used to help speed up data transfers between nations.

Wirelessly transferring data via Wi-Fi significantly slows down transfer speeds, as typical wireless technology has a theoretical maximum speed that is lower than a wired connection's theoretical maximum speed.[1] Wireless connections will also likely feel less reliable, as wireless signals may experience interference from other devices' signals, from separating walls, from radio waves, etc. If consistent high speeds are needed within a LAN or WAN, particularly for business or gaming purposes, one should be physically connected to the network.

The most secure computer is one that is not connected to any network. LANs are safer than WANs, just by the nature and scope of a wide area network. The more people involved in interconnectivity, the greater chance there is for foul play. Using proper router security settings can help protect computers that connect to a network.