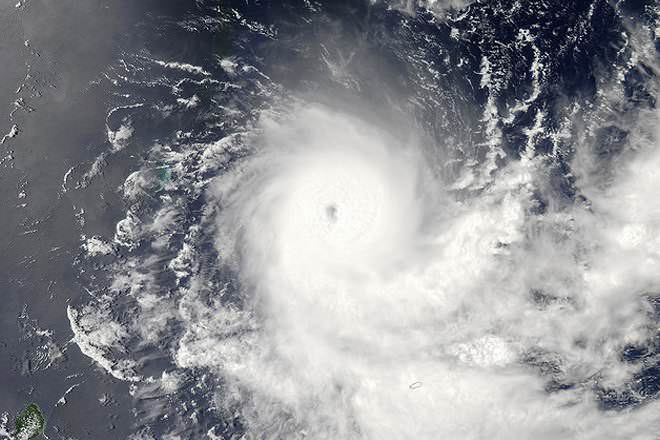 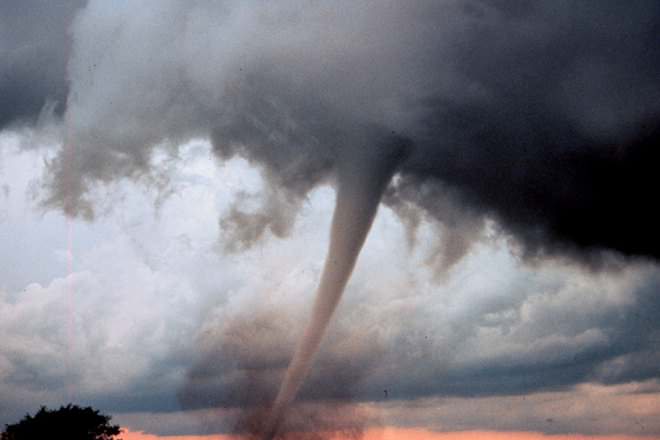 Cyclones and tornadoes are both stormy atmospheric systems that have the potential of causing destruction. They are caused due to instability in atmospheric conditions. According to the region and severity of stormy conditions, these storms may be referred to as typhoons, hurricanes, tropical cyclones and others.

A cyclone is defined in the dictionary as "an atmospheric system characterized by the rapid inward circulation of air masses about a low-pressure center, usually accompanied by stormy often destructive weather".

A tornado is defined in the dictionary as "a rotating column of air ranging in width from a few yards to more than a mile and whirling at destructively high speeds, usually accompanied by a funnel-shaped downward extension of a cumulonimbus cloud". The wind speeds of tornadoes range from 40 mph to 110 mph, span about 75 m across and can travel a few miles. In extreme cases, tornadoes have also reached a speed of 300 mph.

Cyclones begin in tropical regions such as Pacific islands, Northern Australia and other areas.

Tornadoes have been spotted in all continents except Antarctica. Highest frequencies occur in the Netherlands, and up to 1200 on average in the United States.

Cyclones have a low pressure center which is called the “eye”, and the wind circling around is counter clockwise on the northern hemisphere and clockwise in the southern hemisphere. Speed of cyclones varies from 32 to 200 kmph. Cyclones mainly occur in a particular season and mainly affect the coastal areas. Cyclones can be of six main types: polar, polar low, extratropical, subtropical, tropical and mesocyclones.

There are many shapes and sizes of tornadoes. Tornadoes look like big funnels low in height with a cylindrical profile are referred to as “stovepipe” tornado, whereas those that are like large wedges stuck to the ground are called wedges. Tornadoes can also be a small swirl of dust close to the ground and not easily identifiable. Similarly tornadoes can assume twisted and rope-like shape that narrow and extends from the clouds down in a long and narrow tube like fashion; these are referred to as “rope tornado”. Tornadoes with more than one vortex can swirl around one common centre and appear as a single funnel. The types of tornadoes include multiple vortex, waterspout, gustnado, dare devil, fire whirls and steam devils.

The scale for measuring cyclones is called the Beaufort Scale and Saffir-Simpson scale and may vary in different countries. The scale for measuring the intensity of cyclones depends on the intensity of damage and the wind speed. The scale ranges from negligible house damage, and destruction of plants and tress to extensive damage and widespread destruction, with wind speed ranging from 74 to 156 mph.

The intensity of tornadoes can also vary in intensity those with a longer track being stronger. The scale used for rating the strength of tornadoes is called the Fujita (F), Enhanced Fujita (EF), and TORRO (T) Scale. The range varies from F0, EF0 or T0 for minimal damage (damages trees but not buildings) up to F5, EF5 or T11 for vast degree of damage (buildings and skyscrapers end up getting damaged).In the United States, maximum tornadoes (80%) fall into the EF0 and EF1 (T0 to T3) category and less than 1% are violent (EF4, T8 or more).

There are 10-14 cyclones that occur per year.

The United States records about 1200 tornadoes per year, whereas the Netherlands records the highest number of tornadoes per area compared to other countries. Other countries that have frequent occurrence of tornadoes include South Africa, Paraguay, parts of Argentina, and parts of Europe, Australia and New Zealand. Tornadoes occur commonly in spring and the fall season and are less common in winters.

Cyclones and tornadoes are detected by Pulse-Doppler radar, photogrametry, and ground swirl patterns.

The Difference between Cyclone and Tornado is HUGE.
To a man on the ground --- cyclone is a day with a breeze or wind. A cyclone can be 2-300 miles wide and slowly rotating around a LOW pressure zone.
TORNADO is a tight rotation from a few feet to two miles wide and with possible winds of over 300+ miles per hour. Twister is slang for a tornado.
Cyclones are always present and Tornadoes are storms that KILL.