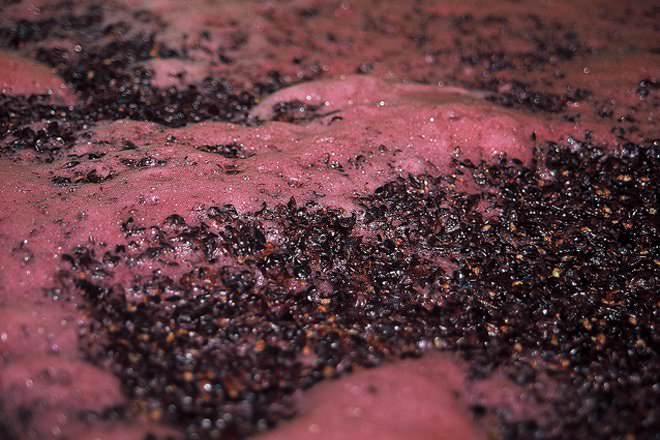 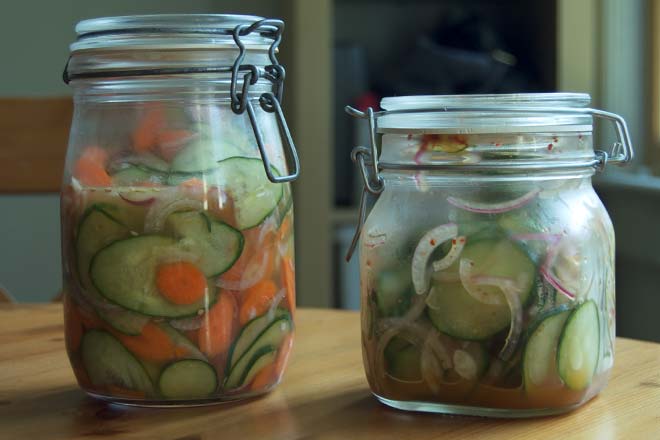 Fermenting and pickling are methods to treat perishable food, usually with the intent of preserving it for a long period. 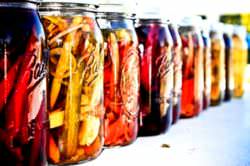 The term pickle is derived from the Dutch word pekel, meaning brine. Salt beef and salt pork were common staples for sailors on long voyages. Although the process was invented to preserve foods, pickles are also made to accompany main dishes.

The chemistry of fermentation were first investigated by Louis Pasteur in 1860, who called the process la vie sans air, or life without air. The primary benefit of fermentation is the conversion of sugars and other carbohydrates e.g., converting juice into wine, grains into beer, carbohydrates into carbon dioxide to leaven bread, and sugars in vegetables into preservative organic acids. 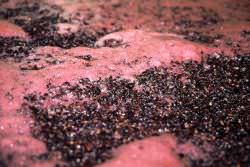 Grapes being fermented for Pinot Noir at a winery

For pickling vegetables, the firmest vegetables are chosen. The pickling liquid or brine usually consists of vinegar, water and salt boiled together. The vegetables are tightly placed in a boiled and sterilized canning jar. The boiling brine is poured over the vegetables and in to the jar and sealed for a couple of weeks in a cool place.

Fermentation is carried out without oxygen, and is therefore an anaerobic process. Fermentation is also important in baking. Yeast is mixed in with the dough, so as to consume sugar. Carbon dioxide causes the dough to expand during the rising phase. Once in the oven, fermentation ceases as the yeast dies from the heat. Sugar from grapes (for wine) or grain (for beer) is fermented by strains of yeast chosen for their tolerance of alcohol and other characteristics. The yeast continues to ferment until either the sugar is depleted, or their fermenting enzymes become inhibited by the build-up of products. In both wine and beer-making, initial fermentation occurs in large vats, allowing the carbon dioxide to bubble off. For most wines, bottling is done only after fermentation has ceased. Champagne and other "sparkling" wines are bottled before the end of fermentation, causing some carbon dioxide to be trapped in the bottle, where it becomes dissolved in the liquid. Most beers are also completely fermented before bottling, with carbon dioxide added back in just before capping. You can ferment alcohol just by waiting for wild yeast to colonize any fruit juice or grain mash, but the results are not likely to be pretty. There are strains of yeast known to be good for brewing.

Common foods that use fermentation in preparation: