Although both maze and labyrinth depict a complex and confusing series of pathways, the two are different. A maze is a complex, branching (multicursal) puzzle that includes choices of path and direction, while a labyrinth is unicursal, i.e., has only a single, non-branching path, which leads to the center.

A labyrinth may be complex but is not difficult to navigate because it has a single unambiguous route to the center and back. Mazes can be constructed with varying levels of difficulty and complexity. 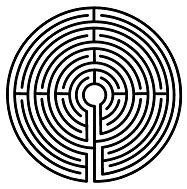 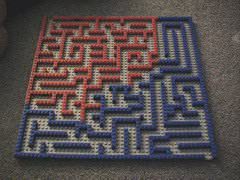 A maze made from Lego blocks

A labyrinth typically has only one entrance and the objective is to get to the center and then return. On the other hand, a maze may have an entrance and an exit with a complex path between the two.

Labyrinth is a word of pre-Greek ("Pelasgian") origin absorbed by Classical Greek. It is also related to Lydian labrys which means double-edged axe and ‘inthos’ means place.

The word maze does not have much of a history. There was no distinction between the usage of the word maze and labyrinth. It was a place where you could wander in confusion or get lost. In modern times there are different types of maze:

In 1970 there was craze for maze; it was equally famous among children and adults. Vladimir Koziakin, Rick and Glory Brightfield, Dave Phillips, Larry Evans, and Greg Bright were famous for their puzzle books. In later years people became more and more innovative with their drawings of mazes. Larry Evans and Bernard Meyers made mazes on 3-D structures.

A labyrinth was considered a trap for mean spirits. In some places it is depicted as a path for ritual dances. In medieval times it took a more spiritual notion of the hard path to god, traversing the path of a labyrinth was thought of as going on a pilgrimage. Later on the religious connotation was lost and it took the form of entertainment. Recently there has been resurgence in its spiritual aspect and people get into meditative mood while going through a labyrinth.

This video explains the difference between a maze and a labyrinth.