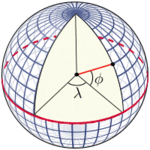 Latitude (φ) and longitude (λ) on a graticule.

Latitude and longitude values on earth

Latitude and longitude are both measured in degrees, minutes and seconds. There are 60 minutes in each degree and 60 seconds in each minute.

Values for longitude range from 0 (for the Prime Meridian) to 180 degrees. They are denoted by the letters E or W to represent direction. Alternatively, positive values may be used east of the Prime Meridian and negative in the west.

They range from 0 (for the Equator) to 90 (for the north and south poles). Latitudes are not only parallel but equidistant; degrees of latitudes are all roughly 69 miles apart. Values for latitude are positive in the Northern hemisphere and negative for the Southern hemisphere. Alternatively, the letters N and S may be used to denote the location.

The Prime Meridian passes through the Royal Observatory in Greenwich, UK. Meridians are drawn in such a way that at the equator, the angle between the lines connecting both meridians to the center of the earth is one degree.

The latitude of a location is measured by observing the inclination of the sun or the position of known stars in the sky and calculating the angular distance from the horizon to them.

This is an educational video about latitudes and longitudes.

Besides the equator, four other parallels are of significance[1]:

In everyday life, the longitude for a location can be approximated using the time difference between that location and UTC. The sun moves across the sky at a rate of 15 degrees per hour (360°/day). So if the time zone is three hours ahead of UTC then that location is near 45° longitude (3 hours × 15° per hour = 45°). Longitudes converge at the Poles so calculations that are accurate for other positions may be inaccurate at the Poles.