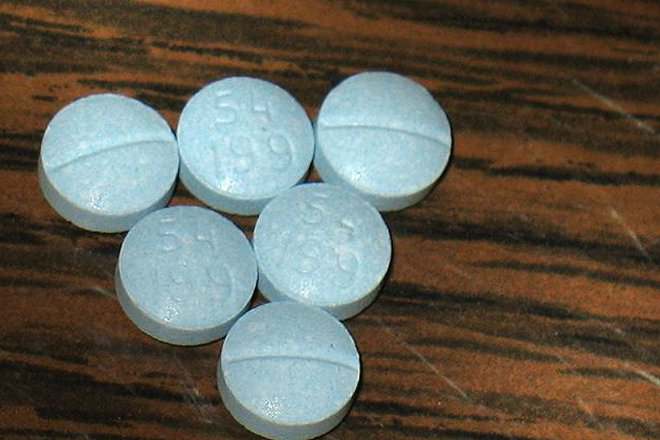 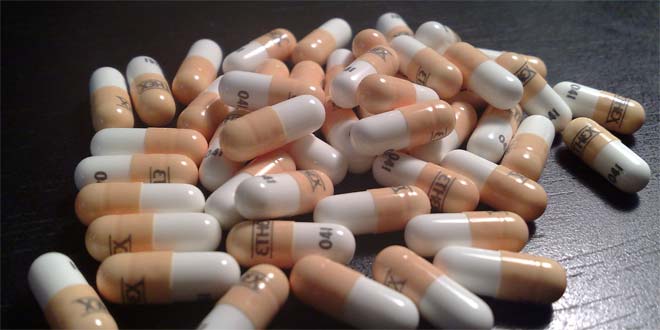 The active ingredient in OxyContin is oxycodone but OxyContin (a brand name derived from "oxycodone continuous") has a time-release mechanism, which means the drug is released in the body over a period of time and patients have to take the drug less often. Regular oxycodone is an immediate-release drug, an opiod narcotic painkiller used to treat moderate to severe pain.

The initial adult dose of oxycodone is 5mg to 15mg taken orally every 4 to 6 hours. This can be increased up to 30mg every 4 hours.

Children who weigh over 50kg can take 5mg of oxycodone every 6 hours, which may be raised to 10mg every 3 to 4 hours over time.

OxyContin is only available in time-release form. Its initial dosage is 10mg every 12 hours, increasing to up to 640mg per day in patients with cancer pain. The average daily dose is 105mg per day.

Which is Stronger - OxyContin or Oxycodone?

This is a bit of a trick question because the active ingredient in OxyContin is oxycodone. However, oxycodone immediate release (IR) will by definition be "stronger" than a continuous release (CR) formulation that is absorbed over a period of time.

A study by the NCBI suggests that oxycodone and OxyContin are equally effective in treating moderate to severe chronic back pain. Specifically, the study concluded that

Controlled-release oxycodone given every 12 hours was comparable with immediate-release oxycodone given four times daily in efficacy and safety, and it provides convenient, twice-daily, around-the-clock treatment for selected patients with persistent back pain that is inadequately controlled by nonopioids or as-needed opioid therapy.

Other studies have focused on cancer-related pain and reached the same conclusion — immediate-release oxycodone is as effective as controlled-release OxyContin. A 2001 study echoed what a prior study in 1998 concluded:

CR oxycodone [i.e., OxyContin] every 12 hours was as effective as IR oxycodone four times daily in managing moderate to severe cancer-related pain and was associated with fewer reports of adverse events.

When Purdue launched OxyContin, the pharmaceutical company made the claim that one dose of OxyContin relieves pain for 12 hours, which is roughly twice as long as generic medications. But an LA Times investigation found that the claim is misleading and false because drug wears off early for many people.

To combat this phenomenon of the drug wearing off earlier, doctors can either increase the frequency or the dosage of the drug. The LA Times alleged in its reporting that

Purdue tells doctors to prescribe stronger doses, not more frequent ones, when patients complain that OxyContin doesn’t last 12 hours. That approach creates risks of its own. Research shows that the more potent the dose of an opioid such as OxyContin, the greater the possibility of overdose and death.

All opioids have well-known side effects including 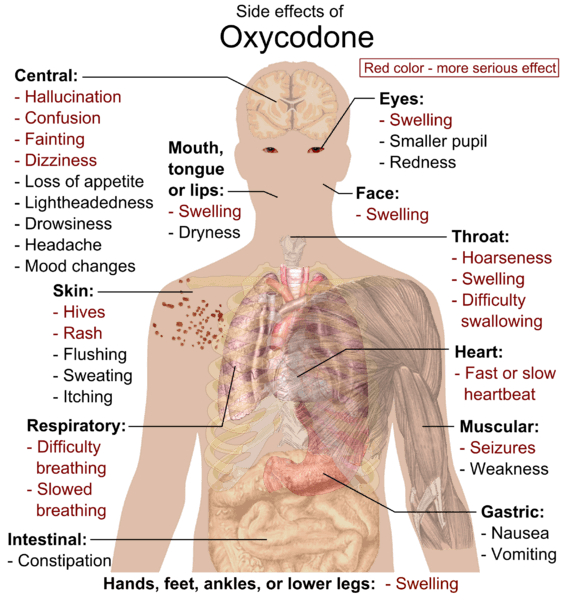 Risk of Abuse and Addiction

More than 7 million Americans have abused OxyContin, according to the National Survey on Drug Use and Health.

Prescription drug abuse of opioids like oxycodone is now more common than cocaine or heroin. When an OxyContin pill is crushed, up to 68% of the opioid (oxycodone) can be extracted from it. Drug abusers crush the OxyContin tablet and consume it by inhaling, swallowing or injecting it. This results in an intense high.

In his research paper The Promotion and Marketing of OxyContin: Commercial Triumph, Public Health Tragedy, Dr. Art Van Zee writes that Purdue, the manufacturer of OxyContin, systematically and deliberately underrepresented the risk of addiction with OxyContin in an effort to boost sales, especially for non-cancer-related chronic pain.

In 2007, Purdue and 3 of its executives pled guilty to criminal charges of misbranding OxyContin by claiming that it was less addictive and less subject to abuse and diversion than other opioids. They were fined $634 million. They also paid over $19 million to a group of states and in 2015 Purdue paid $24 million to resolve a lawsuit filed by the state of Kentucky.

In August 2017, South Carolina sued Purdue for unfair and deceptive marketing of painkillers contributing to opioid abuse and addiction. The lawsuit alleges that even after a 2007 settlement with South Carolina, Purdue has continued to downplay the addictiveness of its opioid products and overstated the benefits compared to other pain management treatments.

Everydayhealth reports that oxycodone costs, on average, $18.12 per month for those with insurance. OxyContin costs an average of $87.78 per month with insurance. Oxycodone is a generic active ingredient and there are many manufacturers that sell this drug. On the other hand OxyContin is a brand name drug by Purdue Pharma and like all brand name drugs costs significantly more than generics.

Oxycodone and OxyContin are FDA pregnancy category B and so are not expected to harm an unborn baby. You should not breast feed while taking oxycodone or OxyContin.

OxyContin has the same overdose symptoms. However, the danger of overdose is more significant in OxyContin than in oxycodone, as there are more milligrams of oxycodone per pill. If OxyContin is chewed, it can release 12 hours worth of medicine in a few minutes.

you cannot crush OC to misuse it like that anymore. They have added something to the tablets that prevents this.. gelatin or something.. it won't absorb like that anymore.. (that's not to say it cannot be dangerous- be careful! it is a 12-hr drug.. I don't know how any doc can get around the DEA to write 3x a day or to EVER have more than 160mg twice a day.. not to mention the pharmacy! They're risking everything. It's very serious! I know it doesn't always WORK for some people for 12 hours.. but the DEA doesn't care.)

they started doing this to some of the generic brands around 2005 or so and by the end of 2009 there don't seem to be any, including brand name, that are not like this. I think that they don't work the same that way (using as directed) and give a couple unpleasant effects for me, but apparently we don't get a choice because people break the law and provide these meds to just anyone and they go to addicts (and there's nothing else to change to).. and the people with pain get to suffer. more. nice, huh?

oh-- but the price stayed the same anyway.

forgot to mention that.


And your pharmacist should have told you generics were available.. That's sad! Did insurance cover the cost? (as that could be why he/she didn't say something..)

i'm been taking oxycontin (CR) for many years (fentanyl [durogesic] patches before that...).

Note here it says CR is a 12 hour release.... I personally reackon that's crap. My first tablet in the day takes effect 30-75 mins after swallowing (depending upon food in stomach etc), and its effect is strong for 3-4 hours max. Next tablet I take is at 4 hour mark & find it lasts at strength for ~5 hours (as if half-life); next tablet has 'strong' effect for 6 hours (each longer than prior).

Because they act as a stimulant (cause my heart rate to jump significantly) - I can't have any from mid-afternoon-night & try to get asleep before 'withdrawal effects'. Results is a "very unpleasant" morning for at least two hours (start day with two oxy tabs).

My highest prescribed dose is 160mb/day; was given in 40mb tabs; but by getting Dr to give me smaller mg tablets (10mg & 15mg) my use has dropped significantly. Note I'm using 2-3 tabs first time (eg. 2x15mg + 10mg=so original 40mg); but next might be 15+10mg=25mg). Locally federal authority only monitor total mg/day not the tablets used.