Celsius and Fahrenheit are different scales to measure temperature.

About Celsius and Fahrenheit scales

Celsius is, or relates to, the Celsius temperature scale (previously known as the centigrade scale). The degree Celsius (symbol: °C) can refer to a specific temperature on the Celsius scale as well as serve as unit increment to indicate a temperature interval(a difference between two temperatures or an uncertainty). “Celsius” is named after the Swedish astronomer Anders Celsius (1701-1744), who developed a similar temperature scale two years before his death.

Until 1954, 0 °C on the Celsius scale was defined as the melting point of ice and 100 °C was defined as the boiling point of water under a pressure of one standard atmosphere; this close equivalence is taught in schools today. However, the unit “degree Celsius” and the Celsius scale are currently, by international agreement, defined by two different points: absolute zero, and the triple point of specially prepared water. This definition also precisely relates the Celsius scale to the Kelvin scale, which is the SI base unit of temperature (symbol: K). Absolute zero—the temperature at which nothing could be colder and no heat energy remains in a substance—is defined as being precisely 0 K and −273.15 °C. The triple point of water is defined as being precisely 273.16 K and 0.01 °C.

This picture compares Celsius and Fahrenheit scales on a thermometer. 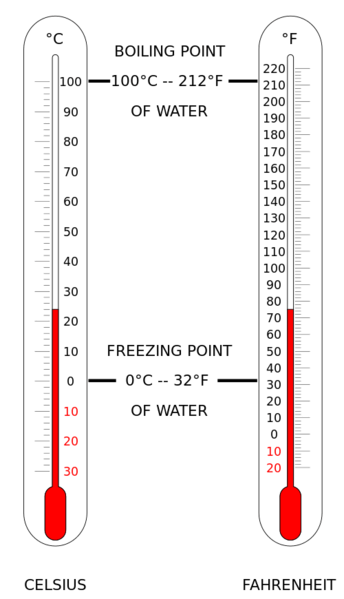 In the United States the Fahrenheit system continues to be the accepted standard for non-scientific use. All other countries have adopted Celsius as the primary scale in use. Fahrenheit is sometimes used by older generations in English speaking countries, especially for measurement of higher temperatures. The United Kingdom has almost exclusively used the Celsius scale since the 1970s, with the notable exception that some broadcasters and publications still quote Fahrenheit air temperatures occasionally in weather forecasts, for the benefit of generations born before about 1950, and air-temperature thermometers sold still show both scales for the same reason.

The Fahrenheit scale was the primary temperature standard for climatic, industrial and medical purposes in most English-speaking countries until the 1960s. In the late 1960s and 1970s, the Celsius (formerly Centigrade) scale was phased in by governments as part of the standardizing process of metrication.

Fahrenheit supporters assert its previous popularity was due to Fahrenheit’s user-friendliness. The unit of measure, being only 5⁄9 the size of the Celsius degree, permits more precise communication of measurements without resorting to fractional degrees. Also, the ambient air temperature in most inhabited regions of the world tends not to go far beyond the range of 0 °F to 100 °F: therefore, the Fahrenheit scale would reflect the perceived ambient temperatures, following 10-degree bands that emerge in the Fahrenheit system. Also, coincidentally, the smallest sensible temperature change averages one Fahrenheit degree; that is, the average person can just detect a temperature difference of a single degree.

Relationship with the Kelvin scale