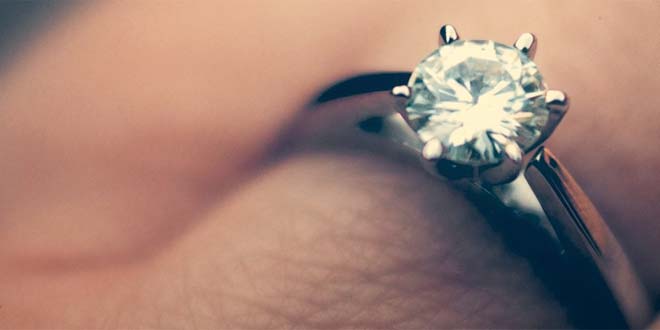 Moissanite costs 1/10th the price of diamonds and sparkles brighter because of its higher refractive index. The occurrence of moissanite (silicon carbide) in nature is very rare, but it can now be manufactured in factories to be used as an imitation for diamonds.

Other than price, a big difference between diamonds and moissanite is that diamond is a great electric insulator, while moissanite is an electric conductor.

Moissanite is a rare, naturally-occurring mineral with various crystalline polymorphs, although it is now possible to manufacture moissanite in factories, making it ten times less expensive than diamond. Moissanite has a high refractive index and is hence much more brilliant as well as iridescent as compared to a diamond.

Typical colors include transparent, green and yellow. Moissanite is often found as an inclusion in diamonds, xenoliths and ultramafic rocks such as kimberlite and lamproite. It is often an inclusion in carbonaceous chrondite meteorites as well. 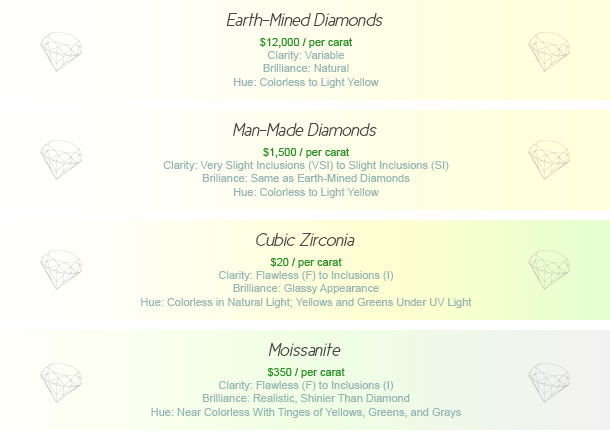 How to Identify Diamond from Moissanite

While experienced jewelers may be able to tell the difference between diamond and moissanite, there are tester tools designed specially to tell the two apart is available in the market. Moissanite has a higher refractive index and dispersion; it is more brilliant and iridescent than a diamond. In fact, the bigger the moissanite, the easier it becomes to identify it as it tends to lose its hue. Another test is that moissante is a conductor of electricity while diamond is an insulator.

More on diamond and moissanite:

The properties of diamond and moissanite are quite similar - more similar than those of cubic zirconia. The chemical formula is for diamond is C, while that of moissanite is SiC.

Both diamond and moissanite have an adamantine luster, though moissanite's can range to metallic.

Diamond is the hardest known substance. It scores a 10 on the Mohs scale. It is a good abrasive and can be scratched only by other diamonds. Because of this property, a diamond is used to polish, cut, or wear away any material, including other diamonds.

Moissanite is nearly as hard, scoring 9.5 on the Mohs scale.

Diamond is an isometric crystal from the isometric-hexoctahedral crystal system, or categorization of crystal types. Its crystal habit is octahedral, meaning diamonds typically form in this shape.

Diamonds cost about ten times more than moissanite. Gem-grade diamonds are used in high-end jewelry. Rough diamonds must first be cut and polished before they are sold as gemstones, either already set in jewelry or loose.

Like moissanite, diamonds can be created in a lab. However, unlike diamond simulants like moissanite, cubic zirconia, white sapphire and yag, lab-created (aka synthetic) diamonds are indistinguishable in appearance and properties from a natural diamond. Lab-created diamonds, although cheaper than natural mined diamonds, cost much more than moissanite and other simulants.

The video below gives detailed information on the types of diamonds and its simulants regarding their price, pros and cons:

Moissanite is also used for jewelry, often as a simulation of diamonds. Apart from jewelry, moissanite is often used to replace diamonds in high-pressure experiments. Since natural moissanite is so rare, the created form of the mineral is usually used for both purposes. The cost of moissanite is approximately 1/10th that of diamond.

Diamonds have been known in India for millennia, having been treasured in their use in religious icons. Diamonds are formed when carbon is exposed to high pressure at a comparatively low temperature range. They are only found in the lithospheric mantle below stable continental plates and at the site of meteor strikes. Moissanite is named after French chemist Henri Moissan, who discovered the rare mineral in a meteor crater. Moissanite occurs as an inclusion in other minerals. It is found only in the upper mantle rock of the earth and at the site of a meteor strike.