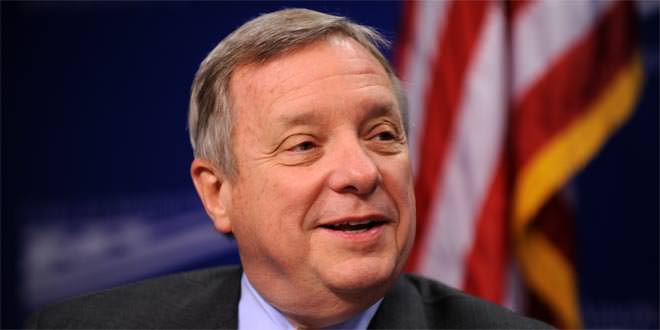 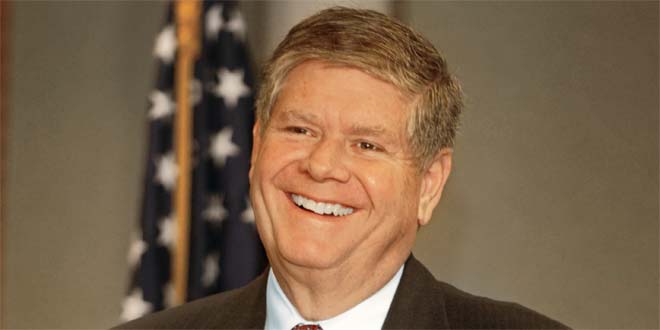 This is an unbiased comparison of the political positions and policy proposals of incumbent Democrat Senator Dick Durbin and Republican Illinois State Senator Jim Oberweis, candidates in Illinois' U.S. Senate election in November 2014.

Dick Durbin has served as a U.S. senator since 1996 and has been a prominent Democratic leader, serving as Senate Majority Whip. Opposing Durbin for his seat is Republican Jim Oberweis, a state senator who currently represents District 25. As a strong supporter of liberal fiscal policy, women's rights, environmental protection, and gun control, Durbin is considered a liberal or progressive Democrat. Oberweis is a conservative Republican who opposes abortion, supports concealed carry legislation, and wants to explore and drill in a protected wildlife refuge; he has previously been perceived as being "anti-immigrant." Durbin and Oberweis disagree with each other on nearly every issue.

Originally from East St. Louis, Illinois, Durbin is a graduate of the Georgetown University schools of foreign service and law. He worked for a short period of time as an attorney for the state of Illinois. In 1982, he was elected to Congress to represent Springfield, Illinois. He was first elected to the U.S. Senate in 1996 and has served since. Durbin is among the leaders of the Democratic Party, serving as Majority Whip in the Senate. He is a longtime adviser to President Barack Obama.

James Oberweis is a graduate of Marmion Military Academy in Aurora Illinois and holds an MBA from the University of Chicago. After graduating, he became an investment stockbroker, and in 1976 he founded his own financial newsletter, The Oberweis Report. He went on to found Oberweis Securities in Aurora and later Oberweis Dairy. In recent years, he has sought political office six times and has been a candidate in gubernatorial, senatorial, and representative elections. Since 2012, he has been a state senator representing the Aurora area of northern Illinois.

Durbin has supported a generally liberal economic policy, favoring stimulus spending, entitlement programs, and subsidies, as well as cutting the federal budget, stances that are generally in line with the mainstream Democratic party. Oberweis follows a conservative reading of economy policy, favoring ending government regulation and reducing taxes as a means of growth.

Durbin votes progressively on tax issues and favors “closing loopholes” in the U.S. tax code that cause the wealthy to receive a cumulative $1.2 trillion in tax breaks each year. He supports increasing the tax rate on Americans who earn more than $1 million per year. In the past (2001), he has voted for increasing tax deductions for college tuition. In 2013, he stated there should be energy taxes to pay for public infrastructure.

Oberweis believes in cutting taxes specifically for businesses. He claims that government regulations can prevent businesses from expanding and may even destroy job opportunities.

Historically, Durbin has been very supportive of minimum wage legislation, voting for increases under President George W. Bush in 2005 and 2007. Recently, along with Massachusetts Senator Elizabeth Warren and Illinois Governor Pat Quinn, Durbin has worked repeatedly to increase the minimum wage at both the state and federal level.[1][2][3]

In April 2014, Oberweis said he is for increasing Illinois' minimum wage to $10.00/hr for those 26 and older over the course of three years. Under this plan, those aged 18 to 25 would receive $8.25/hr, and those under 18 would receive $7.75/hr. His plan would bar municipalities from setting a higher minimum wage.

Durbin has been critical of the banking industry, saying it “owns the place” in Washington. In 2009, Durbin stated that large banks were responsible for the 2008 financial crisis. However, Durbin was involved in orchestrating bank bailouts after the crisis. He has supported stimulus spending as an engine of economic recovery. Oberweis opposes government intervention in the labor market, including stimulus spending, and says that “overspending and over-borrowing crowds out jobs.”

Believing it would spur economic growth, Oberweis would reduce the size of government. He has said he wants to reform tort law.

Both Durbin[4] and Oberweis support cuts for military funding.

A strong supporter of the Affordable Healthcare Act (a.k.a., Obamacare), Durbin has also voted to expand the Children's Health Insurance Program (CHIP), expand Medicaid enrollment, and regulate tobacco as a drug. He favors allowing the importation of drugs from Canada.

Generally, Oberweis does not support the federal Affordable Care Act, though he supports coverage of pre-existing conditions and for young adults to stay on parents' plans until age 26. He has said he believes the ACA will hurt small businesses and that the law should be "repealed and replaced," though he did not say with what. Oberweis has said that he does not support a single-payer health insurance system, either.

He voted in favor of a bill that would allow psychologists with a doctorate to prescribe medication and voted against a bill that would provide certain Medicaid coverage to the elderly. He voted for increasing physicians' license fees.

Durbin would allow states to enact emissions standards higher than the federal government and does not support opening the Arctic National Wildlife Refuge to energy exploration. He favors reducing national oil usage by 40 percent by 2025 in opposition to a proposed 5 percent reduction. Durbin was in favor of the Cash for Clunkers stimulus program and is rated highly by animal welfare groups, particularly pro-dog groups. He sought to strengthen federal animal fighting laws in 2007.

Oberweis strongly opposes environmental regulations that would inhibit business growth, including caps on emissions. He has said that renewable energy is for the future, but that taking advantage of current resources is necessary; he wants to allow drilling in the Arctic National Wildlife Refuge. The Illinois Environmental Council gives him a 50% rating.

Durbin supports abortion rights, though he began his adult life in opposition to abortion. Oberweis believes abortion should be outlawed and that Planned Parenthood should be defunded.

On federal student loans, Durbin supports extending low interest rates until 2015. He supports sex education as opposed to abstinence-only sex education, and received a 100% rating from the National Education Association teachers' union. Oberweis does not support contraception-based sex education in schools and voted against the expansion of sex education in Illinois schools.

Durbin is opposed to high-capacity gun magazines, in favor of background checks to buy guns at gun shows, and received an F rating from the National Rifle Association. He recently co-sponsored a bill that would restrict the sale of assault weapons.

On his website, Oberweis claims to be an “ardent” Second Amendment supporter and has voted in favor of concealed carry. He receives an 83% approval rating from the NRA.

Durbin supports liberal immigration policies, including extending immigration rights to gay couples. He has stated publicly that “our border with Mexico is the strongest it's been in 40 years.” He supports giving Social Security benefits to immigrants and giving guest workers a path to citizenship. However, he has also supported tax credits for companies which hire American citizens, rather than immigrants.

In 2004, Oberweis ran a series of advertisements on television that were widely perceived as being anti-immigrant. In the commercials, Oberweis said that “illegal aliens are coming here to take American workers' jobs, drive down wages, and take advantage of government benefits such as free health care.” He has also advocated to make English the official language of the United States. In early 2014, he stated that adult illegal immigrants should be given visas, but no path to citizenship; he believes those who were brought over as children should have a path to citizenship, however.

Disabled American Veterans give Durbin a 100% rating for his efforts to increase or maintain funding for veterans programs. To date, Oberweis has no votes or endorsements regarding veterans.

Aside from broadly supporting reproductive and abortion rights, Durbin has also voted to reauthorize the Violence Against Women Act, and was honored by Planned Parenthood and the United Nations Foundation in 2011 for being an advocate for women's rights.

Oberweis has not made any notable policy decisions about women's rights since becoming a state Senator in 2012, but does oppose abortion rights and Planned Parenthood funding.

This is a video of Oberweis and Sen. Durbin at the Chicago Tribune Editorial Board endorsement debate: