House of Representatives vs. Senate 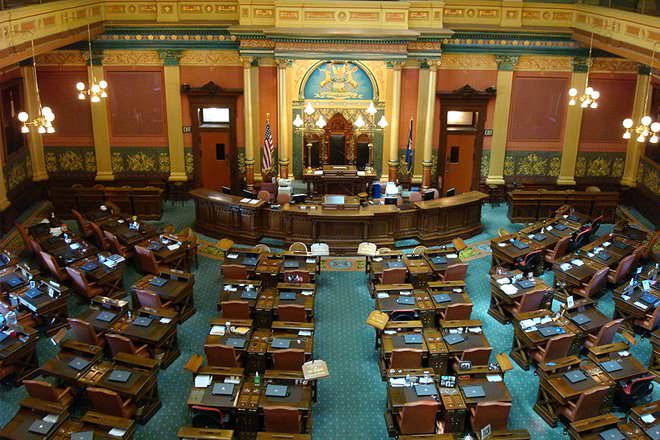 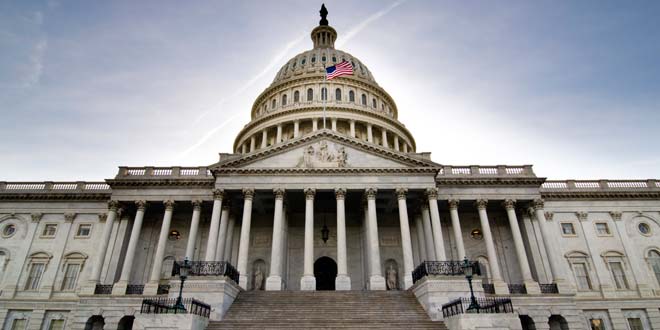 Contents: House of Representatives vs Senate

Size of Senate vs. House

The Reapportionment Act of 1929 set the final number of the House at the current 435, with district sizes adjusted according to population growth. However, as district borders were never defined definitively, they can and often do stretch into peculiar shapes due to a practice known as gerrymandering.

Gerrymandering is used at the state legislature level to create districts that overwhelmingly favor one party. Federal and Supreme Court rulings have overturned gerrymandering efforts that have been perceived to be based on race, but otherwise some districts have been reconfigured to give one or another party an extreme political advantage, thus allowing that party to secure more power in the state and in the House of Representatives. 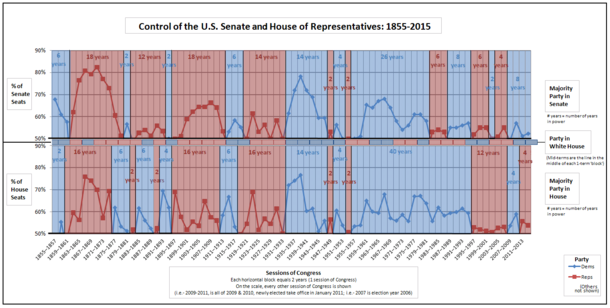 A line graph showing which political parties have controlled the U.S. House of Representatives and Senate over the years. Click to enlarge.

Roles of Representatives and Senators

The House plays a major role in government, mainly that of initiating all revenue-based legislation. Any proposal to raise taxes must come from the House, with Senate review and approval. The Senate, on the other hand, has sole power of approval on foreign treaties and cabinet and judicial nominations, including appointments to the Supreme Court.

In cases of impeachment (e.g., Andrew Johnson in 1868 and Bill Clinton in 1998), the House determines if charges can be brought against the official, and a simple majority vote approves or rejects the filing of charges (the impeachment process). If approved, the Senate then serves as the investigative/judicial body to determine if the charges merit removing the accused official from his or her office. However, the vote in the Senate has to represent "a significant majority," usually taken to mean 67 of the 100 votes.

Members of Congress are deemed to be "beyond the power of arrest" while in office, except in cases of treason, murder, or fraud. This stipulation has been used by representatives and senators to avoid subpoenas and other judicial procedures. A senator can waive the privilege at any time, but a member of the House has to submit his or her petition to a general vote. If a simple majority approves, the privilege can be waived.

Congress has the power to subpoena any citizen. Noncompliance with a congressional subpoena can carry up to a one-year jail sentence. The case is heard in a judicial forum, and punishment (a sentence) for those found guilty of "contempt of Congress" is handled strictly by the judicial system.

The succession order in the federal government is president, vice president and then Speaker of the House, the leader of the representatives. The vice president is considered the "president" of the Senate, though he or she is not required or even expected to attend most Senate sessions. The Senate elects a "President Pro Tempore," often the senior, or longest-serving, senator of the majority party, who is responsible for managing day-to-day business.

Senators are elected for a six-year term, but House representatives only have two-year terms before they need to seek reelection. Every member of the House is up for election or reelection every two years, but the Senate has a staggered system wherein only one-third of the Senators are up for election or reelection every two years. It is possible for the House to change to a large extent (in terms of party control) every two years, but changes are slower in the Senate. In both chambers, incumbents have a great advantage over challengers, winning more than 90% of all contested races.

Most of Congress' work takes place in committees. Both the House and Senate have standing, special, conference, and joint committees.

Standing committees are permanent and provide longer-serving members with power bases. In the House, key committees include Budget, Ways and Means, and Armed Services, while the Senate has Appropriations, Foreign Relations, and Judiciary committees. (Some committees exist in both chambers, such as Budget, Armed Services, and Veterans Affairs.) Special committees are temporary, formed to investigate, analyze, and/or evaluate specific issues. Conference committees are formed when legislation is approved in both the House and Senate; they finalize the language in legislation. Joint committees feature members of the House and Senate, with leadership of each committee alternating between members of each chamber.

Committees also have subcommittees, which are formed to focus more closely on certain issues. Some have become permanent, but most are formed for limited time frames. Although useful for zeroing in on key issues, the proliferation of committees, and especially subcommittees, has decentralized the legislative process and significantly slowed it, making Congress less responsive to changing trends and needs.

Debating legislation has stricter rules in the House than in the Senate, applicable at both the committee and whole-body levels. In the House, debate time is restricted and topics are set beforehand, with discussions limited to the agenda. In the Senate, the tactic called filibustering is allowed. Once the floor is ceded to a senator, he or she can speak for as long as the senator chooses, on any topic; no other business can be transacted while the person speaks. A filibuster is used to block potential legislation or Senate decisions until a favorable vote can be called. This has resulted in sometimes comically absurd efforts on the part of senators. For example, during a 2013 filibuster over the Affordable Care Act, Senator Ted Cruz (R-TX) read from Green Eggs and Ham.

Origins of House and Senate

In general, the House represents the population, while the Senate represents a "landed/large property" populace. In colonial times, the proposed "legislative body" had two models. The Virginia Plan, endorsed by Thomas Jefferson, created a group of representatives based on population sizes, so that more populous states would have a greater voice in legislative issues. Opposing it was the New Jersey Plan that limited each state to the same number of representatives; the plan suggested that there be something between two to five representatives per state. The New Jersey Plan was criticized for holding larger states "hostage" to smaller states, as each would have the same power base. This article in The New Yorker dissects it well:

James Madison and Alexander Hamilton absolutely hated the idea that each state should be entitled to the same number of senators regardless of size. Hamilton was withering on the topic. “As states are a collection of individual men,” he harangued his fellow-delegates at the Constitutional Convention in Philadelphia, “which ought we to respect most, the rights of the people composing them, or of the artificial beings resulting from the composition? Nothing could be more preposterous or absurd than to sacrifice the former to the latter.”

Per the Connecticut Compromise at the Constitutional Convention in Philadelphia in 1787, the United States adopted the bicameral system of the English Parliament (i.e., House of Lords and House of Commons). The compromise was between the Virginia plan (small state) and the New Jersey proposal (large state), two competing ideas on whether each state should get equal representation in the federal government or whether representation should be based on population. The compromise established that representatives in the lower house (House of Representatives) will be based on a population number (called a "district") while the upper house (Senate) would contain two representative from each state. It was also decided that all classes would be eligible to become senators, subject to age and residency restrictions.

Comments: House of Representatives vs Senate