There are 538 total electors in the Electoral College, who are chosen by each state of the United States and by the District of Columbia (but not by other territories like Puerto Rico). The number of electors for a state is based upon the voting membership of that state in Congress i.e. the number of representatives in the House plus the number of senators. There are a total of 435 Representatives and 100 Senators in Congress; so along with 3 electors from the District of Columbia that brings the total number of electors to 538. A presidential candidate needs 270 (just over 50%) electoral votes to win.

Here is a list of the number of electoral votes for each state:

How Electoral Votes are Awarded

In all states except Nebraska and Maine, electors are awarded on a winner-take-all basis. This means all electors/delegates in a state are awarded to the winner of the popular vote in that state. So in a closely contested election like 2000 (Bush v. Gore), when George Bush won Florida with a roughly 50-50% split of the popular vote in that state, he won all 27 electoral votes for Florida.

Maine and Nebraska use a slightly different method for allocating electoral votes. In the "Congressional District Method", one elector within each congressional district is selected by popular vote in that district. The remaining two electors (representing the 2 U.S. Senate seats) are selected by the statewide popular vote. This method has been used in Nebraska since 1996 and in Maine since 1972.

A faithless elector is a member of the Electoral College who does not vote for the presidential or vice-presidential candidate for whom they had pledged to vote. i.e., they vote for another candidate or fail to vote.

Electors are typically chosen and nominated by the political party or the party's presidential nominee, so chances of them turning faithless is low. Nevertheless, there were 7 faithless electors in 2016. Donald Trump ended up getting 304 electoral votes even though he won 306, and Clinton ended up with 227 even though she won 232.

What happens if no candidate gets 270 electoral votes?

If no presidential candidate gets 270 electoral votes, the decision moves to the House of Representatives, which would hold what's called a contingent election in which each state gets a single vote. This means California and Wyoming get equal power, despite CA having 50 times the population of WY. Each state's delegation votes in favor of the party that has more House seats in that state. If this were to happen in 2020, the Republican party would get a majority and elect Trump.[2]

Disadvantages of the Electoral College

Another criticism is that the electoral vote system does not penalize a state for low voter turnout or for disenfranchising its citizens (such as convicted felons, or, historically, slaves and women) The state gets the same number of votes regardless of whether voter turnout is 40% or 60%. In a popular vote, states with higher turnout will directly increase their influence in the outcome of the presidential race.

Yet another criticism is that it discourages voters in states where one party holds a substantial majority i.e. Republicans in typically blue states like California or Democrats in red states like Texas. Since electoral votes are awarded on a winner-take-all basis, even a significant minority of contrarian votes will not make any impact on the outcome of the election. On the other hand, if a popular vote were to be used then every single vote has an impact.

Advantages of the Electoral Vote over a Popular Vote

Supporters of using the electoral vote argue that it protects the rights of smaller states and is a cornerstone of American federalism. States can design their own mechanism -- without federal involvement -- for choosing their electors.

Another advantage is that the impact of any state-level problems, such as fraud, is localized. No political party can commit large-scale fraud in any one state to dramatically influence an election.

It should be noted that the Electoral College merely follows from state influence in Congress, which enacts laws and acts as an inherent checks-and-balances mechanism for the president's administration. That is to say representation for various states in Congress is also not directly proportional to their population.

The biggest criticism of the electoral vote system is that it is possible for a presidential candidate to win the popular vote and lose the electoral vote. That is, more Americans voted for the candidate but he or she still lost. While this is rare, it has happened 4 times:

Popular Support for the Electoral College

A Gallup poll in January 2013 found that a vast majority of Americans would prefer to do away with the electoral college for presidential elections. 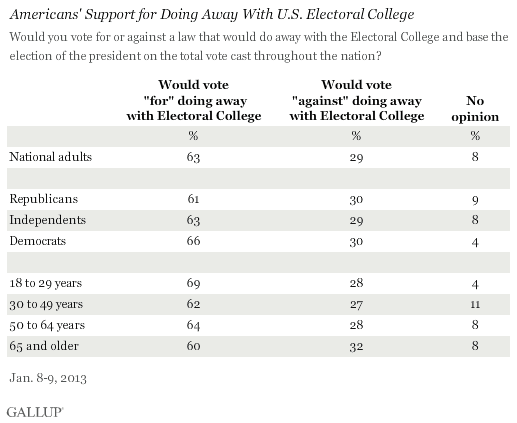 Results from a Gallup poll indicating strong support for abolishing the electoral college system for electing a President.

Implications of a Popular Vote Election

As Aaron Blake argued when he wrote for the Washington Post, the electoral college forces candidates to structure their campaign in a specific way; they focus on about a dozen "purple" or swing states — such as Florida, Ohio, Wisconsin, North Carolina, Virginia, Iowa and New Hampshire. Republicans waste no resources campaigning in decidedly blue states like Washington, Oregon and California, while Democrats avoid campaigning in red states like Texas, Georgia and Oklahoma.

If elections were decided by popular vote, campaign strategies would be very different. If Trump had campaigned more effectively in California, for example, his popular vote deficit in that state would possibly not have been as large as it was. Clinton got 4.3 million more votes than Trump in California. In other words, if the state of California were excluded, Trump would win the popular vote by 1.5 million votes. Supporters of the electoral college system say that this was exactly the kind of scenario—i.e., one large state overriding the wishes of other states—that the current system was designed to handle.[4]

Bias in favor of Republicans

As things stand now, the practical effect of the electoral college is that Republicans have an advantage over Democrats. Running an analysis of the electoral system, complete with simulations for various voting outcomes, the Economist magazine found that

The bias results from current political trends; when the system was designed over 200 years ago the situation was quite different. Every state gets only two senators, no matter how populous. The populous states happen to have large urban populations that tend to be more Democratic-leaning. So in the political atmosphere that we find ourselves in today, Democrats are at a disadvantage. Another 100 years from now, the situation may well be reversed.