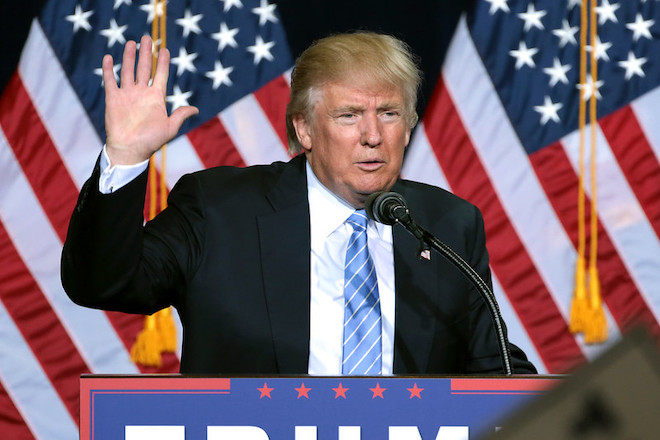 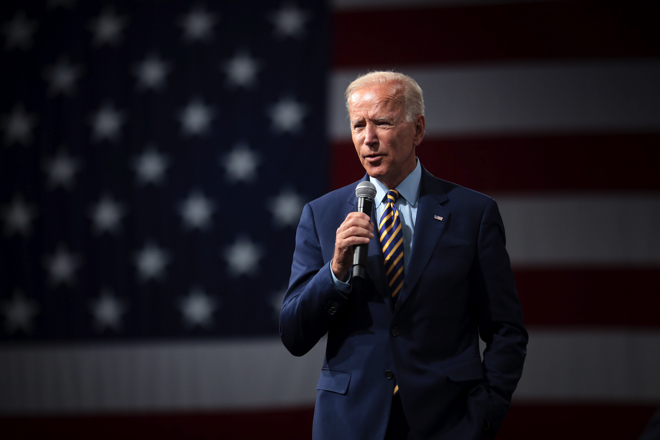 This is an unbiased comparison of the policy and political positions of Joe Biden and Donald Trump, candidates for president from the Democratic and Republican parties respectively.

For the most part, the candidates' views conform with the political platform of their party — Biden is "pro-choice" on abortion rights, Trump is "pro-life"; Biden supports the DREAM Act and a path to citizenship for undocumented immigrants, while Trump wants to deport all undocumented immigrants and build a wall on the Mexican border; Biden wants to expand gun control legislation, Trump does not; Biden wants to raise taxes on companies and "high-income" households while the Trump administration cut taxes for individuals in all income brackets, as well as all corporations.

British publication The Economist's comparison of the economic policies of the two candidates is available here and their review of Biden's policies is here.

In 2017, the Trump administration enacted tax cuts that lowered the tax rate on corporations from 35% to 20%. Notable changes for individuals were:

While the tax cut for corporations was permanent, the tax cuts for individuals are set to expire at the end of 2025. Supporters of the tax cuts point to:

Detractors point to the following problems:

As a Republican, Trump favors less regulation in order to be more business-friendly. As an example, the Trump administration rolled back an Obama administration rule that required automotive fuel economy standards to grow by 5% per year from 2021 to 2026. In March 2020, the Trump administration lowered this requirement to 1.5% per year under the SAFE rule. Critics are concerned that this will lead to more pollution and carbon emissions, hurting the environment and causing pollution-related deaths. Supporters say relaxing the regulatory requirements will result in lower costs for new cars, which will take more older clunkers off the market. Even with less aggressive improvement requirements, new cars are safer and cause fewer emissions than the older cars they would replace.

Biden has proposed increasing the minimum wage to $15 per hour nationwide. Trump has opposed this, saying states should set the minimum wage. He did say that the current federal minimum wage of $7.25 per hour is too low, but opposes any regulation raising it. Trump has also, on a different occasion, claimed that wages in America are too high. In fact, Trump has flip-flopped on the issue several times, making it hard to discern his true position — if indeed there is one.

This NYTimes article traces the evolution of Biden's stance on China. He sought closer ties with China and visited the country multiple times as Vice President. “A rising China is a positive, positive development, not only for China but for America and the world writ large,” Biden said in 2011. More recently, he has called China an authoritarian regime and its leader Xi Jinping a thug. When explaining his foreign policy, Biden wrote:

The United States does need to get tough with China. If China has its way, it will keep robbing the United States and American companies of their technology and intellectual property. It will also keep using subsidies to give its state-owned enterprises an unfair advantage—and a leg up on dominating the technologies and industries of the future. The most effective way to meet that challenge is to build a united front of U.S. allies and partners to confront China’s abusive behaviors and human rights violations, even as we seek to cooperate with Beijing on issues where our interests converge, such as climate change, nonproliferation, and global health security.

Trump has also been critical of China for the trade imbalance between the two countries, stealing US intellectual property, and not being open to U.S. companies doing business in China. His approach has been to impose tariffs on goods imported from China and use the threat of further tariffs to negotiate a trade deal to address these issues. Trump had laid out this plan before the 2016 election and acted upon it during his presidency. Republicans are generally for free trade and against tariffs, so this position has not been popular among the Republican establishment or other economic experts. Trump has praised China's leader Xi Jinping, avoided criticizing the lack of human rights and political expression, and refused to impose sanctions over the detention camps where China has forced its Uighur Muslim population.

The first debate between Joe Biden and Donald Trump was held at Case Western Reserve University in Cleveland, OH on September 29. The debate was marked by a lack of civility with Trump frequently interrupting Biden, and Biden saying "Will you shut up, man?" and "Keep yapping, man".

Highlights from the Debate (video)

The full debate video is available here. The video below has highlights:

In 2016, Senate Republican leader Mitch McConnell and other Republicans had not allowed confirmation hearings for President Obama's Supreme Court nominee Merrick Garland to replace Justine Antonin Scalia, saying the next president should choose the nominee:

Given that we are in the midst of the presidential election process, we believe that the American people should seize the opportunity to weigh in on whom they trust to nominate the next person for a lifetime appointment to the Supreme Court.

In 2020 the situation has reversed. President Trump has nominated Amy Coney Barrett to the US Supreme Court after the death of Justice Ruth Bader Ginsberg. Republicans are rushing to confirm the nominee. Debate moderator Chris Wallace asked Trump about this. Trump's response was that it was the right and responsibility of the president and the senate to appoint Supreme Court justices, and since Republicans control the White House and Senate, they will move forward.

On the other hand, Republicans have asked both Joe Biden and VP nominee Kamala Harris about whether Democrats would, if elected, "pack the court". i.e., whether they would legislate expanding the size of the Supreme Court so that there are 15 justices instead of 9. If either party does this, they would get to nominate several new judges and be able to tilt the ideological balance in their favor.

Biden blamed Trump for the over 200,000 deaths that have occurred in the United States due to coronavirus infections. He criticized Trump for saying he knew about the danger of the pandemic but kept the information from the American public so that they may not panic. Biden accused Trump of panicking himself. Trump responded by saying the death toll would have been larger under a Biden presidency. He cited banning travel from China as an early action he took (Jan 31, 10 days after the first case was reporting in Washington state). At the time, Biden had criticized Trump, calling him xenophobic. Trump said Biden would not have closed American borders for travelers from China, which would have resulted in more deaths.

Trump said he wanted to reopen the economy while Biden warned about opening when the number of cases are rising. Biden also talked about giving businesses "the help they need", without getting into specifics.

While it did not come up in the debate, Trump has been criticized for dissolving Global Health Security and Biodefense unit under the National Security Council (NSC). The unit had been set up in 2015 by Susan Rice, who was National Security Advisor under President Obama. Defendants of the move have said it was not a dissolution but a reorganization "to create the counterproliferation and biodefense directorate, which was the result of consolidating three directorates into one" (full story here).

When asked where he indeed paid only $750 in federal income tax (as The New York Times had reported), Trump responded that he had paid "millions of dollars in taxes". He did not specify whether he meant personal federal income tax or was referring to other state, local or federal taxes that his companies may have paid. Trump was unapologetic about taking advantage of tax laws to minimize his tax bill. He blamed Biden, who was a senator for 36 years and vice president for 8 years, for passing the laws that contain the loopholes that developers like Trump can take advantage of. Biden responded that he would eliminate the "Trump tax cuts", referring to the 2017 tax cuts discussed above.

The candidates sparred over how the economy was doing under the Trump presidency and under Obama/Biden before that. Trump called the recovery under Obama slow. To judge the merit of that claim, see the GDP growth rate for the US by year.

One highlight of the debate was that Trump did not categorically denounce white supremacy groups. However, it should be noted that Chris Wallace had asked Trump the same question in 2016 and Trump had denounced them then. Trump talked about his support from law enforcement organizations around the country and accused Biden of calling African Americans "super predators" when he co-wrote the 1994 crime bill. This is a video of Biden warning of "predators" in a speech in support of his bill but there is no reference to African Americans. From a Reason magazine fact check of the claim:

The rise of criminal justice reform as a major issue in politics has made the 1994 crime bill a liability for Biden, who has since apologized for his role in tough-on-crime legislation passed in the 1980s and '90s by large bipartisan margins. In a speech last year on Martin Luther King Jr. Day, Biden said those bills "trapped an entire generation," and that "it was a big mistake when it was made."

Trump vs Clinton in Opinion Polls 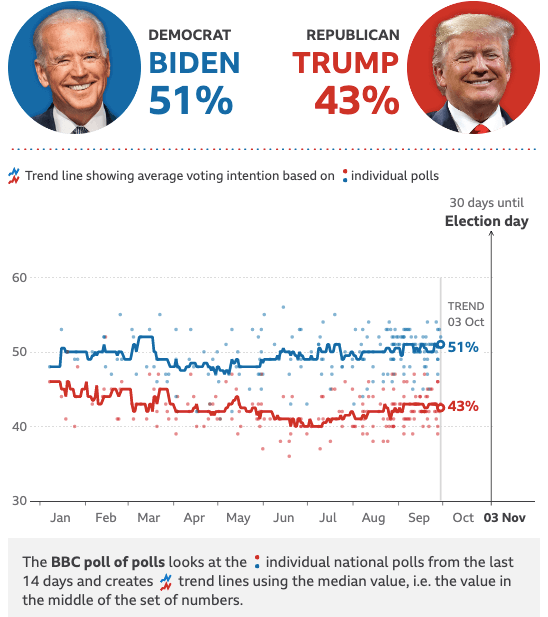 The BBC's poll tracker plots the median value of each candidate's support in the trailing 14 days' national polls.

RealClearPolitics also compiles an average of national polls, which mirrors the Wikipedia compilation above and shows Biden leading Trump consistently throughout 2020.

Another tracker of national sentiment is compiled by FiveThirtyEight.com. Their visualization also shows Biden has a lead of roughly 8 percentage points as of October 3, 2020.

It should be noted that opinion polls can paint a misleading picture. In 2016, these same models and averages showed Clinton leading Trump by 3 to 4 percentage points. And although Trump lost the popular vote, he did win the electoral vote and therefore the presidency.