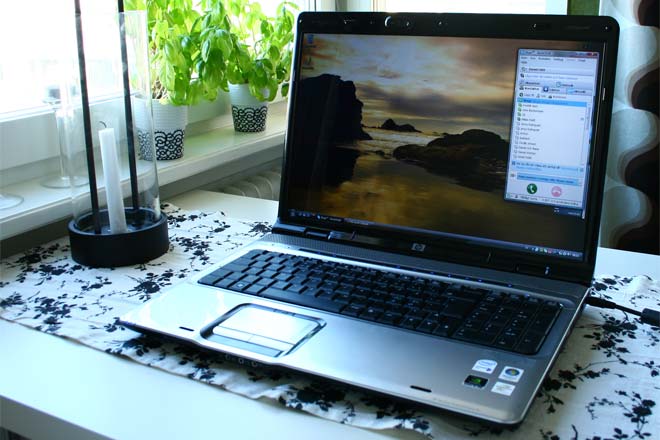 A laptop computer, or simply laptop, is a portable computer which usually weighs 4-8 pounds (2 to 4 kilograms), depending on display size, hardware, and other factors. A notebook is a personal computer that foregoes some functionality to remain lightweight and small. Notebook computers typically weigh less than 5 pounds and are small enough — "notebook sized" — to fit easily in a backpack or briefcase.

Initially, laptops were created to emulate the functionality of desktops; however, demand for laptops for entertainment purposes has led to the development of more compact devices, such as netbooks and tablets. Notebooks were also designed to function similarly to desktops, but were geared more toward personal use than business use. The handy notebook size was what defined notebook computers. When they were first released, they did not even have a replaceable hard disk or other associated peripherals.

Laptops were created to imitate the full functionality of a desktop unit with the addition of portability. Notebook computers were meant to be light and provide "bare bones" laptop functionality. Initially, hard drive capacity and RAM were usually much higher in laptops, and many offered CD/DVD drives that matched those found in desktop units. However, as chip sets and hardware capabilities have expanded, the differences between a laptop and a notebook computer have blurred, both in size and functionality.

Laptops were originally marketed as "business" machines, capable of using spreadsheet, presentation, and financial software packages, just as desktops could. Notebooks were mainly marketed for "personal" tasks, such as email, writing, entertainment, and file management. The biggest difference between the two eventually became the size and weight of the battery, with laptops boasting 2-3 times the battery life of notebooks, but also weighing 3-5 pounds more.

As hardware capabilities increased, laptops became powerful enough to become primary computers for many people. Despite being more expensive than desktop units, the computer had become a personal device used for much more than office or schoolwork, so portability was a key feature. The growth of smartphone and tablet use also reduced the need and usability of a desktop unit, as well as the need for a large laptop. Notebooks also started featuring high-resolution screens, while the need for DVD drives was reduced as broadband Wi-Fi and streaming through services like Netflix and Spotify became ubiquitous.

In 2007, laptop sales declined for the first time since 1998, while notebook sales rose. Even so, the rise of tablet computers slowed notebook sales in 2010. What has emerged from this proliferation of portable computing devices is a nuanced market, with laptops occupying the high-end user niche (graphic artists, executives, freelancers), notebooks used primarily by students and highly-mobile workers, and tablets used widely by the general public.

A big advantage of laptops is that they can be configured in many ways for different tasks and needs. For example, a common laptop configuration for playing games includes expanding RAM, adding a high-end graphics and video card, and "overclocking" (removing limitations) on the hardware to allow for faster response times.

The typical laptop nowadays has a 1 terabyte (TB) drive or a solid state drive (SSD), the latter of which is hundreds of times faster than hard drives were 10 years ago. RAM capacity is often 4-12 GB, screens feature large HD resolutions (and sometimes retinal displays), and battery life is about 6-10 hours. Many laptops are large enough to offer a full keyboard, are usually about 13-18 inches wide, and weigh 4-8 lbs. on average.

Notebook computers are less likely to offer a full-sized keyboard, ranging from 8.5 to 12.5 inches. The average notebook offers about 512 GB on the hard drive, with some models now offering an SSD option of up to 1 TB. RAM is usually 2-4 GB, and screen quality can vary. Two major differences between current laptops and notebooks are found in battery life and weight: notebooks tend to have a much longer battery life (ranging from 5 to 14 hours) typically weigh in at under 5 lbs.

There is a hybrid niche of extremely lightweight portable computers that feature full-sized keyboards, but below-average hardware capabilities. An example from this category would be the MacBook Air, which has a 13.5-inch screen and a full-sized keyboard, while weighing less than 3 pounds. The battery life is rated at 7 hours, but depending on use, it can extend up to 13 hours. The basic MacBook Air does not offer ports for connecting other devices, has a limited 360 GB hard drive, and has no DVD drive.

Prices for new laptop computers vary widely depending on screen size and hardware configurations. Low-end laptops tend to go for under $500, while high-end laptops used for advanced work-related tasks or gaming can easily exceed $1,000. Apple's Mac laptops will generally be more expensive than comparable PC laptops.

Notebook computers are cheaper than laptops, with prices typically ranging between $150 and $350.

In 1976, the Xerox PARC division developed the Xerox NoteTaker, considered the first portable computer. It never reached the market, as only 10 prototypes were built. In 1981, the Osborne 1 was launched as the first commercially available portable computer. About the size of a tabletop sewing machine, the Osborne did not have any battery power, running only on electricity instead, but it allowed computer users to work with a computer while on the go.

In the span of barely 3 years, portable computer models started flooding the market. In 1982, Kaypro introduced the Kaypro II, which featured double-sided floppy drives (twice the storage capacity) and a larger CRT monitor. The first true laptop, the GRiD Compass 1101, was arguably released that same year. In 1983, Compaq launched its Compaq Portable, while Epson introduced the HX-20.

By 1988, portable computers had become smaller, as demonstrated by the Cambridge Z88. Though this portable computer was 16 times more powerful than the Osborne 1, its total weight had been halved.

The first "notebook computers" — so called because the size of these devices was roughly the size of a paper notebook — were the 1988 NEC UltraLite and the Compaq LTE, launched in 1989. These designs were then joined by the IBM ThinkPad, featuring the first 10.4 inch screen on a notebook computer. While these early notebooks averaged a little over 6 pounds, lighter and more powerful "sub-notebooks" began making their mark in 1993 with the introduction of the Gateway Handbook and the Hewlett-Packard OmniBook. The 4.4 pound Apple PowerBook was eclipsed by the Sony VAIO in 1997, the latter weighing in at under 2.5 pounds. Microsoft's Tablet PC computers were smaller still, and in 2007, Asus introduced the Eee PC, reducing screen and keyboard size while retaining full computer usage capabilities.

Both laptop and notebook sales have declined as the sale of smartphones and tablets have risen. However, outside the U.S., notebook computers are showing a slight increase in sales as these units combine lower cost and broad functionality that can best address infrastructures in the midst of growth, such as in South America and Africa.

It was so good and the words were simply understanding. Thanx.

I think the author is confusing notebook with netbook. The notebook is the same as a laptop. Most notebooks still have a CD/DVD reader/writer. Netbooks are the ones do not have a CD/DVD because they are meant mainly for network connectivity. The author changes his mind through the article about weight ranges, which is basically the only difference I find. The term laptop is almost not used anymore. I have a pretty heavy notebook which is a workstation model, more powerful than most notebooks, but could have perfectly been called a laptop.

I thought companies distanced themselves from the term Laptop after people left them on their laps and got burned resulting in lawsuits. The new term notebook means the exact same thing, internal DVD drive or not.