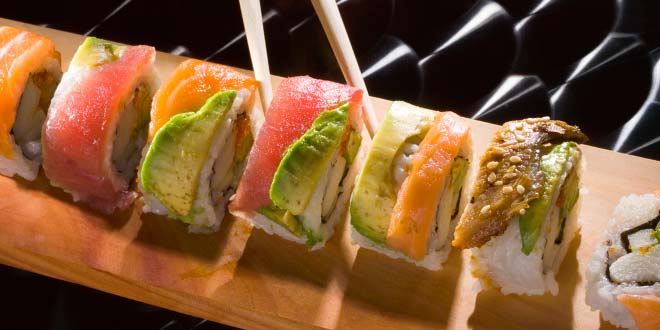 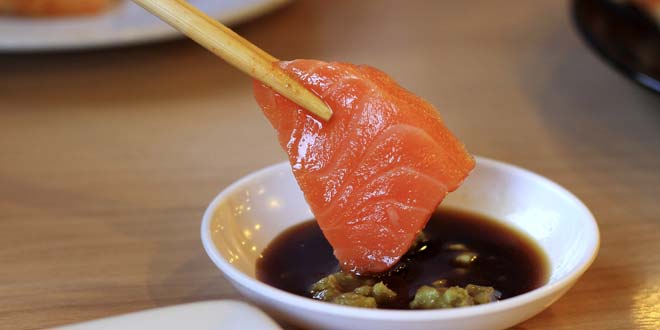 Nigiri is a specific type of sushi consisting of a slice of raw fish over pressed vinegared rice. Sashimi refers to just slices of very fresh fish or meat served raw, often over a bed of shredded daikon radish. Contrary to popular belief, sashimi is not sushi, even though you will always find sashimi on the menu at all sushi places.

Nigirizushi, or nigiri is made with special sushi rice treated with vinegar . This vinegared rice, balled and pressed with two fingers forms the base of the nigiri. A slice of raw fish is then placed on the rice base, at times with a speck of wasabi.

Nigirizushi is usually served in pairs. Shown above is a plate of tuna and salmon nigiri

Both nigiri and sashimi are accompanied with pickled ginger and wasabi with soy sauce.

Nigiri in Japanese means two fingers (ni = two, giri = fingers). Nigiri sushi gets its name from the rice which has to be of a very specific portion and fit on the chef’s “two fingers” when pressing. Sushi is a Japanese term that refers to anything made with vinegared rice.

Sashimi is a Japanese term for pierced flesh (Sashi = pierced, mi = flesh). The term may have originated from the culinary practice of sticking the fish’s tail and fin to the slices in identifying the fish being eaten. Another possibility for the name could come from the traditional method of harvesting - ‘Sashimi Grade’ fish is caught by individual hand line. As soon as the fish is landed, it is pierced with a sharp spike and placed in a body of ice. This spiking is call the Ike Jime process.

The most popular fish toppings for nigirizushi are Maguro (tuna), Sake (salmon), Hamachi (yellowtail), Hirame (halibut), Ebi (cooked jumbo shrimp), Tamago (egg omelet) and Unagi (fresh water eel). These are popular because most sushi beginners find these easier on the palate. You will also often find Tako (octopus), Ika (squid), Kani (crab), Ikura (salmon roe), Awagi (abalone) and Kazunoko (herring roe), which have a distinct flavor and takes some getting used to.

Most sushi first-timers curious about fresh fish find sake (salmon) nigiri the easiest and best place to begin their sushi experience. Simple, unique-tasting and very palatable, nigiri is also very simple to make. The video below walks you through how nigiri is made:

Sashimi as an Art Form 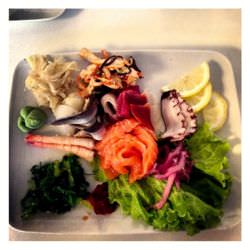 Sashimi chefs take a lot of pride in presenting the right sashimi. Much as sliced raw fish looks like the simplest form of food, sashimi can be appreciated at several levels and with all senses. One of the simplest and most elegant ways to enjoy fish, sashimi is typically eaten at the start of the meal, before the heavier dishes start crowding the palate. Diners’ palates are fresher and more discerning of the nuances between each type of fish during the earlier courses of a multi-course meal. What makes sashimi an exquisite delicacy is that no two fish taste exactly the same, and even different cuts of the same fish can yield vastly different flavors and unique textures.

Sashimi chefs consider it their pride and signature creating unique sashimi through various cuts, presentations, sauces and garnishes. Below is a video tutorial on how to make a beautiful sashimi platter: