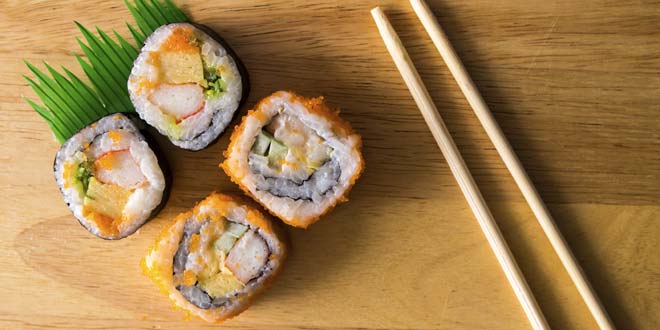 Sashimi is thinly sliced raw meat—usually fish, such as salmon or tuna—that is served without rice. Sushi is not raw fish, but rather vinegared rice that is mixed with other ingredients, which may or may not include raw fish.

In some countries, the terms "sashimi" and "sushi" may be used interchangeably, but this is incorrect usage. Raw fish is one of the traditional ingredients in sushi but sushi may also be made without meat or with cooked seafood as long as it uses vinegared rice. Sashimi, on the other hand, always contains fresh raw meat or seafood.

How many calories and carbs, or how much fat, fiber, or protein, is in a sashimi or sushi dish often depends on the fish or meat used in it. Generally, sushi has more calories and carbs because it uses rice and other ingredients, like mayonnaise, that sashimi does not. Because both dishes often use fish, they tend to be high in omega-3 fatty acids. Most research on the health benefits of omega-3s is inconclusive at this time.

Tuna and salmon are two of the most popular fishes used in sashimi, but there are numerous other kinds of meat and fish used beyond them. Sea bream, mackerel, and yellowtail are common, as are some shellfish and mollusks, such as squid or octopus, shrimp, scallops, and clams. Salmon eggs and sea urchins can also be found. Due to the increased risk of foodborne illness, raw red meat, such as horse, is less frequently consumed, but it does exist. The video below discusses how to slice and serve sashimi.

There are many kinds of sushi, but all contain vinegared rice. Sushi rolls are often wrapped in dried sheets of seaweed, rice paper, or yuba (soybean skin). Some of the most common types of sushi include nigiri, gunkan (small dried seaweed cups filled with seafood), and temaki (nori seaweed "cones" containing seafood and vegetables). Norimaki, or sushi rolls, are also very popular, but they are often made differently outside of Japan. In Japan, the rice and other ingredients in sushi rolls are wrapped in dried seaweed; outside of Japan, sushi rolls are often made with rice on the outside and seaweed and other ingredients on the inside. Watch the video below to learn how to make traditional sushi at home.

Part two of the process above can be seen here.

Some stores sell sashimi- or sushi-grade fish. However, such labels are really only marketing buzzwords, as the FDA has no clear guidelines on what fish is considered sashimi- or sushi-grade. Within the U.S., the main requirement for fish that is intended to be eaten raw is that it must first be frozen, as this minimizes the risk of foodborne illnesses.

Whether fish is eaten raw or cooked, mercury and other heavy metal contaminants are a concern and consuming large quantities of sashimi or sushi is not advised. Women who are pregnant or those who have compromised immune systems are told to avoid raw fish and to limit the consumption of certain cooked fish, including tuna.

Freezing raw fish before eating it will kill any parasites. Freezing will not, however, remove all pathogens and microorganisms, some of which could cause health problems. For those with compromised immune systems, cooking fish is strongly advised.

After the Fukushima Daiichi Nuclear Disaster

Following the 2011 nuclear disaster in Fukushima, Japan, some have been concerned about radiation in fish, but with the exception of fish caught near the coast of Fukushima, there is little to no cause for concern. Japan has also implemented new, stricter limits on the presence of radioactive cesium in food.