RAID stands for redundant array of independent disks. RAID is a data storage mechanism that uses multiple physical storage disks that are work together as a single virtual drive. Data is spread across all the physical disks. There are several RAID configurations, called RAID levels. Standard RAID levels are 0 through 6. Elsewhere we have compared other RAID levels such as RAID 0 vs. RAID 1 and RAID 5 vs. RAID 10.

This comparison looks at RAID 5 and RAID 6 in detail to understand their similarities and differences.

The definition of a RAID 5 storage system, according to the Storage Networking Industry Association (SNIA) is:

A placement policy using parity-based protection for storing stripes of 'n' logical blocks of data and one logical block of parity across a set of 'n+1' independent storage devices where the parity and data blocks are interleaved across the storage devices. Data stored using this form of RAID is able to survive a single storage device failure without data loss. 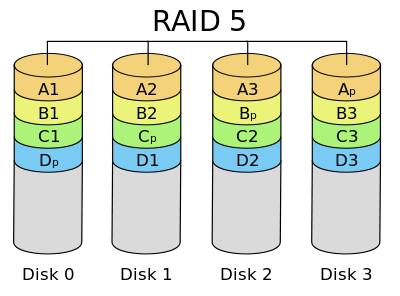 Example of a RAID 5 configuration. Data and parity blocks are grouped by color to easily identify which parity block is associated with which data blocks.

Considering that data blocks are striped across at least two disks and the parity block is written on a separate disk, we can see that a RAID 5 configuration requires at least 3 physical drives.

According to the SNIA, RAID 6 is defined as:

A RAID 6 configuration is similar to RAID 5 in that it uses striping and parity blocks. The difference is that it stores two parity blocks, allowing for extra redundancy so that even if two of the disks fail, information is still recoverable. 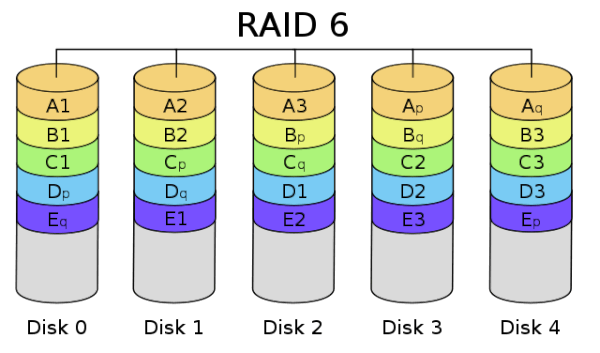 Example of a RAID 6 configuration. Data and parity blocks are color-coded to

The video below explains the differences in RAID 5 and RAID 6 levels.

Both RAID 5 and RAID 6 are fault tolerant systems. i.e., data is not lost even when one of the physical disks fails. RAID 5 can tolerate the failure of any one of its physical disks while RAID 6 can survive two concurrent disk failures.

What's more, both RAID 5 and RAID 6 can continue being used when the failed disk is being replaced. This is called hot-swapping. 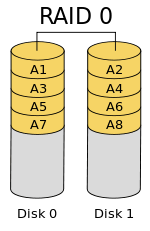 In RAID 0, data is split into blocks stored across multiple disks.

Striping is a technique to split data into blocks that are stored across different physical disks. A good example of this is RAID 0, which uses striping.

The advantage of striping is that reads and writes are very fast because they happen from multiple physical disks in parallel. This is especially advantageous in HDD disks because they use mechanical components for reading and writing.

The disadvantage of simple striping is that if one of the disks fails, all the data is lost. There is no way to reconstruct the information if certain data blocks are missing.

In order to make a RAID system fault tolerant, it would need to store information in a redundant fashion. i.e., the same information would have to be stored on multiple disks. So if one of the disks fails, data is still present and recoverable from another of the surviving disks.

There are ways to implement redundancy. A simple way would be to store a copy of each block of data on two physical disks. That is how RAID 1 is structured. 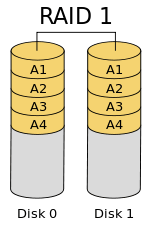 In a RAID 1 setup, redundancy is achieved by storing multiple copies of the data on different physical disks.

Another way to make a RAID configuration redundant is to use parity information. This is what both RAID 5 and RAID 6 use for more efficient redundancy.

RAID 5 can tolerate the failure of 1 disk. Data and parity information stored on the failed disk can be recalculated using the data stored on the remaining disks.

What happens when a disk fails in RAID 5?

Not only can data be recovered when one of the disk fails, the RAID 5 system remains operational throughout because data is accessible and reads are possible from a RAID 5 even when one of the drives has failed and is being rebuilt. However, such reads will be slow because part of the data (the part that was on the failed drive) gets computed in real time using the parity block, rather than simply being read from disk.

RAID 6 has better fault tolerance than RAID 5 because RAID 6 can survive the simultaneous failure of 2 of its disks. This comes at the cost of higher redundancy. Since two parity blocks are needed for each data stripe, storage capacity of two RAID 6 disks is spent on fault tolerance.

Space Efficiency in RAID 5 vs. RAID 6

The capacity efficiency of a RAID system is the fraction of the physical storage capacity that can be productively used to store data. It is calculated by taking the disks that are not parity or mirror and dividing them by the total disks in the set.

For a RAID 5 system with n disks, the storage efficiency is (n-1)/n because 1 disk worth of storage is taken up by parity blocks, leaving n-1 disks for data storage.

For a RAID 6 system with n disks, the storage efficiency is (n-2)/n because 2 disks worth of storage is taken up by parity blocks, leaving n-1 disks for data storage. 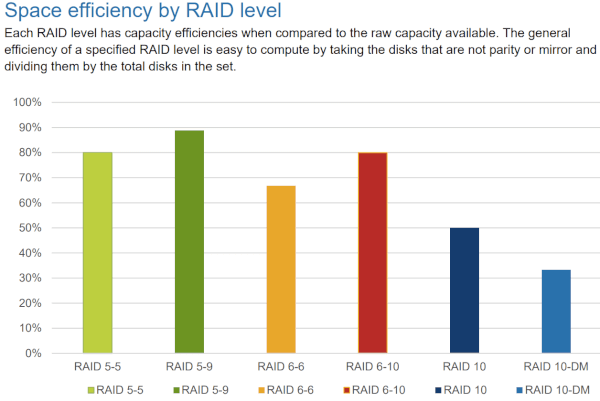 A comparison of the storage efficiency of some RAID 5 and RAID 6 configurations with RAID 10. Chart from Dell.

RAID 5 and RAID 6 both offer fast reads because of striping. Data is read from multiple disks in parallel, which speeds up reads. Write performance is slow, however, due to the overhead of calculating parity information. RAID 6 is a little slower than RAID 5 for write performance.

Both RAID 5 and RAID 6 offer fast reads and are hot-swappable, i.e., the system is functional and continues to support reads even when a failed disk is being replaced.

RAID 5 is more common than RAID 6. The advantages of RAID 5 over RAID 6 include:

The disadvantages of RAID 5 are:

RAID 5 provides a healthy balance of efficient storage, decent performance, failure resistance and good security. It is the most popular RAID configuration for enterprise NAS devices and business servers. RAID 5 is ideal for file and application servers that have a limited number of data drives. If the number of physical disks in the RAID is very large, the probability of at least one of them failing is higher. RAID 6 is a better option in such cases where it is important to have a higher degree of fault tolerance.