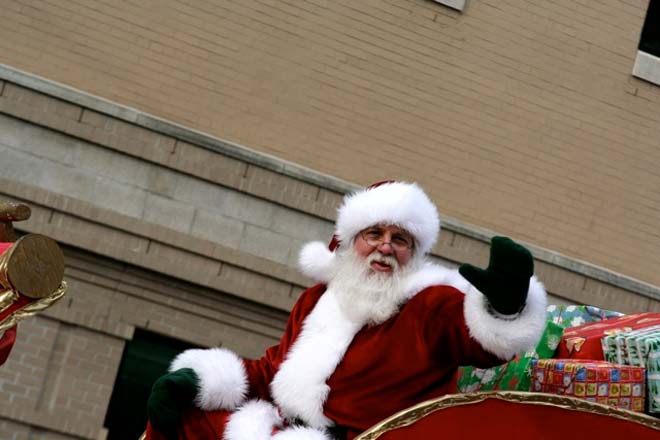 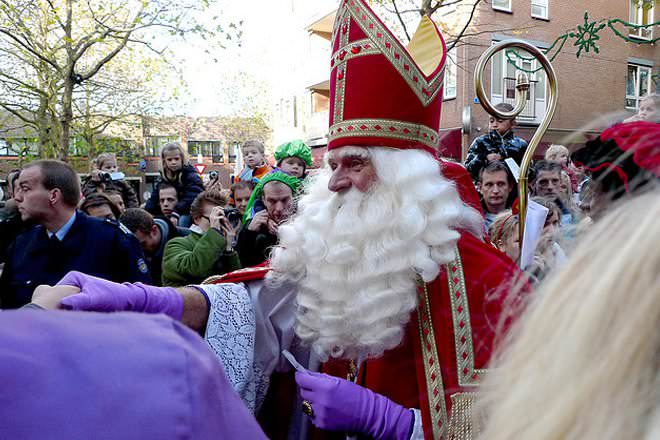 Sinterklaas (also called Sint-Nicolaas in Dutch and Saint Nicolas in French) is a traditional holiday figure in the Netherlands and Belgium, celebrated every year on Saint Nicholas' eve (December 5) or, in Belgium, on the morning of December 6. Saint Nicholas is the patron saint of, among other things, children. The figure of Santa Claus, and his role during Christmas, is largely based on the Dutch Sinterklaas. However, there are some differences between the two. 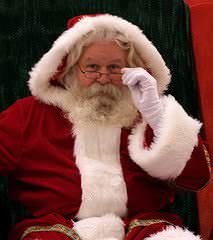 One of the most obvious differences between Sinterklaas and Santa Claus in the way they choose to travel. Santa (together with his helpers) uses a reindeer-drawn sleigh, which, due to the magical reindeer that pull it, is able to fly through the air. Sinterklaas comes to the Low Countries on a steamer, called Pakjesboot 12. When arrived he travels on his horse, a Gray called Amerigo (or Slechtweervandaag in Flanders), while his helpers walk. The horse however possesses magical powers, as it is able to walk over rooftops and make great leaps through the air.

Differences in preparation of gifts

Both Santa and Sinterklaas make use of helpers. Elves assist Santa Claus, while Zwarte Pieten help Sinterklaas. While Santa appears to make all the presents himself, his house is often represented as a toy factory. Sinterklaas on the other hand says he buys the presents in stores, which he can do due to being unimaginably wealthy, and then lets the Pieten wrap them.

Santa only deposits gifts between Christmas eve and Christmas morning, though he can be seen in the weeks before Christmas. Sinterklaas arrives in The Netherlands and Belgium some weeks before the 5th of December; His arrival is always broadcast on national television. During this period, before going to bed, children put their shoes next to the chimney of the coal stove or fireplace, with a carrot or some hay in it "for Sinterklaas's horse", sing a Sinterklaas song, and will find some candy in their shoes the next day, supposedly thrown down the chimney by a Zwarte Piet.

Differences in delivery of gifts

Both Santa Claus and Sinterklaas deliver their presents through the chimney. Santa uses "a little bit of magic" as he himself goes down the chimney, while Sinterklaas waits on top of the roof with his horse, while his Zwarte Pieten go down.

Both figures use fixed positions as to where the presents need to be placed. Santa places his around the Christmas tree and fills the stockings hanging above the fireplace. Sinterklaas exclusively places the gifts in front of the fireplace, and, instead of stockings, he fills shoes (which the children placed before the fireplace the night before) with candy.

Sinterklaas is used more often as a fear tactic by parents in order to get children to behave. Many Sinterklaas songs incorporate one basic element: children who've been good will receive presents and candy, the ones who haven't will receive nothing, will be beaten (often with small branches) by the Zwarte Pieten, or in the most extreme cases will be taken to Spain. Santa also cares whether children have been "naughty or nice". Santa has been known to leave only coal to those who are naughty although on the whole he's fairly lenient.

The history of Santa Claus varies quite a bit from Sinterklaas as well.

Sinterklaas does not have any shown or spoken about relatives. Santa however, is sometimes depicted as having a wife: Mrs. Claus. The reason why Sinterklaas has no wife or children is likely caused by the fact that he is largely based on Saint Nicholas, an early Christian bishop, and hence bound to celibacy.

Age of Santa vs. Sinterklaas

Technically both Sinterklaas and Santa Clause are the same figure, both based on Saint Nicholas of Myra. Hence they should, in theory, be of the same age, which would be 1737 (given that Nicholas was born in 270 A.D). However, both Santa and Sinterklaas never give an explicit answer when asked their age. Santa says he stopped counting at 550 and Sinterklaas says he's simply too old to remember.

Knowledge of each other

Santa Claus, seems to be oblivious to the existence of Sinterklaas. Sinterklaas however is aware of Santa's existence, and has said that they occasionally meet at his castle, adding that their meetings usually have several centuries in between.

Personality of Sinterklaas vs. Santa Claus

While Santa is often very punctual and rarely forgets anything, Sinterklaas can appear to be almost senile at times, needing the help of his Zwarte Pieten to remind him of what he was or was supposed to be doing.