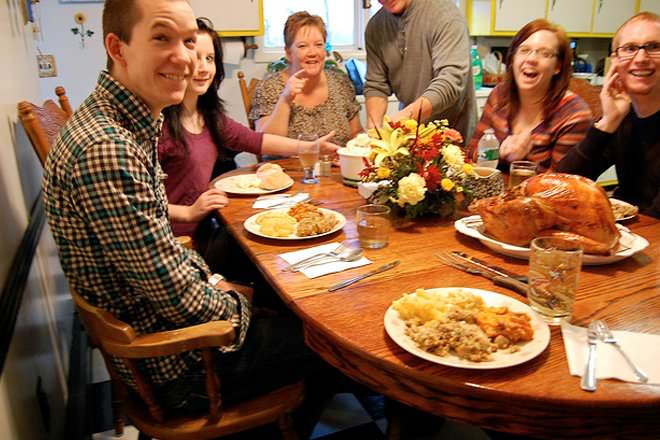 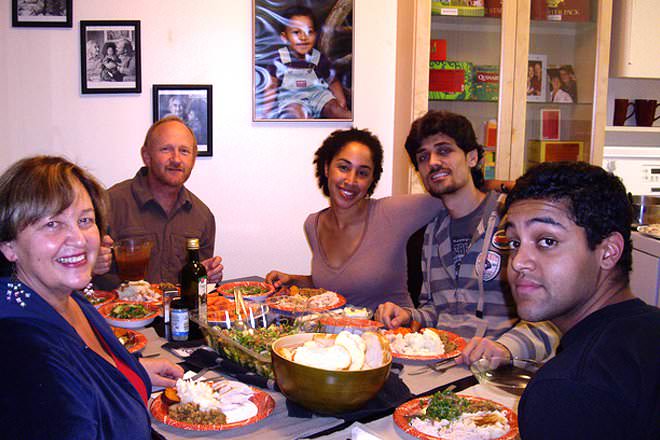 Thanksgiving in Canada originated purely as a harvest festival. On January 31, 1957, the Canadian Parliament proclaimed:

A Day of General Thanksgiving to Almighty God for the bountiful harvest with which Canada has been blessed – to be observed on the 2nd Monday in October.

English explorer Martin Frobisher hosted the first Canadian Thanksgiving. It was held in what is now Newfoundland during his expedition's attempts to find the Northwest Passage to the Orient in 1578 and marked their safe arrival to the New World. So it was not hosted to celebrate a bountiful harvest. With time, French, Scottish and German immigrants to Canada added some of their traditions to the harvest festival. American traditions like the turkey were added by the United Empire Loyalists around the time of the American Revolution.

The first American Thanksgiving was celebrated 43 years later in 1621 at the site of Plymouth Plantation, in Massachusetts. The Wampanoag Native Americans helped the pilgrims who arrived in Massachusetts cultivate the land and fish, saving them from starvation. At harvest time in the winter of 1621, they were very thankful that they had a good crop of food to eat during the coming winter. They thanked God and the Wampanoags for teaching them how to grow crops. The Thanksgiving holiday became a national phenomenon during the Civil War and a true national holiday during FDR's presidency. This article in the New York Times describes in detail the history of the Thanksgiving holiday and its various proponents, from Sara Hale to George Washington to Lincoln to Franklin Roosevelt.

Similarly in Canada, the festival did not have a fixed date until the late 19th century, at which time it was typically held on November 6. In 1957 the Canadian Parliament proclaimed Thanksgiving to be observed on the 2nd Monday of October. Thanksgiving is a 3-day weekend in Canada.

There are many common Thanksgiving traditions in Canada and the United States.

In both countries Thanksgiving is a time to get together with family. In the U.S. the Thanksgiving holiday weekend is the busiest travel day of the year. Some Canadians use the 3-day holiday for a weekend getaway. 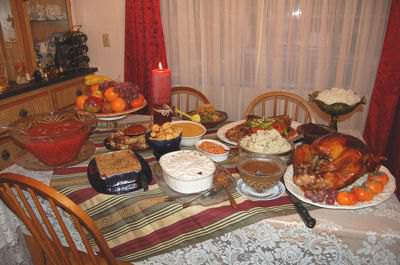 During the American Revolution, Americans loyal to England moved to Canada and brought along Thanksgiving customs and practices. So there are many similarities in the Thanksgiving meals in both countries.

The featured item in a traditional Thanksgiving meal in America is turkey (Thanksgiving is sometimes called "Turkey Day"). The meal is usually a feast cooked for 5-10 people because families (and friends) often get together on this day. Stuffing, mashed potatoes with gravy, sweet potatoes, cranberry sauce, sweet corn, other fall vegetables, and pumpkin pie are commonly associated with Thanksgiving dinner.

There are some differences between Canadian and American recipes for Thanksgiving. For example,

The traditional Thanksgiving meal is dinner on Thursday in the U.S. whereas in Canada the feast could be held either on Sunday or Monday.

In America the day after Thanksgiving is characterized by heavy shopping, encouraged by several enticing deals and discounts offered by retailers. Stores typically open early on Friday morning and people line up at night to be the first ones through the door when stores open so that they get the choicest "doorbuster" deals. The day is called "Black Friday" because traditionally that is the day when retail stores go from red to black (turn a profit) for the year. The Monday after Thanksgiving is called "Cyber Monday" because of the heavy online shopping people do on that day.

Thanksgiving in the United States is characterized by large parades, the Macy's Parade being most well known. Parades in Canada are smaller and at a local level. The Kitchener-Waterloo Oktoberfest parade serves as Canada's only Thanksgiving Day parade and is broadcast nationwide. Canadians also enjoy football on Thanksgiving Day - the Canadian Football League holds a nationally televised doubleheader known as the "Thanksgiving Day Classic".

Thanksgiving is not a four-day holiday in the US. Only the Thursday is considered a federal holiday. Many employers DO give their employees the day off, but this is not universal.

As for the foods, most of the American foods listed seem to describe Southern cuisine. In other parts of the country, the dishes are more like the Canadian ones listed.

I grew up in the American South & we always used marshmallows on our sweet potatoes - try 'em, yum, yum...