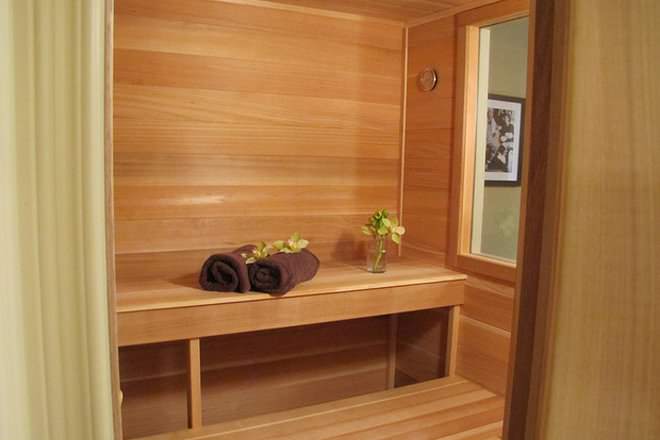 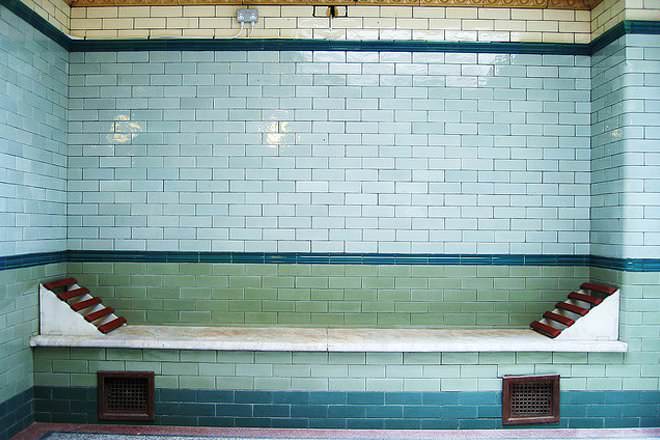 While steam baths use moist heat, saunas offer dry heat sessions. Steam rooms are kept at around 100 to 114 degrees Fahrenheit while saunas are much hotter - up to 100 °C (212 °F, the boiling point of water). Both these types of hot baths stimulate blood flow and promote healthy metabolism but some people find it difficult to breathe in the dry heat of a sauna. So people with respiratory problems like sinus congestion and asthma may prefer the moist heat of steam baths. Moist heat also benefits people with joint pain or other body pains.

What is a Sauna?

A sauna has low humidity and is much hotter than a steam room. There are 2 styles of saunas: conventional saunas warm the air in the room and infrared saunas that warm objects using charcoal or active carbon fibers has heating material. They are often heated with stones placed on some kind of heater (usually electric or wood-burning); water is poured on the stones in small intervals that produce a thick cloud of steam. This has the effect of raising the temperature in the sauna by several degrees but the steam quickly disappears. Saunas are usually wood-lined and have wooden benches to sit on. They are insulated to retain the heat but there is no concern about moisture damage to the outside structure. People often use towels to place on the wood because it is uncomfortable to sit on extremely hot wooden benches.

What are Steam Rooms?

A steam room is a virtually airtight room where steam is fed with the help of a steam generator builds up a humidity level of around 100%. Steam rooms are usually finished in ceramic tile and the ceiling must be slanted so that the steam buildup does not drip from the ceiling onto the bathers. The primary goal of steam rooms is to make the bather sweat for detoxification purposes.

Saunas and steam rooms have similar effects on the body. Both cause increased blood flow through better circulation. They dilate blood vessels resulting in a lowering of blood pressure. The heat in steam rooms and saunas causes a lot of perspiration, which releases salt and some toxins from the body. Other health benefits include increased metabolism, an easing of tension in the muscles and promoting feelings of relaxation. The moist heat in steam rooms also helps with nasal congestion.

Saunas and steam rooms open the pores in the skin and make you sweat, which releases some toxins from the body and cleanses and rejuvenates the skin. This may be beneficial for people with acne because impurities in the skin are one of the causes of acne.

There are lots of microbes in steam rooms. This causes risk of athlete's foot and fungus on the floor. Always wear flip flops when entering a sauna or steam room. Another common risk is dehydration and hyperthermia. Always stay well-hydrated and drink water before and after using a sauna. Avoid steam rooms if you have very high or low blood pressure, epilepsy or have consumed any alcohol, tranquilizers or antibiotics.

Improper installation of steam baths may lead to headaches for the users. Some people find the dry heat of the sauna to be uncomfortable to breathe. Those with respiratory problems like sinus congestion and asthma may prefer the moist heat of the steam bath.

Though some people claim that using saunas and steam rooms helps in losing weight, there is no scientific evidence to support this claim.

A brief history of Steam Baths and Saunas

Saunas originated in Finland and the Baltic countries. The word sauna is an ancient Finnish word referring to the traditional Finnish bathhouse (and the bath itself). They featured a fireplace where water was thrown over hot stones to produce steam.

A steam bath is defined as an ancient type of bath which was made popular and was used first in ancient Greece and Rome. Its origins started from the Roman bath. Early saunas were mostly small pits dug in a sloppy area of the earth and mainly used for staying there during harsh winters. Stones were heated up in a fireplace and once they were hot water were used to throw over them to produce steam and additional heat however, more sophisticated sauna houses came into being only in 19th century Finland.